Add an Event
Newswire
Calendar
Features
Home
Donate
From the Open-Publishing Calendar
From the Open-Publishing Newswire
Indybay Feature
Related Categories: San Francisco | Labor & Workers
Rehire Namibia Mineworker Union Rossing Leaders Pres Xi! Rally At SF Chinese Consulate
by Labor Video Project
Saturday Feb 13th, 2021 11:35 AM
A solidarity rally was held in San Francisco at the Chinese Consulate to call on Chinese president Xi-Jinping to rehire the fired Namibia Mineworkers Union Rossing Branch 9 executive board members. They were illegally fired by the state owned Chinese National Nuclear Corporation (CNNC) after they refused to take concessions on their healthcare in the middle of the pandemic and also exposed the company's efforts to bribe the union leadership. 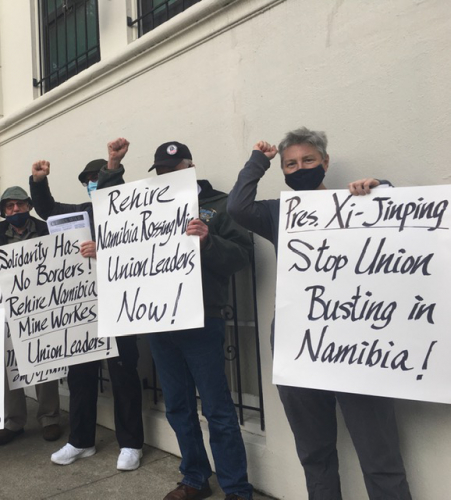 original image (578x640)
Trade unionists and workers spoke out at the San Francisco Chinese Consulate on February 12, 2021 to demand that the Chinese government rehired the fired Namibia Mineworker Union Rossing branch. The Chinese National Nuclear Corporation (CNNC) which is controlled by the government has illegally fired the NMU Rossing union executive committee in September. They also recently fired a newly elected chairperson in an effort to completely destroy the union.
Speakers also opposed the US imperialist encirclement of China but said that internationalists must back the struggle of not only the Namibian workers but all workers around the world whether they work for Chinese companies or other US and European capitalists companies.
The rally took place before the labor arbitration hearing that is being held in Namibia on February 15, 2021 to
decide on the legality their discharges.

Swapo, what is 'Socialism with a Namibian Character’?
https://www.namibian.com.na/183845/archive-read/Letter-of-the-Week--Swapo-what-is-Socialism-with-a-Namibian-Character
Namibia says China can buy Rio's uranium stake if it respects laws
https://www.reuters.com/article/us-rio-tinto-namibia-china/namibia-says-china-can-buy-rios-uranium-stake-if-it-respects-laws-idUSKCN1SZ0UR 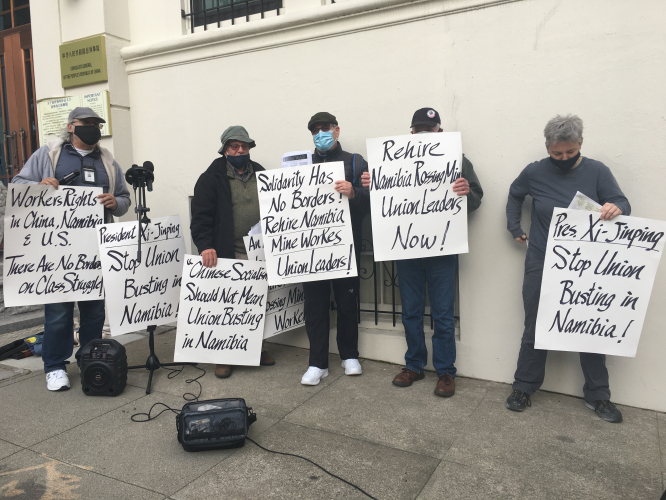 original image (4032x3024)
Workers and trade unionists in San Francisco rallied at the San Francisco Chinese Consulate to call on Chinese President Xi-Jinpin to rehire the Namibia Mineworkers Union Rossing Branch nine executive board members. Speakers opposed union busting not just in Namibia but in the US and around the world.
https://youtu.be/kjLdDEnONqo
§Soldiarity Has Borders
by Labor Video Project
Saturday Feb 13th, 2021 11:35 AM 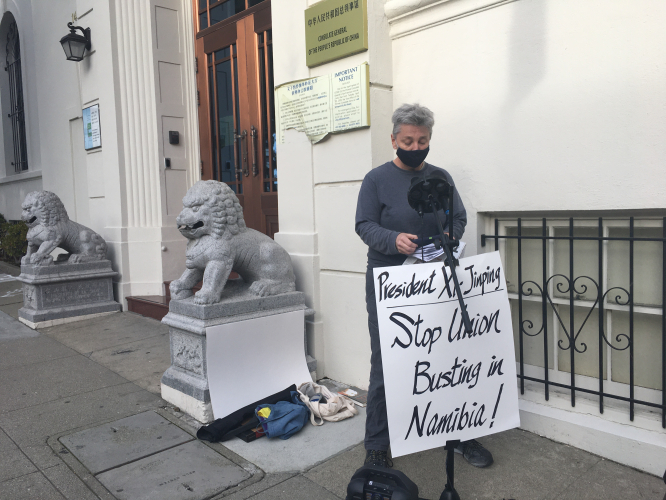 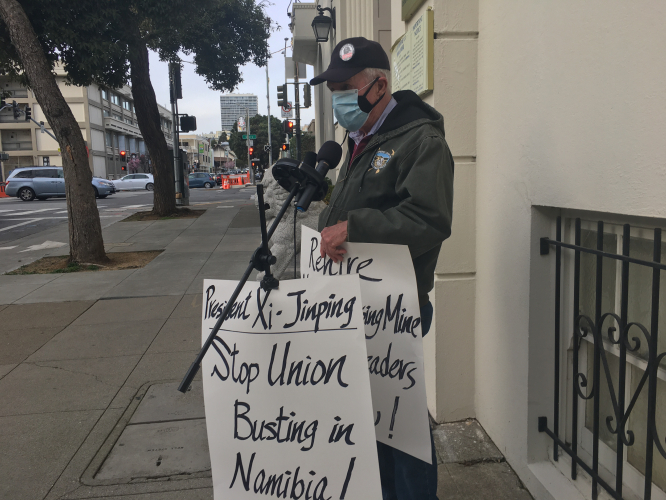 original image (1008x490)
In the midst of the Covid pandemic in Namibia, the state owned Chinese National Nuclear Corporation (CNNC) which runs the Rossing mine demanded that the miners to make concessions on there healthcare benefits. This effort to attack the health and safety of the Rossing miners in the middle of a pandemic and then the termination of their leadership is flagrant union busting and speakers at the rally demanded that the mine union leaders be rehired by Chinese president Xi-Jinping
https://youtu.be/kjLdDEnONqo
Add Your Comments
Support Independent Media
We are 100% volunteer and depend on your participation to sustain our efforts!