Add an Event
Newswire
Calendar
Features
Home
Donate
From the Open-Publishing Calendar
From the Open-Publishing Newswire
Indybay Feature
Related Categories: Santa Cruz Indymedia | Environment & Forest Defense | Health, Housing & Public Services
Live Oak Clothing Owner Stands by Violent Threats Directed at Homeless People
by Santa Cruz Vigilante Watch
Thursday Feb 11th, 2021 5:40 PM
Troy Swanner, the owner of Live Oak Clothing on Pacific Avenue in downtown Santa Cruz, is standing by comments he made on social media threatening vigilante violence against the homeless people who have been allowed under a federal judge's order to legally camp and shelter in place nearby in San Lorenzo Park. When confronted on social media on February 11, Swanner said: "I know exactly what I wrote so I really don't care if you screenshot it [...] I stand behind what I say." Troy Swanner made the violent and bigoted comments about the homeless people staying in the park on December 30, stating: "Me and the community are going to have to physically go do something about it [...] Like what we used to do to the homeless to make them clean up their s***." Swanner then elaborated, saying "we locals [...] used to beat the s*** out of the homeless that would spread their garbage around and leave needles. And it seemed to work a lot better than what's going on now." Swanner claims that most of the homeless people staying at San Lorenzo Park are not Santa Cruz locals, and should leave the area. (Photo: Comment made on social media on December 30 by Troy Swanner, more photos at end of article.)

On December 30, Swanner commented that his "plan" was to go to San Lorenzo Park with a "whole bunch" of "local" people to, "make all the people that are living in tents move their tents". He made the most violent and vigilante oriented comments following a visit to his store downtown by Melissa Freebairn, who showed him photos she said she took of the homeless camp at the park. Freebairn, an RN who has worked at the County of Santa Cruz and as a Nurse at Soledad State Prison/Correctional Training Facility (CTF), is a member of the now mostly defunct Santa Cruz Clean Team, a group formed to clean up areas where homeless people camp locally. Members of the Clean Team, past and present, push a strong anti-homeless political agenda, and conduct their clean up events in a manner that is hostile to homeless residents.

On February 9, one community member posted on social media about a conversation they had with Troy Swanner the evening before: "Had a long conversation with Troy last night. He dodged and weaved, but said he still supports assaulting the homeless. Appalling."

On February 11, after a person asked him on Swanner's personal Facebook page if he was "the guy that wants to beat up homeless people," Swanner said he stood by his violent comments. Melissa Freebairn quickly added her voice to that conversation, telling Swanner the person who asked the question was just "trolling" him.

Roxann Burdick also commented on the post, saying the person was, "another coward just spreading a false narrative," and that she would be seeing Swanner soon to buy a sweatshirt at his store. Burdick, the owner of Stranded Beauty Bar in Santa Cruz, has recently been working with Melissa Freebairn on local homeless issues. When community members first began raising awareness on social media about Swanner's hateful comments towards the homeless, a possible boycott of Live Oak Clothing was brought up. At that time Burdick went on Live Oak Clothing's Facebook page to support Swanner. Referencing the "boycott," she told him she planned on buying some clothes at the store.

Neither Melissa Freebairn or Roxann Burdick have publicly condemned Swanner's violent statements, and continue to seek his support. Swanner has described his relationship with Freebairn and Burdick, since he made the violent comments, as follows: "I have been talking with this group personally and helping them share when they're going to have clean-ups they actually appreciate what I'm doing and to share the good job that they're doing they understand that I'm trying keep my business going."

Swanner's violent comments on social media have not been moderated, and are still visible in the SCCCP - Santa Cruz & Central Coast Politics group on Facebook. 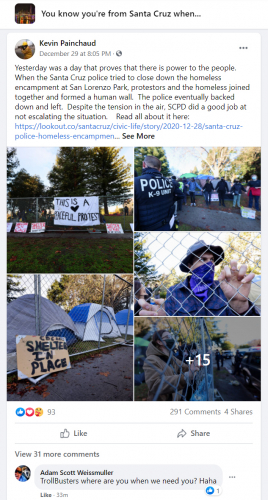 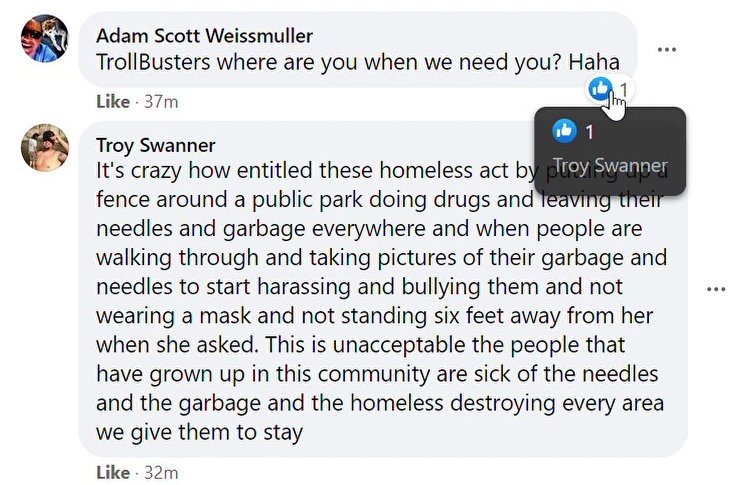 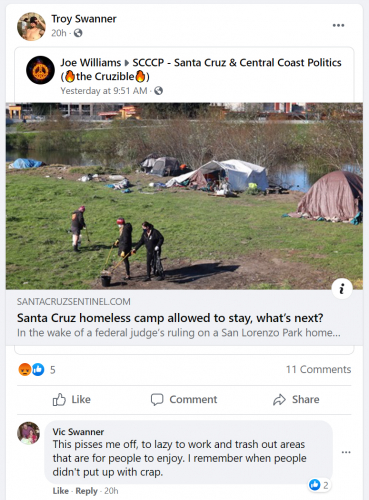 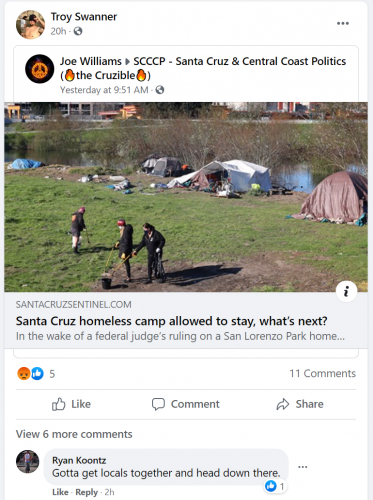 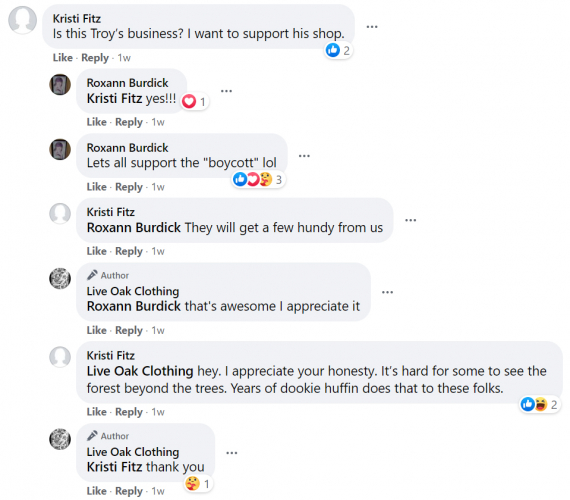 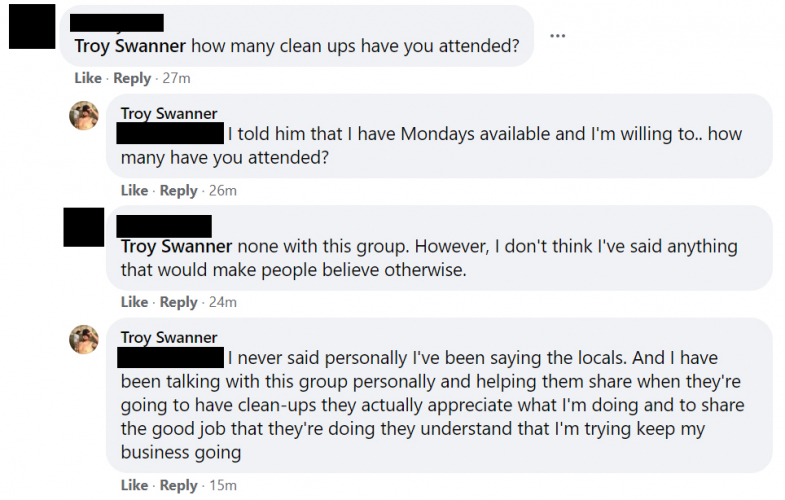 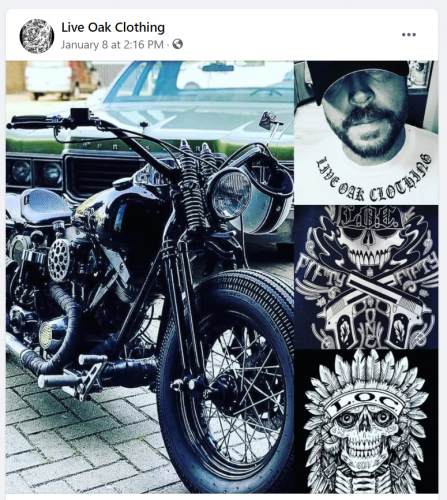 original image (775x866)
Troy Swanner opened his Live Oak Clothing store downtown in October of 2020. Live Oak is a neighborhood in the unincorporated area of the Eastside of Santa Cruz, quite a distance from the downtown area. The Live Oak Clothing brand uses the acronym "LOC" on its clothing. One of the designs printed on t-shirts by the business shows a skull wearing a cap with LOC on it, positioned above two guns, with the number "5150" spelled out. 5150 refers to the California law code used by authorities to commit individuals who are a danger to themselves (or others) due to signs of mental illness.
§Live Oak Clothing
by Santa Cruz Vigilante Watch
Thursday Feb 11th, 2021 5:40 PM 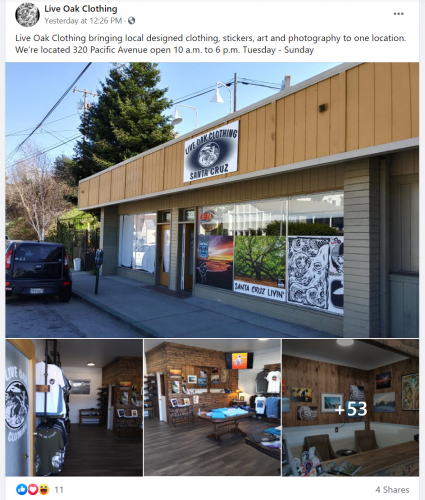 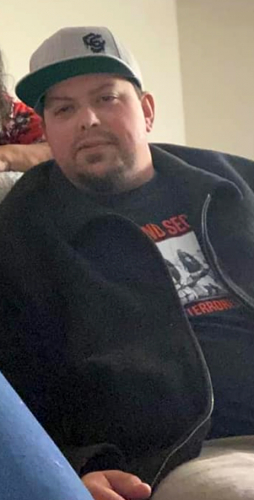 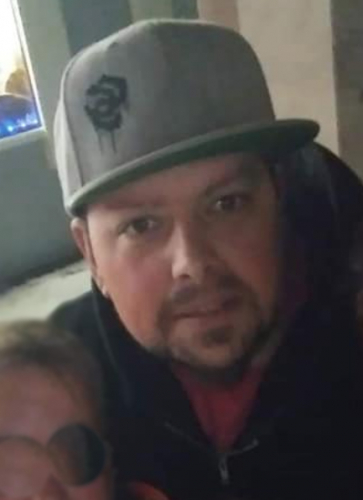 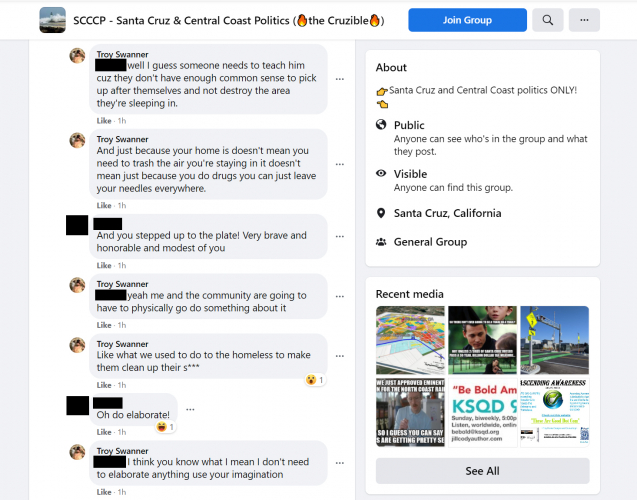 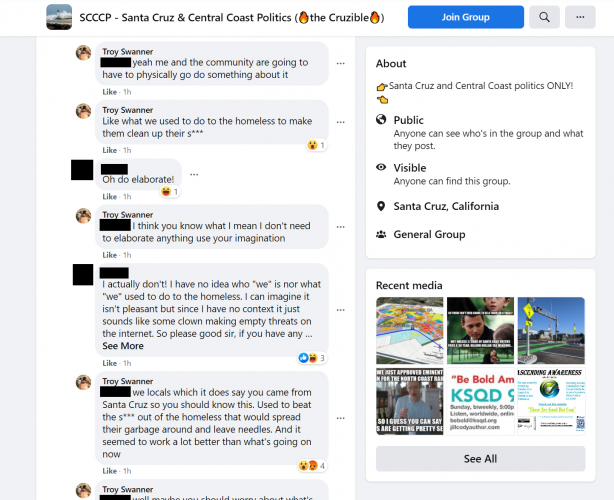 original image (1442x1174)
Comments made on December 30.
Add Your Comments
Support Independent Media
We are 100% volunteer and depend on your participation to sustain our efforts!