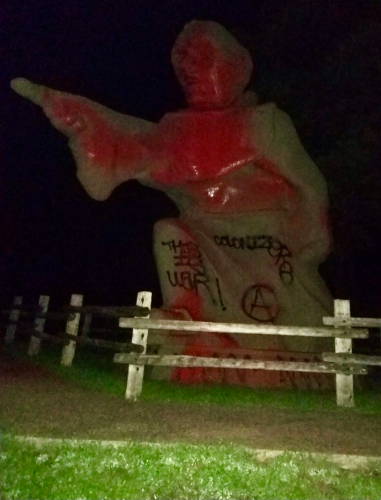 original image (1907x2500)
We vandalized the ugly ass Junipero Serra statue on Hwy 280 in "San Mateo County" (Ramaytush Ohlone territory) in solidarity with the Indigenous Peoples' Day 5, who have been accused of toppling the Junipero Serra statue outside Mission San Rafael (Coast Miwok territory) on October 12, 2020. We used a fire extinguisher filled with half water and half red latex paint to drench Junipero's busted ass face to make visible the blood on his hands. We also crossed out the glorified names of all the missions he founded. We send our solidarity to all indigenous resistance to colonization and white supremacy.

Junipero Serra founded the California mission system where indigenous peoples were enslaved, raped, tortured, and imprisoned in genocidal conditions. The Catholic Church has canonized Serra as a saint. Far-right San Francisco archbishop Salvatore Cordileone (also notorious for his anti-queer and anti-choice bigotry) has spearheaded the prosecution of the Indigenous Peoples' Day 5 in the settler-colonialist court system and conducted exorcisms at sites where Serra statues have been toppled. These are acts of ongoing colonization and will be met with resistance.

Cordileone has said that he hopes that the prosecution of the Indigenous Peoples' Day 5 will "contribute to putting an end to attacks." The fascist archbishop could not be more mistaken. The attacks will escalate until every structure of white supremacy is destroyed! This is war!
Add Your Comments
Support Independent Media
We are 100% volunteer and depend on your participation to sustain our efforts!