Add an Event
Newswire
Calendar
Features
Home
Donate
From the Open-Publishing Calendar
From the Open-Publishing Newswire
Indybay Feature
Related Categories: California | Central Valley | Environment & Forest Defense | Government & Elections | Health, Housing & Public Services | Racial Justice
Earthworks report reveals CA fails to safely manage radioactive and toxic oil wells
by Dan Bacher
Wednesday Feb 3rd, 2021 11:03 PM
Estela Garcia, impacted resident and member of the Committee for a Better Arvin,” said, “In my community, there are many people who are sick - with asthma, with allergies, and many many people suffering from cancer. Here in Arvin, there are wells near schools and near apartments. There are wells that supposedly aren't operating, but a terrible smell comes to you if you get close to these sites.”

“This pollution affects everyone in the community. So if you ask me, ‘what would you change in your community’, I'd say ‘get the wells out of our communities as much as possible,” concluded Garcia. 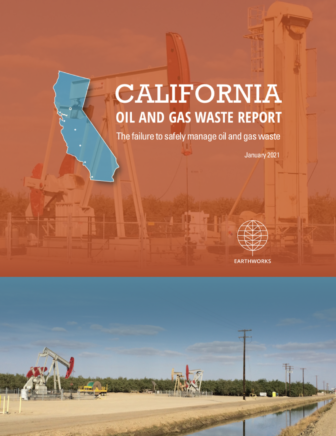 Sacramento — Between 2008 and 2018 alone, oil and gas companies created a statewide total of over 1.3 trillion gallons of oil and gas wastewater in California, enough liquid to fill over 17.6 million household bathtubs.

That’s one of the many findings of a new report released by Earthworks, along with allies VISION California and Center for Biological Diversity. The report reveals that California, often portrayed by the state’s politicians and national media as the nation’s “green” leader, is actually one of the worst states in the U.S. when it comes to regulating the oil and gas industry’s waste.

The regulatory failures range from allowing crops to be irrigated with potentially toxic and radioactive wastewater to storing waste in unlined pits or injecting it into protected groundwater aquifers, according to a press release from Earthworks.

These problems are just the latest in a legacy of regulatory failures in California, a history that government agencies and NGOs have documented in report after report — and I have documented in article after article — for many years.

It also comes after a year of record fires and an unprecedented pandemic when California oil regulators more than doubled the approval of permits in 2020 to drill new oil and gas production wells.

The California Geologic Energy Management Division (CalGEM) of the Department of Conservation, the state’s oil and gas regulatory agency, approved more than 1,700 new well permits in 2020, Consumer Watchdog and FracTracker Alliance reported. The two groups updated the permit numbers and locations on an interactive map at the website: http://www.NewsomWellWatch.com.

The Earthworks report also comes in advance of a state legislative push in 2021 to protect frontline communities through setbacks between oil and gas operations and homes, schools, healthcare facilities, and prisons. “Health and safety setbacks are a key demand from environmental justice advocates--particularly in Los Angeles and Kern Counties, where the bulk of oil and gas drilling takes place in California,” according to Earthworks.

“The harmful wastes produced from oil and natural gas extraction have several pathways by which they contaminate water, air and soil,” said Melissa Troutman, Earthworks’ Research and Policy Analysis and the report’s co-author. “Many of the pathways that lead to oil and gas waste pollution in California are legally permitted by the state, despite the detrimental effects.”

From 2017 to 2020, the Environmental Protection Agency exempted 21 water aquifers in California from federal drinking water protections to allow oil and gas companies to use those aquifers to dispose of their wastes. Eighteen of those exemptions are in Kern County, noted Troutman.

“As long as that waste exists, there will always be spills, equipment failures and other incidents outside of regulatory control. But California can stop a large portion of waste pollution by enacting stronger regulations, and the state can protect its most vulnerable residents by enacting protective setbacks,” she stated.

Recommendations in this report include the following:

No more “beneficial use” outside the industry – prohibit the use of waste on roads, crops, or for discharge to waterways after processing that does not include the disclosure of all chemicals for all operations.

No more waste in pits – prohibit the storage or disposal of oil and gas waste in earthen pits.
No more incomplete testing – require the full disclosure of all additives used in all well operations and the full characterization of waste prior to disposal, including testing for radioactive materials.

No more disposal in aquifers – stop using groundwater aquifers for the disposal of oil and gas waste.

No more guessing where waste is going – publicly disclose and map facilities accepting, processing, and disposing of oil and gas waste, including landfills, pits, and injection wells

No extraction or waste near sensitive receptors including homes, parks, community buildings, schools, medical facilities, and prisons – require a minimum 2,500 foot setback from all operations that produce, store, transport, process, use or dispose of oil and gas waste materials and sensitive receptors.

“Further oil and gas extraction under the status quo guarantees more pollution and risk to the environment and public health, with low-income and BIPOC communities bearing the worst health impacts. This is why the best policy option is to halt any further oil and gas permitting in California. However, with more extraction likely, in addition to the legacy of waste coming from existing wells, swift protective measures need to be enacted through legislation and/or regulatory rulemaking,” stated Troutman.

Scientists and impacted residents endorsed the report’s findings and recommendations.

“It's distressing to think about toxic chemicals in our rivers, radioactive waste on our roadways, and billions of gallons of hazardous wastewater pumped underground, contaminating groundwater and causing earthquakes,” said Dr. John Fleming, Senior Scientist at the Center for Biological Diversity. “This report shows the dirty, dangerous consequences of the oil and gas industry and why we urgently need a just transition away from fossil fuels.”

Estela Garcia, impacted resident and member of the Committee for a Better Arvin,” said, “In my community, there are many people who are sick - with asthma, with allergies, and many many people suffering from cancer. Here in Arvin, there are wells near schools and near apartments. There are wells that supposedly aren't operating, but a terrible smell comes to you if you get close to these sites.”

“This pollution affects everyone in the community. So if you ask me, ‘what would you change in your community’, I'd say ‘get the wells out of our communities as much as possible,” concluded Garcia.

However, by February 2019, it dropped to seventh largest producer in terms of barrels per month, according to the report. Yet California, considered by many to be the nation’s “green leader,” still produced over 160 million barrels per year.

The reason why California is one of the worst states in the U.S. when it comes to regulating the oil and gas industry’s waste is due to the uncomfortable fact that the oil industry is the most powerful corporate lobby in California and exercises enormous influence over the Governor’s Office, the State Legislature and the State’s regulatory panels, commissions and panels.

A classic example of deep regulatory capture in California is how Catherine Reheis-Boyd, the President of the Western States Petroleum Association, chaired the Marine Life Protection Act (MLPA) Initiative Blue Ribbon Task Force to create “marine protected areas” in Southern California at the same time that she was lobbying for new oil drilling off the West Coast.

For more information, read: http://www.counterpunch.org/…
Add Your Comments
Support Independent Media
We are 100% volunteer and depend on your participation to sustain our efforts!