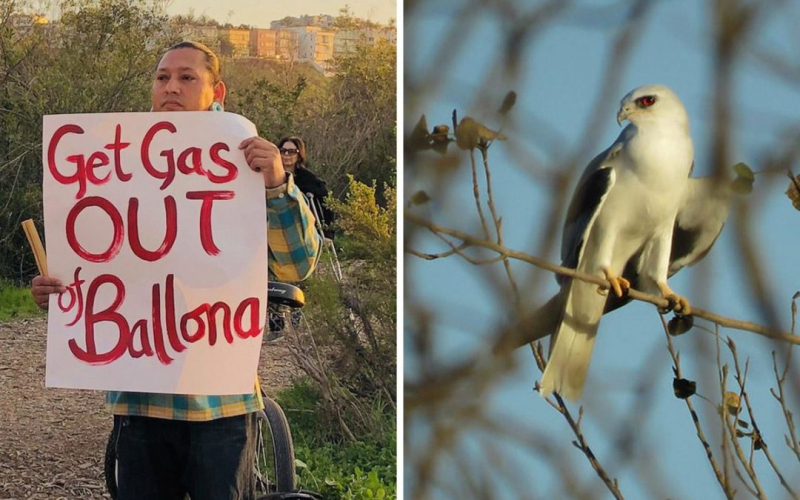 In 2000, California voters overwhelmingly approved Proposition 12, creating a $2.1 billion bond “to spend on acquisition, development, and protection of recreational, cultural, and natural areas,” according to the lawsuit.

Twenty-five million dollars of the bond was to be allocated “to acquire, protect, and restore wetlands projects that are a minimum of 400 acres in size in any county with a population greater than 5,000,000,” referring specifically to Ballona Wetlands.

“Ballona Wetlands is currently home to approximately 1,700 animal and plant species – some threatened and endangered, and the last remaining coastal wetlands in Los Angeles,” the petitioners noted.

“It will restore ecological function to currently degraded wetlands, preserving sensitive habitat for future generations and build climate resilience on a coast vulnerable to sea level rise,” the Department stated in a news release.

“The project also advances the Newsom Administration’s Executive Order of October 7, 2020, focused on harnessing California’s vast network of natural and working lands to fight climate change and protect biodiversity. See a summary of the approved project. A more detailed project description is found in the final EIR,” the Department said.

However, the petitioners say the current “misguided project” would instead “mostly benefit SoCalGas, operators of a dangerous gas storage field under the reserve.  Ballona's approximately 640 acres have been owned by the public since 2003 and are a treasured resource.”

"Our Governor's cabinet members just announced a series of initiatives that support 'Nature Based Solutions' to counter climate change. So, how does Governor Newsom justify a project to bulldoze and excavate more than 2.5 million cubic yards of soil, paving the way for a new fossil fuel infrastructure for the aging gas storage field under this ecological reserve?" asked attorney Bryan Pease.

The petitioners claim CDFW failed to respond adequately to comments made by numerous organizations and community members – especially related to climate change and to endangered and other imperiled species at Ballona.

"It's outrageous CDFW did not address the fact that hundreds of acres, filled with plants, animals and soils, would be destroyed, even though they store  and sequester carbon now. Protecting carbon in place is crucial,” said Molly Basler, a Climate Reality Leader, trained by Al Gore, and a candidate for LA City Council.

“Yet, their plan would obliterate a mosaic of habitats so that a salt marsh might sequester carbon in 100 years?  We don't have 100 years!" she exclaimed.

Wildlife biologist Robert van de Hoek, who has done field observations at Ballona for 30 years, notes concerns raised by the U.S. Fish & Wildlife Service that are outlined in the lawsuit.

"The State cannot legally dismiss the many documented sightings of endangered species and species on the California List of Species of Special Concern. The law says they must address those species, and, in many cases, they did not.  The 'Nature Based Solution' at Ballona is to protect the landscape, not to experiment with it," explained van de Hoek.

The petition also notes that in a related case Defend Ballona Wetlands v. California State Coastal Conservancy, Case No. 20STCV29911, “Petitioners are separately challenging the actions of the California Coastal Conservancy and its Executive Director, Sam Schuchat, in having misspent more than $12,000,000 of this bond money researching ways to destroy the wetlands, so that Schuchat’s allies at SoCalGas/Sempra can upgrade their storage facility for natural gas under the wetlands, under the guise of ‘restoration.’”

Schuchtat has a documented history of investing in the fossil fuel industry as seen at https://www.laweekly.com/why-does-a-coastal-conservancy-exec- own-piles-of-offshore-oil-stock/.

The lawsuit takes place at a critical time for endangered species and imperiled ecosystems like those found in the Ballona Wetlands, the Sacramento-San Joaquin River Delta and elsewhere in California.

At the same time that the CDFW is promoting the “bulldozer restoration” of the Ballona Wetlands, the same agency and the Department of Water Resources are fast-tracking the Delta Tunnel, the most environmentally destructive public works project in California history. The construction of the Delta Tunnel will hasten the extinction of Delta smelt, longfin smelt, winter-run and spring-run Chinook salmon, Central Valley steelhead and other fish species.

For the third year in a row, the California Department of Fish and Wildlife found zero Delta Smelt (Hypomesus transpacificus) in its 2020 Fall Midwater Trawl Survey throughout the Delta. Not only did the survey catch zero Delta Smelt, but it also found zero Sacramento Splittail, a native minnow that was removed from the Endangered Species list by the Bush administration.

“All signs point to the Delta smelt as disappearing from the wild this year, or, perhaps, 2022,” according to a California Water Blog post by Peter Moyle, Karrigan Börk, John Durand, T-C Hung and Andrew L. Rypel. “In case you had forgotten, the Delta smelt is an attractive, translucent little fish that eats plankton, has a one-year life cycle, and smells like cucumbers.”

The dramatic decline of Delta smelt and other species, when viewed over the period of 53 years since 1967 when the State Water Project went into operation, is simply chilling.

The Mission of the CDFW is to “manage California's diverse fish, wildlife, and plant resources, and the habitats upon which they depend, for their ecological values and for their use and enjoyment by the public.”

Unfortunately, whether it’s the “restoration” project in the Ballona Wetlands or the Delta Tunnel project and the likely extinction in the wild of the Delta Smelt this year, the California Department of Fish and Wildlife and other state agencies have a lot to answer for. The CDFW under the “leadership” of Director Chuck Bonham appears to be completely violating its mission regarding in its management of both the Ballona Wetlands and the Delta, the largest estuary on the West Coast of the Americas.