Add an Event
Newswire
Calendar
Features
Home
Donate
From the Open-Publishing Calendar
From the Open-Publishing Newswire
Indybay Feature
Related Categories: East Bay | Environment & Forest Defense | Global Justice & Anti-Capitalism | Health, Housing & Public Services
RCD joins gang of Regents to steal People’s Park from the People
by Lynda Carson (newzland2 [at] gmail.com)
Tuesday Feb 2nd, 2021 10:54 PM
A line of people at People's Park being fed some nourishing food by Food Not Bombs before the University had a fence installed around the park to keep people out, that was torn down by the supporters of People's Park last Friday! 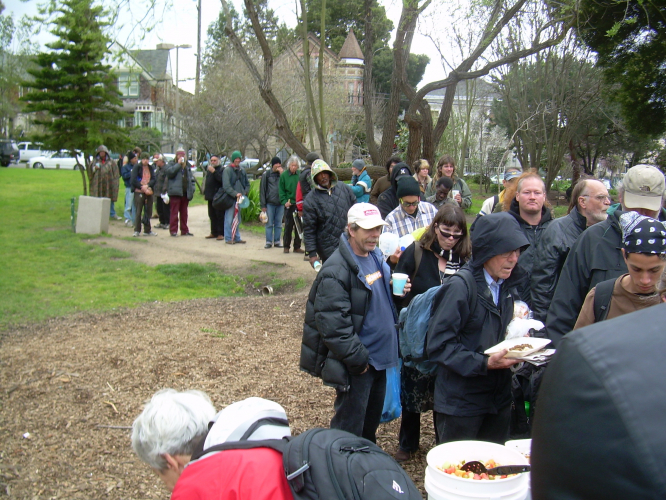 Some people believe that the poverty pimps masquerading as non-profit housing developers at times, are actually inflicting cruel and unusual punishment on the poor, needy, and the unhoused at times, especially when they get involved in projects that the community is in opposition to.

Last Friday, the supporters of People’s Park tore down the fence that was erected around the park, that allegedly was installed to allow a company to take soil samples from the ground, before some student dormitories are to be built on the historic 3 acres of land that people have died over, during the 1960s.

The despicable actions of placing a fence around People’s Park was in violation of the CDC’s covid-19 pandemic guidelines that urge cities and entities to avoid displacing the unhoused and homeless from their camping sites and encampments, as a way to stop the further spread of the covid 19 pandemic that has been killing hundreds of thousands of people across the nation. The unhoused and homeless persons at People’s Park were forced to move from one side of the park to another, once the offending fence was installed, according to Lydia Gans, a local activist with East Bay Food Not Bombs.

Local activist, Lydia Gans, will turn 90 years old on February 11, 2021, resides only 2 blocks away from Telegraph Avenue, and loves walking along the avenue talking to people, and participating with the people hanging out on the streets, and People’s Park.

According to records, Resources for Community Development (RCD) is involved in the process to steal People’s Park from the people. RCD is planning to build some housing at the historic 3 acres of land that the community wants to remain as an open space for the community, and a safe space for Food Not Bombs to continue feeding the poor, the homeless, and unhoused persons who reside at, and frequent the park since the 1960s.

Additionally, in part the records state, “The affordable and supportive housing component of the project would be developed and delivered by a third-party non-profit housing developer under a ground lease with the University. The campus selected a local Berkeley-based developer, Resources for Community Development (RCD), through a competitive process. The campus will coordinate the real estate transaction and integrate it with the other components of the project.”

The Street Spirit newspaper sold by the homeless and unhoused at People’s Park and along Telegraph Avenue is published by Youth Spirit Artworks, a non-profit organization. According to their website, “Youth Spirit Artworks (YSA) is an interfaith “green” art jobs and job training program located in Berkeley, California which is committed to empowering homeless and low-income San Francisco Bay Area young people.”

The publisher of Street Spirit, Youth Spirit Artworks which was founded in 2007 by Sally Hindman, who just happens to be married to Dan Sawislak, the Executive Director of RCD, the same so-called non-profit housing developer involved in the project that will displace the homeless and unhoused from People’s Park.

With the recent protest at People’s Park that made national headlines when the people tore the offending fence down that surrounded People’s Park, one can only wonder what kind of breakfast conversations are taking place between Sally Hindman and her husband Dan Sawislak, in regards to the protesters tearing down the fence around People’s Park lately.

Yes indeed, it’s ironic that it appears that the homeless, Street Spirit and Sally Hindman are on opposite sides of the issue of the future of People’s Park, in contrast to Dan Sawislak and RCD being involved in a project that is designed to displace the homeless, and unhoused from People’s Park.

One can only hope that Sally Hindman and Street Spirit will speak up in support of People’s Park and the unhoused, and convince Dan Sawislak and RCD to back off of their involvement in trying to take People’s Park away from the people.