Add an Event
Newswire
Calendar
Features
Home
Donate
From the Open-Publishing Calendar
From the Open-Publishing Newswire
Indybay Feature
Related Categories: San Francisco | Education & Student Activism | Labor & Workers | Racial Justice
Survival Of SF Community College Threatened - Sign Petition Vote of No Confidence in Execs
by HEAT
Friday Jan 22nd, 2021 6:14 PM
A resolution is being circulated for a motion of no confidence of the executives of SF Community College which is threatened with complete destruction with mass layoffs and campus closures 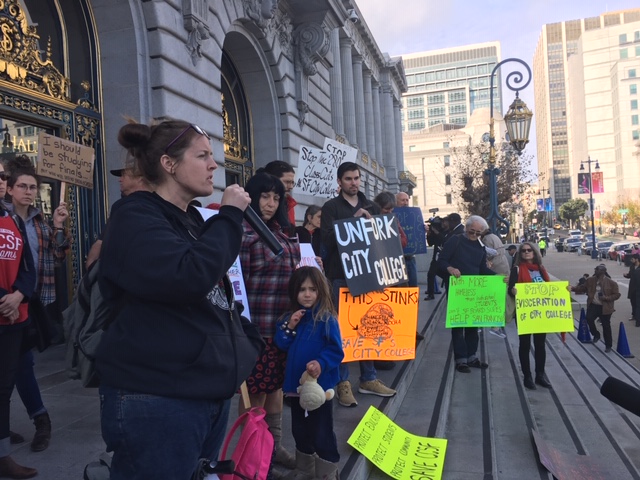 Whereas, the purpose of the faculty union, AFT 2121, is to represent and advocate for instructors and, by extension, for students; and

WHEREAS, the administration’s management and actions, with the approval of the Board of Trustees, have eliminated hundreds of classes and faculty jobs causing demoralization and great harm to students and faculty; and

WHEREAS, the administration planned to eliminate some 250 part-time jobs and cut some 800 classes for the 2020-21 school year in January 2020, before the pandemic, at a time when they expected an increase in revenue;[1] and

WHEREAS, the administration’s plan for 2021-22 is to eliminate 600 more classes, which undermines the 2018-2025 Institutional Goals adopted by the Board of Trustees on September 24, 2020 to “Improve the student experience” and to “strengthen credit and noncredit programs”; and

WHEREAS, the cuts harm and reduce educational opportunities for CCSF students, who are predominantly people of color, reinforce institutional and structural racism by perpetuating the continuation of social institutions that keep most people of color in subordinate positions within our society, and undermine equity efforts; and

WHEREAS, the administration has decided not to produce a printed class schedule to be mailed to potential students; and

WHEREAS, the administration, in not placing on the college’s website a link listing classes as is done in a printed class schedule, one that is easy to navigate, has reduced the likelihood of students becoming aware of all of the classes the college offers into which they might want to enroll;[3] and

WHEREAS, for years, the administration has failed to resolve complaints about the online registration system that discourages students from enrolling in classes; and

WHEREAS, the aforementioned cuts and registration problems have resulted in classes being under-enrolled, which in turn is used to justify more class cuts, further putting out of reach the Board’s 2019-20 goal adopted on December 12, 2019 to achieve 32,000 Full Time Equivalent Students (FTES)[4] that is key to the college’s funding, and the repair of CCSF from the harm that has been done since the accreditation crisis; and

WHEREAS, the Board of Trustees unanimously approved the administration’s recommendation to close the Fort Mason facility, supposedly to save money, even though this action may result in a greater deficit due to the loss of state funding and students, and the payment of tens of thousands of dollars to move out of the facility; and

WHEREAS, the administration abruptly closed the Civic Center campus days before the start of the Spring 2015 term and has failed to perform any of the upgrades it claimed justified the closure, and now plans to end the lease of the temporary replacement for the Civic Center Campus and incur costs for moving out; and

WHEREAS, the administration has failed to find an alternative facility for the airport program, and intends to move it into the Evans campus, which, due to a lack of room, will likely lead to the displacement of other programs; and

WHEREAS, this relocation is unacceptable since it would likely cause the discharge of poisons, adding to the environmental damage already inflicted on the community where the Evans campus is located; and

WHEREAS, the administration, has once again cancelled/postponed the promise of a Performing Arts Education Center (PAEC) despite recently winning the approval from the voters of an $845 million bond measure, which includes funding for putting up such a building, and the voter approval of previous bond measures for this same purpose in 2001 and 2005;[6] and

WHEREAS, the crown jewel of CCSF, the Diego Rivera Mural, is to be loaned to the SF Museum of Modern Art, then returned and moved into the PAEC upon its completion no later than September, 2023, raising the question of what will become of this mural if the promised building is not completed in a timely manner; and

WHEREAS, the administration has apparently pledged some $34 million of this $845 million bond money for an education building at 1550 Evans, a site owned by the SFPUC, which the College neither owns nor leases, which is contrary to how bond money is reportedly allowed to be spent; and

WHEREAS, the administration, with the unanimous approval of the Board of Trustees, has put forward a 5-year spending plan;[7] and

WHEREAS, under this plan, the salaries of faculty will be reduced by over 21% and will likely result in some tenured faculty losing their positions, and the remaining faculty receiving salary cuts while having to teach larger classes, thereby adding to their workload and reducing/restricting the personal attention students receive; and

WHEREAS, the faculty salary reduction will result in a decline of approximately $20,000/month in dues collected by AFT 2121 in addition to the current decline of about $10,000/month, further weakening AFT 2121’s ability to represent faculty and to advocate for students; and

WHEREAS, under this 5-year spending plan, the reduction in administration salaries will be comparatively less at 14%; and

WHEREAS, cuts in administration may well be filled by consultants, undermining any savings achieved from reducing the costs of administrators; and

WHEREAS, the plan at the end of the 5 years is to have a surplus of more than $4.7 million over reserve requirements—money that could be used to increase educational opportunities; and

WHEREAS, the administration, in addition to the Board of Trustees, continually fails to adhere to open government, democracy, and transparency in what could be violations of the Brown Act; and

WHEREAS, responsibility for many of the above-mentioned actions and problems rests with Chancellor Vurdien, Deputy Chancellor Gonzales, and Vice Chancellor Boegel; now, therefore be it

RESOLVED, by voting for this resolution, we are expressing no confidence in Chancellor Vurdien, Deputy Chancellor Gonzales, and Vice Chancellor Boegel, and we will inform the college community and the general public of this decision.

[1] Interim chancellor Dianna Gonzales, now Deputy Chancellor, described the cuts in her message dated May 15 “Unfortunately, we have had to remove teaching assignments for nearly 250 part-time faculty for the Fall 2020 Semester…” https://www.ccsf.edu/news/chancellors-weekly-message-may-15

A week later, in her May 22, 2020 message to the college community, she wrote, “Initial work on the 2020-21 academic year schedule was based on a budget of 1200 FTEF [Full-time equivalent faculty,] leading to a reduction of approximately 800 classes…”
https://www.ccsf.edu/news/chancellors-weekly-message-may-22

Gonzales made clear in the board meeting on July 30, 2020 that the cuts had been planned in January, before the pandemic, despite the anticipation of a COLA and additional funding for growth in the budget.

From the video of the July 30, 2020 board meeting, starting at 6:39, Gonzales shows that in January, the budget plan was to make these cuts, described at 6:41:50 as “a considerable reduction [in classes] from the previous year” despite an expected budget for the next year in January that included a cost of living increase and growth. Video: https://ccsf.granicus.com/MediaPlayer.php?view_id=2...

[3] As an example, see what San Mateo provides on its website. https://webschedule.smccd.edu/schedule/csm_open_202103.pdf

[6] What was to be the PAEC or performing arts center is now being referred to as the Theatre (DRT) and a STEAM building, sometimes also referred to as DRT/PAEC.

Language of 2001 Prop A Bond measure is to “Plan for construction of a new community cultural and performing arts center.” Page 18 https://webbie1.sfpl.org/.../elections/November6_2001.pdf

Language of Prop A passed March 2020

“In addition to the projects listed above, repair, renovation and construction projects may include, but not be limited to…build new or renovate existing facilities such as a Science, Technology, Engineering Art and Math (STEAM) building, space for the permanent display of Diego Rivera’s Pan American Unity Mural, outdoor classrooms/performance space, fine and theater arts and visual arts and performing arts facilities…” found at page 3 . https://sfelections.sfgov.org/.../cand.../March2020_LT_A.pdf

Troubling is the use of the word may

However, arguments in favor of Prop A signed by all Trustees except Ivy Lee leave out the word may.

“Proposition A would allow City College to issue bonds to fund much needed construction including:…Rebuild the childcare and student success center and build a STEAM (science, technology, arts and math) building at the Ocean Campus to better prepare students.”
See page 34: https://sfelections.sfgov.org/.../Voting/2020/M20_VIP_EN.pdf

[7] See pages 28 and 29 https://go.boarddocs.com/.../Multi-Year%20Budget%20and... Under the five year plan, staff salaries would be reduced from $50.75 million to $43.3M which is over 14%. That would obviously require the college to function with a smaller staff who would be expected to put in more work, or have some of their work done by private contractors.
Add Your Comments
Support Independent Media
We are 100% volunteer and depend on your participation to sustain our efforts!