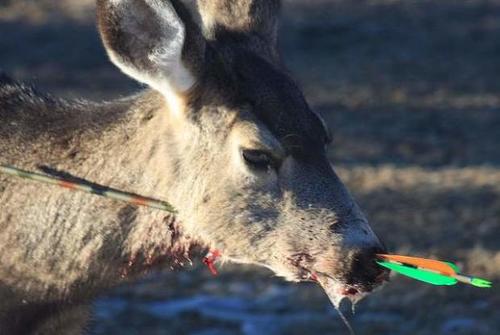 DANGERS TO THE HUNTER
1. Hunters trip on their guns going over fences, shooting themselves or others. They sometimes discharge a rifle in twisting an ankle in a gopher hole or over roots. They can fall into unguarded ravines or capsize in a boat. Small planes with hunting party passengers in remote regions of the West crash.
2. There are many instances of bow and arrow hunters shooting others accidentally or impaling themselves on their own arrows.
3.. Guns can misfire. Hunters sometimes look down the barrel of a rifle wondering why it didn't fire, only to have the gun discharge.
4. The use of animal urines to attract animals to their deaths can boomerang.
5. Injured animals (stags, boar, bears etc) can turn around and attack. There are many videos on the internet of injured or enraged animals attacking hunters.
6. Hunters often have heart attacks in the woods as they try to pull or carry or lift very heavy dead animals.
7 Hunters are frequently injured in tree stands. Injuries include falling asleep and then falling out of the stands.
8 Hunters lost in the woods suffer from heat or freezing, hunger and thirst.
9. Ticks on deer and other animals or in the grass can burrow into hunters. Lyme disease is caused by
by bacteria on the ticks. Mosquitoes bite.
10 Foxhunters mounted on horses are often thrown to their deaths or injured.
11 Hunters are not immune from the impotence which is related to animal flesh consumption. Michael Klaper MD has lectured around the country on vegan diet as a cure for impotence.
12. Eating flesh from huntered animals shortens life expectancy by causing heart attacks, strokes, aneurisms, embolisms, many kinds of cancers, kiAndney disease, thousands of varietues of food poisoning.
13. Animals have a number of untreated diseases, some of which are transmitted to those who eat the venison etc. Mad Deer, Mad Elk, and a number of other spongiform encephalopathy diseases make eating the cadavers of animals hunters kill even more dangerous. Figures on cervine spongiform encephalopathy have been censored by state and federal agencies
intent on protecting hunting industries, tourism, restaurants, gun merchants, outdoor equipment sales etc.

DANGERS TO CHILDREN
14. Countless children have died, finding their hunter parent's gun stash and using the weapons to play, for instance, cops and robbers.
15. Hunters have accidentally shot children in nearby homes.

DANGERS TO THE PUBLIC
16. Hunters often mistake hikers, campers in the woods for animals they are stalking. Countless residents of nearby
communities have been killed when hunters discharged weapons in woods close to the homes.

DANGERS TO THE ANIMALS
17. Animals running in terror from hunters leave their bodies in fright and agony. Besides the painful death to trillions of animals are the countless animals who have died slowly from hunter injuries or the animals who are maimed but continue to live in pain with arrows protruding or infected gunshot wounds. Cleveland Amory reported seeing a deer with 12 arrows in her, still walking around. Billions of bear cubs, doe, etc. have been orphaned by hunters. President Theodoroe Roosevelt is remembered more for the 1 orphaned cub he adopted than the hundreds of bears he killed.
18. Fish die of suffocation, smashing or being knifed. Their eyes, gills, throats are ripped out by multipronged hooks.
19. Dogs are injured by wild boars, in fox hunts. by ticks. Beagles are kept confined in small cages by many hunters.
20. Horses are injured by broken necks and legs in fox hunts.
21. Falcons are injured in a variety of ways by hunters who use them to catch birds and small animals.

22.. Radiation cancers from Fukushima and illegal nuclear waste dumping around the world by other nuclear facilities, stomach cancer, lethal food poisonings including anaphylacic shock from shellfish, choking, mercury and other heavy metals destroying memory and hastening Alzheimer's, Mad Fish disease from prions expelled into the water etc are some hazards of fish eating.
23 Fishermen often catch fishhooks in face, fingers etc.
24 They can be spiked in femoral, hand or other arteries by catfishes, bitten by sharks.
25.They can be drowned in storms, knocked out of boats by the ramming of sharks, whales
26 Deep sea fishing is listed by many organizations as one of the 5 most dangerous occupations in the world. Drowning,
being caught in the nets are other hazards.

MURDER
27. Murders have been disguised as hunting accidents
28. Hunters can encounter farmers who don't want them shooting in the woods. Thomas Dillon killed five hunters in Central Ohio
29. A gathering of inebriated hunters can spell tragedy from shooting as alcohol opens the floodgates of anger.
30. The act of killing mammals and birds reduces the barrier between nonhuman and human beings. Criminal profilers and others have reported that those who have abused animals are more likely to become serial killers of human beings.

Millennials have caused the percentage of hunters in population to drop below 5%. The cult of masculinity, that one must kill animals in order to prove manliness, has fewer adherents every year.

A New Hampshire man transporting a bear he'd murdered was injured in his vehicle rollover
http://www.wmur.com/news/hunter-transporting-bear-injured-in-atv-rollover/35157188

Milton California a group of deer hunters have confrontation with man who doesn't want them hunting the man is shot
http://www.pnj.com/story/news/crime/2015/07/19/one-injured-milton-hunting-confrontation/30387885/

hunters in Swiss and US emergency rooms
http://www.ncbi.nlm.nih.gov/pmc/articles/PMC4365337/

pirate4x4.com
Add Your Comments
Support Independent Media
We are 100% volunteer and depend on your participation to sustain our efforts!