Add an Event
Newswire
Calendar
Features
Home
Donate
From the Open-Publishing Calendar
From the Open-Publishing Newswire
Indybay Feature
Related Categories: San Francisco | Labor & Workers
SF Bay View Editor Has Cell Phone Seized & Google Fires Black Scientist Dr. Timnit Gebru
by WorkWeek
Wednesday Jan 20th, 2021 10:57 PM
WorkWeek covers the effort to stop SF Bay View Editor Malik Washington from doing his work. The for profit halfway house run by the Geo Group ordered that his cell phone be seized to stop him from doing his work after the facility in the Terderloin was exposed for having a Covid outbreak. We interview his lawyer Richard Tan.
Also WorkWeek looks at the firing of Google top AI scientist Dr. Timnit Gebru. WorkWeek looks at the reason she was fired. 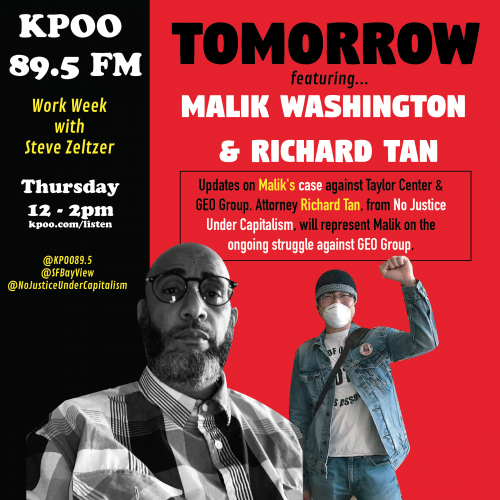 WorkWeek looks at the actions of a SF halfway house in the Tenderloin run by a for profit company Geo Group to take away the cell phone of the SF Bayview Editor Malik Washington.

We interview his lawyer Richard Tan about these actions, the Covid pandemic on prisoners and what this means for workers, prisoners and journalists.

Next WorkWeek interviews Ali Alkhatib about the firing of Black Google AI scientist Dr. Timnit Gebru. is a Research Fellow at the University of San Francisco’s Center for Applied Data Ethics.

He has been looking at the effect of techology on workers and the public and he spoke to WorkWeek about the firing of Black Google AI engineer Timing Gebru. She is one of the most important scientists in the country looking at AI, Algorrythyms and how it effects Black women.

She is an outspoken critic of unethical AI and she was fired for her positions.

Google hired Timnit Gebru to be an outspoken critic of unethical AI. Then she was fired for it.
https://www.washingtonpost.com/.../google-timnit-gebru.../
https://googlewalkout.medium.com/standing-with-dr-timnit-gebru-isupporttimnit-believeblackwomen-6dadc300d382

WW 12-31-20 Racist SF Health Service System & Colin Kapernick On Mumia
https://soundcloud.com/workweek-radio/ww-12-31-20-racist-sf-health-service-system-colin-kapernicck-on-mumia
WorkWeek looks at the history of racist attacks on Black employees at the San Francisco City Health Service System
and the Department of Public Health.
Joining the discussion was SF Bayview Editor Malik Washington, former Health Service System worker Malika Alim and
SEIU 1021 chief steward and nurse W.D. Flient.
WorkWeeek hears the London African Gospel Choir who recently performed a song outside a UK prison for Wikileaks
founder and union journalist Julian Assange. A British court is set to rule on January 4 on whether Assange should be
extradited to the U.S. to face criminal prosecution and, if convicted, up to 175 years in prison for the publication of
secret documents through the whistleblower platform WikiLeaks in 2010.