Add an Event
Newswire
Calendar
Features
Home
Donate
From the Open-Publishing Calendar
From the Open-Publishing Newswire
Indybay Feature
Related Categories: International | Immigrant Rights
All Workers Must Support Honduran migrants and refugees
by Repost of WSWS article by Andrea Lobo
Tuesday Jan 19th, 2021 10:52 AM
Two months after hurricanes Eta and Iota devastated the region and as the pandemic crisis continues, caravan members are escaping conditions of absolute destitution. Capitalist governments line up to thwart workers' pursuit of life, liberty, and happiness. 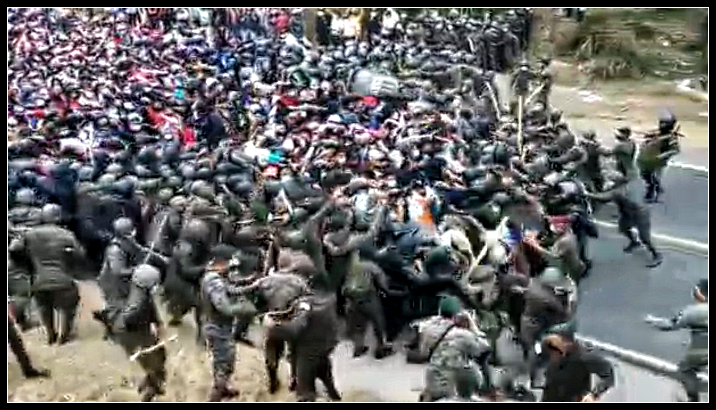 By Andrea Lobo at the World Socialist Web Site

With wooden batons, punches, kicks, stun grenades and tear gas canisters, the Guatemalan military Sunday attacked a caravan of thousands of migrants and refugees that departed Honduras over the weekend, many traveling as families.

Videos clearly show the bravery and desperation of the workers and youth lurching into the wall of soldiers as they are brutally beaten. Menacingly, soldiers stood in the background with firearms. Emergency workers reported that dozens were injured, including children, and some had to be transported to the hospital.

Two months after hurricanes Eta and Iota devastated the region and as the pandemic crisis continues, caravan members explained to the media that they are escaping conditions of absolute destitution.

These conditions are accompanied by generalized gang violence, state repression and gross negligence toward the humanitarian catastrophe and COVID-19 pandemic on the part of the US puppet regime of Juan Orlando Hernández in Honduras.

During the repression in Guatemala, another plantation worker, Dixón Vázquez, told AFP that the plantation where he worked in Lima was destroyed. “They have no heart,” he said. “We are risking our lives. There are no jobs in Honduras, especially after the two cyclones and the pandemic… Our goal is to reach the United States.”

In its latest estimates, UNICEF reported that hurricanes Eta and Iota affected 9.3 million people in total, including 4.66 million in Honduras, and left 294 people dead or missing, 110 of them in Honduras. Thousands of hectares of crops and hundreds of roads and bridges were wiped out.

After surviving weeks of almost continuous flooding, landslides and hurricane winds—amid a pandemic that has overwhelmed the already collapsed health care system—millions found themselves stripped of their homes, workplaces, schools, roads, water, electricity and other elements of their basic livelihood.

In December, in an earlier attempt, some 500 Hondurans were harassed, threatened and sent back by the Honduran police before reaching the Guatemalan border.

The latest caravan departed the northern city of San Pedro Sula on January 14 and January 15 and entered Guatemala through the Florido border crossing in three large groups. A smaller group of about 150 people sought to cross on January 14 in the eastern crossing of Corinto but was detained and returned immediately.

On Saturday night, the bulk of the caravan re-grouped at Vado Hondo, Chiquimula, where the barrier of hundreds of troops and police violently stopped them.

The Guatemalan immigration authorities reported on Sunday that more than 9,000 people entered the country with the caravan, while 1,383 had already been deported to Honduras. The group at Vado Hondo is composed of about 6,000 migrants and refugees and, as of this writing, remains trapped there.

According to the Guatemalan National Police on Monday, it has rounded up several small groups of Hondurans that reached the northern department of Petén near the Mexican border.

Under orders from the Trump White House, which for months has been the nerve center of an operation to establish a fascistic dictatorship that included the January 6 storming of the US Capitol, the regional governments are using troops and anti-riot police to violate the right to asylum protected by international law of thousands of Hondurans escaping a humanitarian catastrophe.

Authorities in Washington, Mexico and Guatemala have claimed that they are seeking to enforce COVID-19 protocols by preventing the caravan from crossing. Meanwhile, the three governments have reopened nonessential economic activities and adopted a deliberate “herd immunity” policy of mass contagion in order to safeguard the profits of the major banks and corporations.

Guatemala’s right-wing President Alejandro Giammattei declared a state of emergency in the departments along the migrant route from Chiquimula up to Petén on the border with Mexico. He has insisted that foreigners must have a passport and a negative COVID-19 test.

The administration of Mexican President Andrés Manuel López Obrador has in turn deployed hundreds of National Guard soldiers with riot gear to the town of Tapachula on the border with Guatemala. López Obrador had also threatened the refugees and migrants with prison sentences of up to ten years for violating COVID-19 regulations.

In his only public appearance since the January 6 coup attempt, Donald Trump spoke on January 12 at the US-Mexico border to agitate his fascist supporters planning further attacks, including by scapegoating migrants.

By faithfully obeying the orders to attack the caravans, the regional authorities are directly aiding Trump’s coup attempt. In fact, Trump directly thanked his “friend” López Obrador for having deployed “27,000 Mexican soldiers guarding our borders over the last two years.”

“Change the name from the caravans to the gravy train,” Trump added, “because that’s what they’re looking for. This will be an unmitigated calamity for national security, public safety, and public health. It would destroy millions and millions of jobs and claim thousands of innocent lives.”

To blame migrant workers for the calamity in the United States is absurd! The Trump administration, with the collaboration of both corporate-controlled parties, has showered the major banks and corporations with trillions of dollars of “gravy”—what the financial press itself has called “free money”—while rejecting every major effort to halt the spread of the pandemic.

Meanwhile, migrant workers in the United States have taken on an overwhelming share of the burden of providing essential services during the pandemic while suffering disproportionately from COVID-19 infections and deaths.

On the other hand, whatever hopes the Central American refugees had that the Joe Biden administration would help provide desperately needed asylum and relief were immediately opposed by the Biden team. On Sunday, a transition official stated to NBC News that “they’re not going to be able to come into the United States immediately.” Changes “will take time,” he said, and “those in the region should not believe anyone peddling the lie that our border will be open to everyone next month.”

President-elect Biden himself said in an interview on December 22 that “the last thing we want is to stop immediately the access to asylum the way it’s being run now and end up with too many people on our border.”

The response of Biden and the Democratic Party to the January 6 coup constitutes another and even more serious warning. They have worked to cover up the involvement in the coup of Trump’s co-conspirators in the Republican Party and sought to legitimize the integration of the fascistic right and their policy demands into the framework of mainstream politics. A similar process has occurred with the neo-fascist Alternative for Germany, the Vox Party in Spain and similar forces across Europe.

The caravan of Honduran migrants and refugees must be supported by all workers. Across the world, the offensive against the rights of refugees and migrant workers by the ruling class is being used to spearhead a broader assault against the democratic and social rights of the entire working class.

https://www.wsws.org/en/articles/2021/01/1...
Add Your Comments
LATEST COMMENTS ABOUT THIS ARTICLE
Listed below are the latest comments about this post.
These comments are submitted anonymously by website visitors.