Add an Event
Newswire
Calendar
Features
Home
Donate
From the Open-Publishing Calendar
From the Open-Publishing Newswire
Indybay Feature
Related Categories: San Francisco | Government & Elections
How Did Gore Receive At Least 114,000 More Votes Than Bush In Florida In 2000
by One Person One Vote
Wednesday Jan 13th, 2021 2:17 AM
Jeb Bush's voter roll purging, the criminal deceit of the Florida Times Union, police intimidation, barring of precincts etc robbed the American people of our choice in 2000. The disastrous results remain with us at this time. 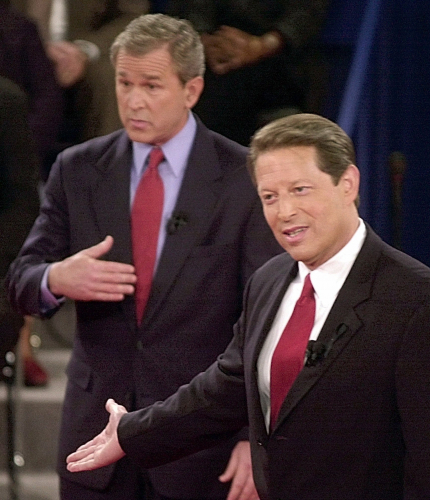 1 Jeb Bush and Katherine Harris purged 94,000 (many black males) from the voting rolls, under the deceitful claim that they were felons.

2 A talk show host on a rightwing Clear Channel station said he was in Florida during that election and saw police intimidate people at voting precincts or bar voting at the precincts altogether.

3. The NAACP received a number of calls from voters who'd been told that the NAACP had endorsed Bush.

4. The Florida Times Union printed a deceiving sample ballot for black areas of Duval County in which is the city of Jacksonville. Voters were instructed to vote for at least 2 of the 10 presidential candidates on the ballot. 20,000! ballots of 27,000 were thrown out.

5. The Florida election law mandated a recount. It was unconstitutional for the Republican dominated Supreme Court to interfere. Antonin Scalia whose son was a lawyer for Bush's attorney and Clarence Thomas whose wife was an employee of the rightwing Heritage Foundation refused to recuse themselves.

6. Roger Stone, Brett Kavanaugh (now on the Supreme Court) and others organized the Brooks Brothers riot, shouting stop the vote and other cries outside of the Florida recount office. Others in DC shouted outside Gore's VP government residence demanding that he leave. Meanwhile John Roberts, now SCOTUS chief justice, was a lawyer working for Bush.

7. Adding together the 94,000 illegally purged, the 20,000 whose ballots were thrown out because of the deliberate deception of the Florida Times Union, and the numbers of people discouraged from voting or barred from voting by the police and highway patrol, there were at the very least 114,000 votes by which Gore won. Even this year, there is a repressive new voter registration law designed to reduce Democrat numbers in Florida. Even so, Democrats have almost 1/2 million more registrants than Republicans.

8.These Republicans on the Supreme Court are unelected and have a life term!! (as of now). There was a 327 to 527 vote separation when the recount was stopped. This handful smashed the wishes of 30 million people. Bush got 2,912,790. Without Jeb Bush's felonious crimes for his brother, (94,000 voters purged) and of the Florida Times Union (20,000 ballots tossed out because of the paper's deliberate misinformation) Gore's vote should have been at least 3,014,000. It is a greater number if one counts all the people turned away by police intimidation and barred precinct voting sites.

9. Bush was allowed by corrupt law to keep the stolen fruit. It was not the purged African Americans but the architects of the criminal election theft who were felonious. Because of their election crimes, Bush invaded Iraq and Afghanistan, the war which has already lasted 20 years in March of 2021. These wars have killed millions and injured millions more, have damaged for a century the environment, and have cost many trillions. There were 1000 other disastrous results, including no action on climate change, a climate of execution, rightwing appointments to the Supreme Court, etc..
*********
Crimes of the Florida election
https://www.wsws.org/en/articles/2000/12/flor-d13.html
The Bush-Gore Florida Recount: An Oral History - The Atlantic
https://www.theatlantic.com/politics/archive/2020/08/bush-gore-florida-recount-oral...How the 2000 Election in Florida Led to a New Wave of ...
https://www.thenation.com/article/archive/how-the-2000-election-in-florida-
The last 5 Republican presidents have used fraud and treason
https://www.alternet.org/2017/07/gop-fraud-and-treason/
Election fraud expert
http://gregpalast.com
Image source. Boston Globe
https://www.wsws.org/en/articles/2000/12/f...
Add Your Comments
Support Independent Media
We are 100% volunteer and depend on your participation to sustain our efforts!