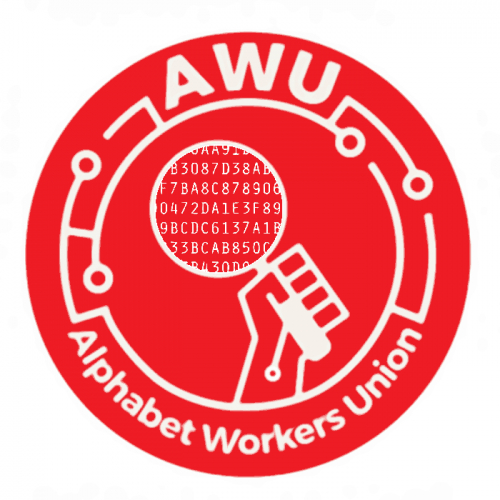 A group of 226 Google engineers announced the creation of the Alphabet Workers Union (AWU) on January 4, calling it “the first of its kind in history.” The AWU is open to all 260,000 full-time employees and contractors at Alphabet, the monopoly that owns Google, YouTube, Android and numerous other Silicon Valley big tech products.

In a press release published on the just-launched AWU website, the organizers explain that the union was formed “with support from the Communications Workers of America (CWA),” the largest communications labor organization in the US with 700,000 members and affiliated with the AFL-CIO.

AWU Program Manager Nicki Anselmo states that the new union “builds upon years of courageous organizing by Google workers.” Anselmo then refers to a number of policy conflicts between Google staff and company management that have taken place over the past decade, including opposition to the Google+ “real names” policy, a campaign to stop participation in the Pentagon’s artificial intelligence warfare Project Maven, and multi-million-dollar payouts to executives accused of sexual harassment.

Other policy issues at Google that employees have been fighting for are for salary transparency, opposition to censorship, for fair treatment of contractors, and opposition to providing technology to the US Department of Homeland Security to attack immigrants and to police departments involved in racial bias.

In her statement, Anselmo indicates the difference between the AWU and other labor unions, when she says, “Our new union provides a sustainable structure to ensure that our shared values as Alphabet employees are respected even after the headlines fade.” Although it is not fully explained in the press release, the CWA-sponsored AWU is being called a “minority union,” representing a small number of employees.

According to a report in the New York Times, this means that the organization is “primarily an effort to give structure and longevity to activism at Google, rather than to negotiate for a contract.” In an Op-Ed in the Times, Executive Chair Parul Koul and Vice Chair Chewy Shaw of the AWU explain that the formation of the AWU is “the first step in winning a recognized bargaining unit under U.S. law.”

The drive by software engineers and professional employees at Google to organize is part of a growing conflict between tech workers and the trillion-dollar Silicon Valley corporations that has been intensifying in recent years. The conflict at Google reached a crescendo in 2019 when the company began intimidating, disciplining and firing workers for speaking out against management policies and workplace practices.

At that time, it was revealed that Google had employed the unionbusting firm IRI Consultants to help suppress discussion among employees and victimize the most vocal and activist workers. After four employees were fired in November 2019, the CWA became involved in filing charges against Alphabet with the National Labor Relations Board for violations of US labor law.

However, Google workers will find no means to express their interests through the CWA and AFL-CIO. As we have explained previously, the participation of the CWA and the intervention of the NLRB in the fight of Google employees against Alphabet must be taken as a serious warning. The AFL-CIO and CWA are not workers’ organizations, but extensions of the corporations and the government that exist for the purpose of containing the struggles of the working class against the capitalist system and diverting it into safe political channels, such as support for the Democratic Party.

In fact, the CWA has betrayed every strike and struggle by its membership, going back decades, in favor of the interests of the telecommunications monopolies. In 2016, for example, 40,000 Verizon workers went on strike and were deliberately isolated by the CWA by keeping the union workers at the other telecoms on the job for more than seven weeks. In secret collaboration with the Obama administration and the NLRB, the union signed a deal with Verizon that offloaded hundreds of millions of dollars in health care costs onto the backs of the workers and opened the door to massive job cuts.

Since the mid-1970s, according to a recent report by the Economic Policy Institute, the telecom workforce was reduced by 20 percent—with the collaboration of the CWA—while total US employment grew by 75 percent. Meanwhile, during this same timeframe, the number of unionized telecom workers fell from nearly 60 percent in the 1970s to just over 16 percent in recent years.

The present CWA membership of 700,000 is the product of an organization that has specialized in mergers and acquisitions of collapsing unions. Between 1993 and 2012, nearly 450,000 members from former flight attendant, electrical, news media, broadcast, public safety, healthcare, printing and publishing, transportation and university workers unions have been rolled into the CWA. Most of these declining organizations were founded during the great struggles of the American working class to form industrial unions in the 1930s, but has lost hundreds of thousands of members due to countless betrayed struggles.

Having lost so many dues-paying members, the CWA formed the AWU as part of a broader campaign dubbed CODE (Campaign to Organize Digital Employees) to “organize” and collect dues from tech, game and digital workers. It follows the union organization drives among HCL contract employees at Google in Pittsburgh and cafeteria workers with UNITE HERE! in the San Francisco Bay area, as well as unions formed by tech employees at Kickstarter and Glitch.

While Google employees and other tech workers have shown a desire to address political questions beyond their own workplace, the role of the CWA in sponsoring the AWU is, in fact, to ensure that political discussion never passes beyond the limits of what is acceptable to the Democratic Party.

In an indication that the CWA-AWU falls safely within the confines of Democratic Party politics is the endorsement of the organization and the role of the NLRB by Jacobin magazine, the monthly publication affiliated with the Democratic Socialists of America (DSA). Very aware that tech workers do not trust the official US “labor movement,” Jacobin reporter Alex N. Press promotes the CWA and AFL-CIO among Alphabet employees, saying, “Every worker, even a software engineer, needs a union, and the existence of one at Google clarifies the antagonism that is foundational to any capitalist workplace.”

But the unions long ago abandoned any commitment even nominally to the class interests of workers. Instead over the last four decades, they have promoted corporatist “labor management” collaboration in the name of making US transnational corporations more “competitive.” This has not changed with the installation of various pseudo-left forces into the leadership of the unions, which by their very nature are tied to and uphold the foundations of every “capitalist workplace” and the political subordination of the working class to the corporate-controlled political establishment.

Google and Alphabet employees must form independent rank-and-file committees to uphold their right to speak and organize. The allies of tech workers are not with the pro-business NLRB or AFL-CIO union bureaucrats, but with telecom workers and every section of the working class in the US and internationally. The fight for the day-to-day interests of tech workers must be combined with a political struggle to transform the giant tech monopolies into public utilities, collectively owned and democratically controlled by the working class, as part of the socialist transformation of the US and world economy.

https://www.wsws.org/en/articles/2021/01/1...
Add Your Comments
Support Independent Media
We are 100% volunteer and depend on your participation to sustain our efforts!