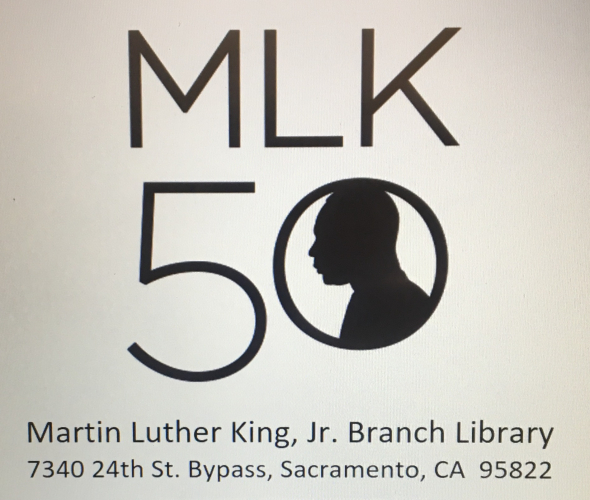 January 15, 1929 is a profound historical day in America, yet few have experienced the majestic power and spirit behind in the statue entitled, 'Beloved.'

April 4, the Confederate Army retreated from their Capitol of Richmond, VA Spring of 1865 effectively marking the beginning of the end of chattel slavery throughout America.

In Memphis, Tennessee on April 4, 1968 the assignation of Rev. Dr. Martin Luther King, Jr. effectively began the end of the US Civil Rights Movement.

Later in the evening on April 4, 1968, the Sacramento City Council voted to name the regional library, the MLK Memorial Library, dedicated to preserve his legacy and closed the evening sessions in his honor.

Globally, the civil cights icon Rev. Dr. Martin Luther Jr. is singularly remembered for his prophetic "I have been to the Mountiantop Message" yet that short sermon is nowhere close to the profound impact he continues have globally.

According to first hand witnesses and history books, Dr. King went out on the balcony the next evening.

He was standing near his room when a single bullet struck him at 6:01 p.m. in his face and severed his spinal cord.

Dr. King fell backward onto the balcony and was instantly unconscious. An ambulance rushed to St. Joseph’s Hospital, where doctors opened his chest, performed cardiopulmonary resuscitation, yet
Dr. King never regained consciousness and was pronounced died at 7:05 p.m.

His stated Dream had become a Nightmare that ended with a singular assigns bullet, near Downtown, in the ole Slavery Port City of Memphis, along the historic strategic Mississippi River.

Our Golden Anniversary of the MLK Memorial Library efforts serve as a beacon preparing our underserved Meadowview Library Service District for a Renaissance, already underway.

International, National, State and Regional resources are poised to assist the long overdue remodel of the library utilizing "best practices" of an essential international community resource.

January 15, 2021 we offer a new appreciation to consider making his values and beliefs a higher priority while supporting community efforts to honor the lifelong profound contributions by Rev. Dr. Martin Luther King, Jr.

Together, we must greatly enhance the libraries offerings of his journey in seamless partnership with the Sacramento Regional Public Library Authority and global stakeholders who "Behold" the legacy of a new born King from the blood stained soil in the State of Georgia, for a profound global purpose.