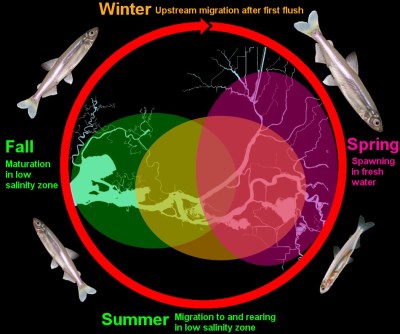 For the third year in a row, the California Department of Fish and Wildlife found zero Delta Smelt (Hypomesus transpacificus), once the most abundant fish species in the estuary, in its 2020 Fall Midwater Trawl Survey throughout the Delta.

Not only did the survey catch zero Delta Smelt , but it also found zero Sacramento Splittail, a native minnow that was removed from the Endangered Species list by the Bush administration.

The fish are surveyed every year with trawl gear in an an array of locations in the Delta. The survey uses an “index,” a relative measure of abundance, to assess the populations.

“Most native and introduced pelagic species indexed in 2020 had deceasing indices or a relative index value of zero,” said James White, Environmental Scientist for the Bay Delta Region, December 31, 2020, in a Department of Fish and Wildlife memo analyzing the 2020 survey results.  “Only Threadfin Shad had increasing relative index values compared to last year.”

The 2 to 3 inch long Delta Smelt, found only in the Sacramento-San Joaquin Delta, is an indicator species that reveals the overall health of the San Francisco Bay-Delta Estuary.

”Delta Smelt are the thread that ties the Delta together with the river system,” said Caleen Sisk, Chief of the Winnemem Wintu Tribe. “We all should understand how that effects all the water systems in the state. They are the irreplaceable thread that holds the Delta system together with Chinook salmon.”

While there are many factors contributing to the fish’s decline, including toxics, invasive species and increasing pollution, none is more central to the fish’s collapse that the giant state and federal water pumping facilities that have diverted water for over five decades to corporate agribusiness operations in the San Joaquin Valley and Southern California Water agencies.

The 2020 abundance index for Delta Smelt was zero and was tied with 2018 and 2019 for the lowest in the survey’s history, according to White.

“This is a continuation of a pattern of low indices, 7, 8, and 2, that occurred in years 2015, 2016, and 2017, respectively. No Delta Smelt were collected from any stations during our survey months of September- December 2020,” wrote White.

While the Fall Midwater Trawl (FMWT) survey did not catch any Delta Smelt, it does not mean there were no smelt present, but the numbers “are very low and below the effective detection threshold by most sampling methods,” said White.

This is not the only survey that found low numbers of Delta Smelt in 2020. The Enhanced Delta Smelt Monitoring (EDSM) survey of the U.S. Fish and Wildlife Service (USFWS) caught two Delta Smelt among 14 sample weeks (n=1727 tows) conducted between September 8- December 11, 2020 (data available at the USFWS Delta Juvenile Fish Monitoring Program website).

In addition, the Fish Culture and Conservation Laboratory run by UC Davis, which aims to capture wild broodstock every year to maintain their hatchery-reared Delta Smelt population as a hedge against extinction in the wild, couldn’t find any fish for broodstock this fall. They caught zero Delta Smelt in the 151 tows since November 17.

The Delta Smelt has been weaponized in recent years by politicians ranging from Donald Trump to Devin Nunes as “a little minnow” that has allegedly deprived corporate agribusiness interests of “their” irrigation water, even though there is no evidence that limited restrictions on Delta water exports from the State Water Project and Central Valley Project pumps to protect smelt during key migration times are responsible for major cutbacks in their water allocations.

Other fish species sampled in the fall survey didn’t fare very well either.

The abundance index for Striped Bass, a popular introduced gamefish that successfully coexisted with salmon and other fish species for over 120 years, was 52, representing an 80% decrease from last year’s index.

The abundance index for Longfin Smelt, a cousin of the Delta Smelt, was 28, representing a 36% reduction from the previous year. “This is the third year of decline following the recent high index of 141 that occurred in 2017,” noted White.

“Higher catch is usually expected in December as Longfin Smelt adults return to the estuary from the ocean to spawn as water temperatures drop in the late fall or winter,” he said.

The index for American shad, another popular gamefish species, was 1098, representing a 44% decrease from the previous year. Abundance indices have fluctuated substantially during the period 2016-2020, ranging from a low of 313 to a high of 3,086, said White.

The abundance index for Sacramento Splittail, a member of the minnow family found only in the Delta, was zero and shows “a continuing trend of very little to no catch of Splittail in FMWT.” No splittail were caught at any index or non- index stations the whole survey.

The abundance index for Threadfin Shad, an introduced forage species, was 635, representing an 85% increase from the previous year. This was the only species to show an increase this year. During the period 2015-2018, indices declined each year (806, 660, 291, and 198, respectively) but increased slightly in the past two years.

The dramatic decline of Delta smelt and other species, when viewed over the period of 53 years since 1967 when the State Water Project went into operation, is simply chilling

The Big Ag money behind the estuary’s collapse

Could that be because of the hundreds of thousands of dollars he has received from corporate agribusiness interests that support increasing water exports from the Delta rather than decreasing them?

Governor Newsom received a total of $755,198 in donations from agribusiness in 2018, based on the data from http://www.followthemoney.org. That figure includes $579,998 in the agriculture donations category, combined with another $116,800 from Beverly Hills agribusiness tycoons Stewart and Lynda Resnick, owners of the Wonderful Company and the largest orchard fruit growers in the world, and $58,400 from E.J. Gallo.

By fast-tracking the Delta Tunnel, supporting the voluntary water agreements, hiring grower William Lyons as a special “agriculture liaison” to the Governor’s Office, overseeing the issuing of a draft EIR that increases water exports for the state and federal projects rather than reducing them and releasing a controversial water portfolio that includes fast-tracking the Sites Reservoir, Newsom is apparently bending to the will of his agribusiness donors and sending Delta smelt, longfin smelt, Sacramento winter-run and spring-run Chinook salmon, Central Valley steelhead and other fish species to the scaffold.

The prospects for the survival of Delta smelt, imperiled salmon and other fish species are grim unless the state and federal governments allow more quality water to flow into the San Francisco Bay-Delta ecosystem at critical times.

And the Delta Tunnel that Governor Gavin Newsom is promoting will only make things worse for imperiled Delta fish species, as if they weren't bad enough already.

Background: the weaponization of Delta Smelt in the California water wars

The state and federal water contractors and their political promoters, including Congressman Devin Nunes and lame duck President Donald Trump, have blamed the Delta smelt for restrictions on Delta pumping for San Joaquin Valley irrigators.

In Trump's first interview after announcing he tested positive for the coronavirus, he  ranted about the smelt, claiming that California "sends millions of gallons of water out to sea, to the Pacific" because "they want to take care of certain tiny little fish that aren't doing very well without water, they have farms here and they don't get water.”

“It is so ridiculous they're taking the water and shoving it out to sea,” Trump said.

In May at the annual GOP Congressional Luncheon, in a turgid rant, Trump also blamed the smelt for his wealthy agribusiness supporters not receiving federal project water:

“And then you look at this massive turn, they had a turn, it takes a day to turn it, like a big faucet. And they turn it. And It veers all of the water out into the Pacific. It’s crazy.  So we’re all set except you need Gavin’s signature all of the way up. If you get Gavin’s signature – you can have water from Los Angeles all of the way up. And It’s the most incredible thing I’ve ever seen. I thought, I thought, it was the drought. No, he said, we have tremendous amounts of water but we send it out to the Pacific Ocean and it was over the smelt. So if you can get his signature.”

However, findings published in the journal San Francisco Estuary & Watershed Science in March 2019 reveal that water exports from the South Delta were actually limited by infrastructure and water quality concerns far more often than protections for endangered species.

During the 2010-2018 study period, 89% of Central Valley water flowing into San Francisco Bay was the result of salinity control and infrastructure constraints on water exports compared to less than 1.5% caused by endangered species act safeguards specific to protection of Delta smelt from entrainment in the export pumps, according to the study.

"Safeguards for the San Francisco Bay estuary's six endangered fish species led to relatively small increases in freshwater flow to the Bay," said Greg Reis, staff scientist for The Bay Institute and lead author of the research article. "In two of the nine years, we studied, protections for Delta Smelt did not limit water exports for even a single day -- the effect on water supplies of protecting this unique species, which functions as an indicator of overall ecosystem health, is far less than what's commonly reported."

Dr. Jonathan Rosenfield, Senior Scientist at San Francisco Baykeeper and co-author of this study, stated, “Despite water quality regulations that are intended to protect fisheries and wildlife populations in general, and endangered species act protections for the most imperiled fishes, the proportion of Central Valley river flows that make it all the way to San Francisco Bay has been declining for decades. Currently, Californians divert, on average, about 1/2 of the ecologically critical winter-spring runoff that would otherwise flow into San Francisco Bay, and the fish, wildlife, and water quality that rely on this water are suffering as a result."