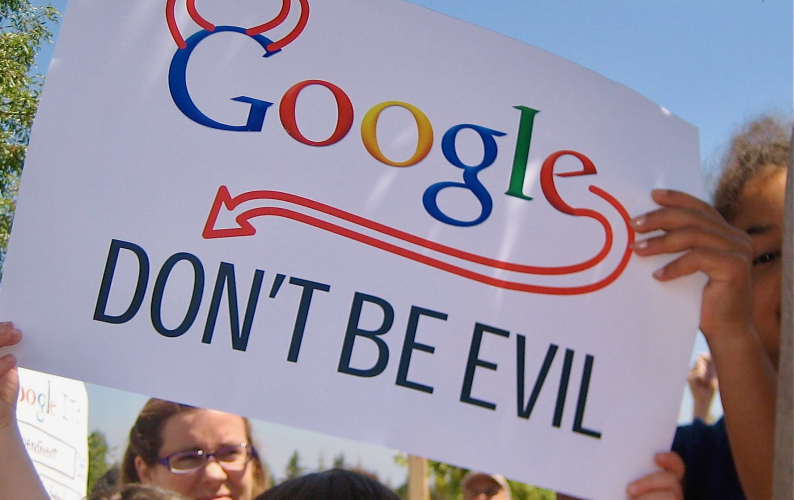 original image (1776x1117)
Decrying numerous policies and practices they say violate Google's "don't be evil" founding principle, more than 200 of the Silicon Valley tech giant's workers on Monday announced they are forming a union, a move that was applauded by progressive lawmakers and labor advocates nationwide.

The Alphabet Workers Union (AWU)—named after Google's parent corporation—says it "strives to protect Alphabet workers, our global society, and our world," and to "promote solidarity, democracy, and social and economic justice." It will operate as part of the Communications Workers of America and will be open to all 120,000 of the company's employees.

"For far too long, thousands of us at Google and other subsidiaries of Alphabet... have had our workplace concerns dismissed by executives," Parul Koul and Chewy Shaw, respectively AWU's chair and vice chair, wrote in a New York Times op-ed on Monday.

"Our bosses have collaborated with repressive governments around the world," Koul and Shaw said. "They have developed artificial intelligence technology for use by the Department of Defense and profited from ads by a hate group. They have failed to make the changes necessary to meaningfully address our retention issues with people of color."

"Most recently, Timnit Gebru, a leading artificial intelligence researcher and one of the few Black women in her field, said she was fired over her work to fight bias," Koul and Shaw continued. "Her offense? Conducting research that was critical of large-scale AI models and being critical of existing diversity and inclusion efforts. In response, thousands of our colleagues organized, demanding an explanation."

"Both of us have heard from colleagues—some new, some with over a decade at the company—who have decided that working at Alphabet is no longer a choice they can make in good conscience," added Koul and Shaw.

They then listed some of the successful employee activism that has borne results in recent years, including ending participation in the Project Maven AI warfare project with the Pentagon; terminating the Dragonfly censored search engine in China; winning a $15 per hour minimum wage for some subcontracted workers; and an end to forced arbitration of sexual harassment and other claims.

"As Alphabet workers, we can help build that world," they wrote.
Unionization is the exception to the rule in Silicon Valley. And unlike traditional labor unions, AWU is a so-called minority union—it represents only a small percentage of the company's 260,000-strong global workforce—that will not negotiate contracts. "Our goals go beyond the workplace questions of, 'Are people getting paid enough?' Our issues are going much broader," Shaw, an engineer in the San Francisco Bay Area, told the Times in a report about the new union. "It is a time where a union is an answer to these problems."

https://www.commondreams.org/news/2021/01/...
Add Your Comments
LATEST COMMENTS ABOUT THIS ARTICLE
Listed below are the latest comments about this post.
These comments are submitted anonymously by website visitors.