Add an Event
Newswire
Calendar
Features
Home
Donate
From the Open-Publishing Calendar
From the Open-Publishing Newswire
Indybay Feature
Related Categories: Santa Cruz Indymedia | Health, Housing & Public Services | Police State & Prisons
Police Chief Mills says New Homeless Camping Ordinance will go to City Council this Month
by Santa Cruz News
Sunday Jan 3rd, 2021 9:25 PM
In the height of the Covid-19 pandemic, which has the local homeless population scrambling for places to camp and shelter in place, Santa Cruz Police Chief Andrew Mills is soliciting support from the public for a new camping ordinance that he says will go before the City Council for approval in January. "It will need our support," Mills said. "We Have not had an ordinance to enforce due to a SCOTUS decision and council suspending our ordinance," he added. (Photo: Correspondence between Police Chief Mills and a member of the public concerning the homeless.) 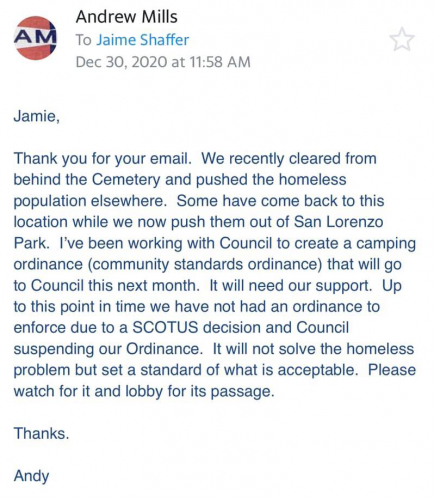 original image (798x918)
"It will not solve the homeless problem but set a standard of what is acceptable," Police Chief Mills said. "Please watch for it and lobby for its passage."

The Santa Cruz Police Department first proposed amending the city's camping ordinance to the city council in November of 2019, however the progressive majority on the council at the time voted to send the proposal to the Community Advisory Committee on Homelessness (CACH) for more input. At the April 14, 2020 city council meeting, it was announced that the camping ordinance amendments would be coming back to council later than expected due to the effects the pandemic had on staffing.

In November of 2019, the police department proposed the following amendments to the camping ordinance (Chapter 6.36) in place at the time:

• Continue to prohibit overnight sleeping or setting up bedding on public property. Currently, SCMC Section 6.36.010 prohibits sleeping or setting up bedding between the hours of 11:30 p.m. and 8:30 a.m. As proposed, camping between the hours of 10:00 p.m. and 7:00 a.m. would continue to be prohibited. A homeless person found in violation of new Section 6.36.030, however, would only be cited if he or she has immediate access to available alternative shelter (as determined by the Police Department) but, after notice and a reasonable opportunity to do so, declines to avail himself or herself of it.

• Current Section 6.36.010(c) makes it unlawful to establish or maintain a campsite at any time. New Section 6.36.020 would make it unlawful, between the hours of 7:00 a.m. to 10:00 p.m., to “establish or maintain outdoors or in, on, or under any structure not intended for human occupancy, a temporary or permanent place for cooking or sleeping, by setting up or maintaining bedding, sleeping bag, blanket, mattress, tent, hammock, or other sleeping equipment, or by setting up any cooking equipment, with the intent to remain in that location overnight.

• For both daytime and nighttime encampments, new Sections 6.36.020 and 030 would require, prior to issuing a citation, the person found in violation to be provided with notice and a reasonable opportunity move their belongings and vacate the area.

• Current Section 6.36.020 – CAMPING PERMITTED (renumbered as 6.36.040), which specifies circumstances under which camping is permitted in the City (e.g., legally established campgrounds, in rear yard or enclosed side yard of a residence, in a vehicle on business or church parking lots, etc.), remains largely unchanged, except to add camping events authorized by resolution of the City Council. This would include, for example, if the City Council identifies a suitable location on public or private property to establish an temporary emergency homeless shelter.

• Current Section 6.36.030 – PERMIT FOR CAMPING IN CITY PARKS (renumbered 6.36.050) authorizes the director of parks and recreation to issue a permit allowing camping in certain park areas under specified terms and conditions but prohibits any person or group from camping in a city park under that section for more than three nights in any twelve months. This section is largely unchanged, except that the three-day limitation could be extended by resolution of the City Council.

• Current Section 6.36.040 – PENALTY – SINGLE OFFENSE (renumbered 6.36.060), which declares a single offense as an infraction punishable by a fine of $20 or no more than 8 hours community service, would be modified to reduce community service hours to 3.

• Current Section 6.36.040 – PENALTY – SUBSEQUENT OFFENSE WITHIN TWENTYFOUR HOURS, which declares a subsequent offense for a violation of Section 6.36.010(c)

• Current Section 6.36.055, which requires dismissal of any citation issued to a person while on a on a waiting list for shelter at the Homeless Services Center or River Street Shelter, or when the National Guard Armory winter shelter is filled to capacity, would be deleted in its entirety.

• Current Section 6.36.060 – PUBLIC NUISANCE DECLARED, which authorizes, upon a determination that a campsite constitutes an immediate threat to health, safety or welfare, that it be removed “forthwith” would be removed. In its place is Section 6.36.080 – REMOVAL AND STORAGE, which authorizes the removal of attended or unattended encampments, pursuant to standard operating procedures (SOPs) to be established by resolution of the City Council, which are in the process of being developed. The intent here is to ensure that ample notice is provided before, during and after an illegally established encampment is closed by the City.

o For occupied encampments, that will entail hand-delivered notice to occupants and an opportunity to dismantle and relocate their equipment and belongings before City personnel will remove what remains. Unoccupied encampments will be provided posted notice.

o The length of notice will depend upon various factors to be fleshed out in the SOPs, such as location, size and upkeep of the encampment, the presence of any threats to health and safety, including of the occupants, and the presence of any hazardous conditions (such as fire risk factors).

o For items remaining after an encampment is closed, the City personnel will make a good faith attempt to identify and remove, tag, inventory and store personal effects from the encampment, other than stolen property, contraband, evidence of a crime, garbage, material constituting a bio-hazard or clearly discarded items.

o Following removal the site will again be posted with notice, to include a list of items removed, a telephone number for information on retrieval, the location where the material is stored, and the length of time during which the personal effects may be claimed.

Santa Cruz To Consider New Homeless Camping Rules
https://www.kazu.org/post/santa-cruz-consider-new-homeless-camping-rules
Add Your Comments
Support Independent Media
We are 100% volunteer and depend on your participation to sustain our efforts!