Listen to interviews with human rights activist Abbi Samuels and unhoused activist Hannah, who lives in a homeless encampment in San Lorenzo Park in downtown Santa Cruz. About two hundred people were camping in San Lorenzo Park when these interviews were recorded on December 20 as the city manager and police prepared to evict the campers and close the park. Twenty-three-year-old Hannah has been living in a tent for about eight months and works as a barista in Santa Cruz. There are currently no beds available in local shelters.

Abbi Samuels regularly connects unhoused people in Santa Cruz with valuable resources and services like food, showers, legal aid and laundry service. When Samuels heard that the Santa Cruz city manager had ordered the closing of San Lorenzo Park she contacted Gail Newel, health director of Santa Cruz County. Newel said that if the public health department had been contacted first, she would have advised against moving the homeless encampment out of the park because it violates CDC guidelines that recognize that dispersing encampments during the pandemic may lead to a spreading of the Covid-19 virus.

These interviews with Abbi Samuels and Hannah were recorded on Sunday, December 20, 2020 and originally broadcast on Thursday, December 24th on “Transformation Highway” on KZSC 88.1 FM at the University of California Santa Cruz.

Update Dec. 31, 2020: Since December 20th local authorities have been successful in closing parts of San Lorenzo Park and many campers have left for new campsites elsewhere, while the population of the homeless encampment in the upper duck pond area of San Lorenzo Park grew substantially.

On Monday, December 20, 2020 unhoused and housed activists acted in solidarity to create Stop The Sweeps, an organized effort to resist Santa Cruz police efforts to evict the on-going encampment in San Lorenzo Park. Since Monday police officers have been stopped from evicting the homeless encampment and closing the rest of the park. Activists used fencing to barricade the police away from the encampment, stopping the eviction.

On December 30 a lawsuit was filed in federal court to stop the evictions. The lawsuit was filed by the California Homeless Union and the Santa Cruz Homeless Union on behalf of Food Not Bombs, Alicia Avalos, Hannah Hegel, Chris Ingersoll and Randolph Tolley. As a result, a temporary restraining order was issued to stop the city from closing San Lorenzo Park. The Santa Cruz Sentinel’s Jessica York reported on Dec. 30; “In response, U.S. District Court of Northern California Judge Susan van Keulen granted an emergency temporary restraining order against the City of Santa Cruz, through Jan. 6, preventing it from shuttering San Lorenzo Park. The Court finds that Plaintiffs have shown that immediate and irreparable injury, loss, and/or damage will result to the movant before the adverse party can be heard in opposition,” van Keulen wrote in her order.”

In a press release Keith McHenry of Food Not Bombs Santa Cruz wrote;

"Community members successfully blocked the City of Santa Cruz from
implementing phase 2 of their Holiday Eviction of over 100 unhoused
people in San Lorenzo Park. The Santa Cruz Homeless Union and Food Not
Bombs file lawsuit to stop the evictions in Federal Court this morning
on day 3 of the community blockade in Case 5:20-cv-09425 Homeless Union
et al v. Bernal et al Complaint. The city named for the Holy Cross announces
the eviction of nearly 200 unhoused people into the doorways of struggling
business during the holiday to celebrate the birth of the homeless baby Jesus.”

Background: On December 17th, 2020 the city manager of Santa Cruz – Martin Bernal - issued emergency executive order number 2020 – 24 ordering the temporary closure of downtown San Lorenzo Park. The city-run homeless campground that was established in the benchlands area of the park was moved recently to De Laveaga Park, though 200 or more people remained in other areas of San Lorenzo Park, many in tents near the duck pond and lawn bowling greens.
According to the executive order, the temporary closure was to be completed in phases, with the whole park being closed by January 6, 2021. 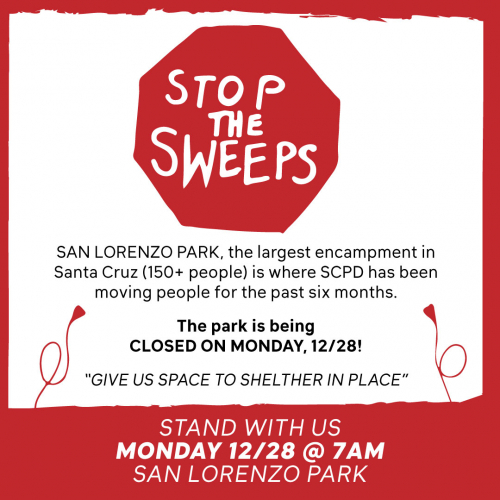 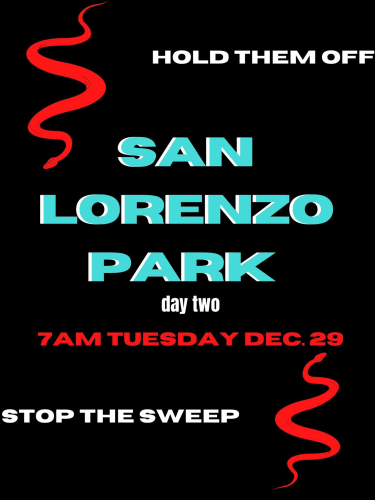 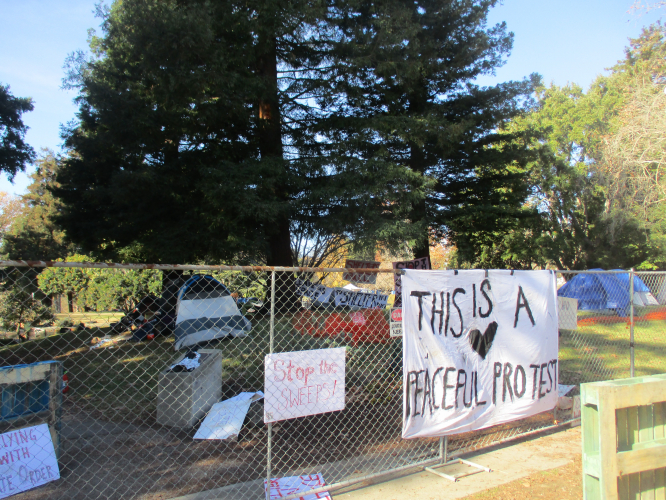 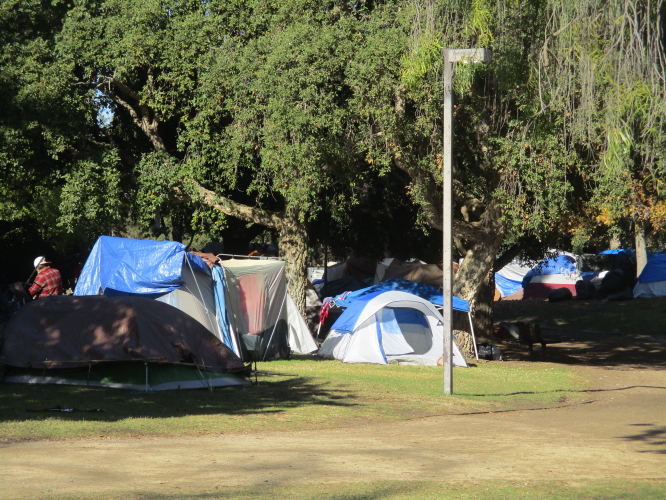 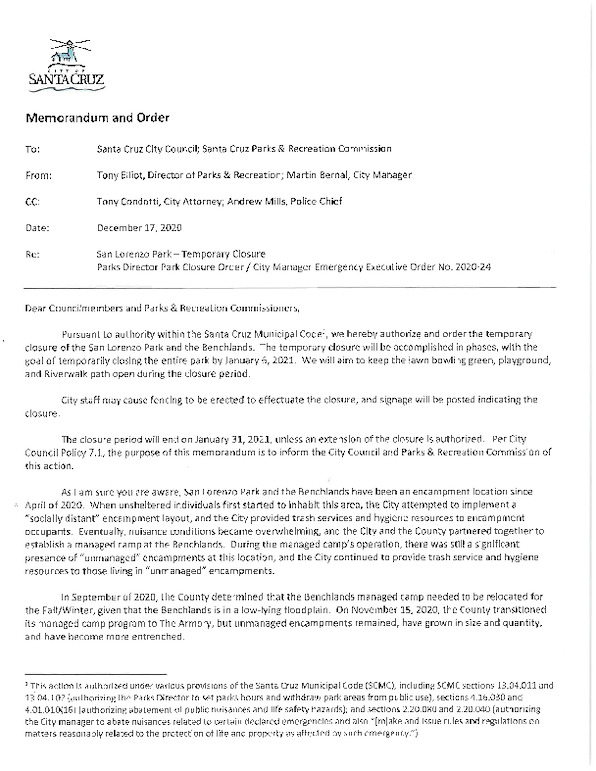