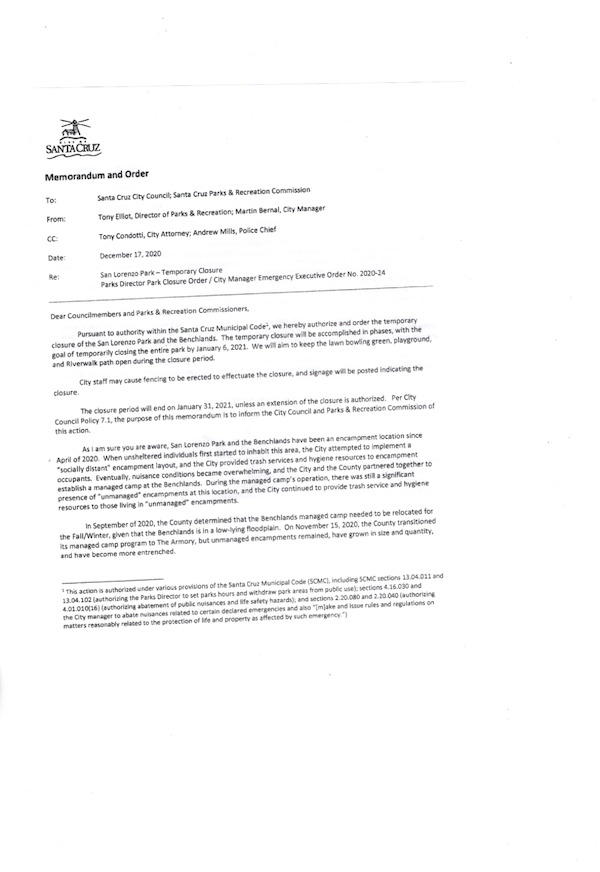 Kuhl and Gelblum's responses were forwarded to me.

I'm reprinting Gelblum's because (a) I regard it as articulate, concise, and frighteningly relevant; and (b) it is a public document since it was sent to a Martin Bernal, the Santa Cruz City Managler (or City Manager, as he styles himself). Over the years I've had (and probably will continue to have) real problems with the ACLU's positions regarding civil rights for homeless folks here in Santa Cruz. But Gelblum's public positions on local issues have gotten stronger over the past few years.

Kuhl operates at a ground level directly with homeless people both in her job, her struggles against repressive behavior from city officials that directly threaten her family's health and well being. The Santa Cruz Union of the Homeless will also be throwing its own masked-and-distanced Memorial at Laurel and Front Sts. Monday afternoon 4 PM 12-21.

Abbi Samuels reportedly e-mailed County Health official Gail Newel: "Can you please let me know why the City is evicting people at the encampment at San Lorenzo against CDC guidelines? The camp is the cleanest encampment I have seen in Santa Cruz. The CDC says dispersing encampments leads to more spreading of COVID. The shelters are all full."

Newel replied: "Hi, Abbi, I agree with you and share your concerns. This was a decision of the City of Santa Cruz, independent of the County for which I work. Public Health was not consulted about this. If we had been, we would have advised against this for the very reasons you cite. Thank you for being an involved community member."

Samuels is an ACLU Board member and active Copwatcher whose facebook posts have document repeated and selective harassment of survival camps and vehicular residents.

Some activists are calling for community members to come down to San Lorenzo on Monday and the days that follow to witness, support, and assist those whose housing is being uprooted without alternatives provided.

In the absence of public accountability at meetings the community can weigh in on, activists have taken to doing speak-out's outside the homes and offices of the powerful and privileged creating increased public danger.
http://huffsantacruz.org
§The Bernal Decree Evicting 200 in Disregard of CDC Guidelines
by Robert Norse
Monday Dec 21st, 2020 10:28 AM 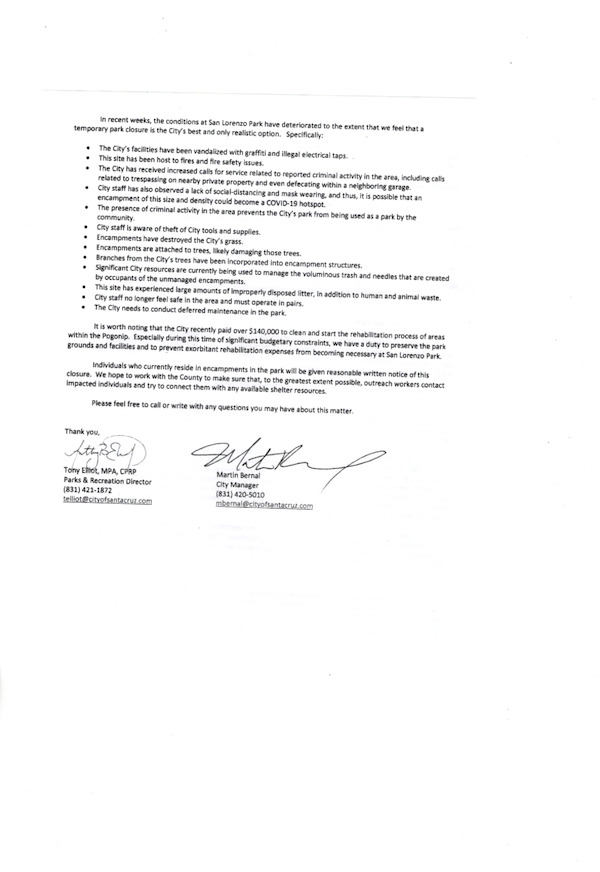 Download PDF (636.6KB)
Bernal's house at 96 Brookwood Dr. near Dominican Hospital was the scene of a small speak-out protest Sunday night. Given the lack of accessibility public officials have engineered, activists believe such protests are necessary and inevitable.
http://huffsantacruz.org
§An activist with the ACLU speaks out
by Robert Norse
Monday Dec 21st, 2020 10:28 AM 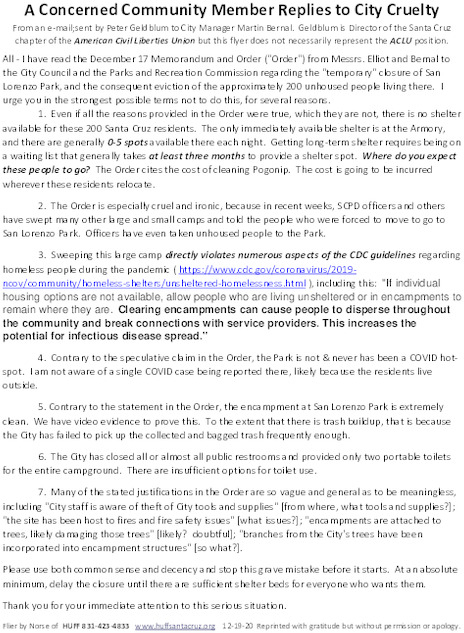 Download PDF (638.9KB)
Peter Gelblum, though not necessarily speaking for the ACLU, quickly responded to Bernal's "dead of winter" "no shelter alternatives" order
http://huffsantacruz.org
§A fighting mom talks sense to the Cruel and Callous
by Robert Norse
Monday Dec 21st, 2020 10:28 AM 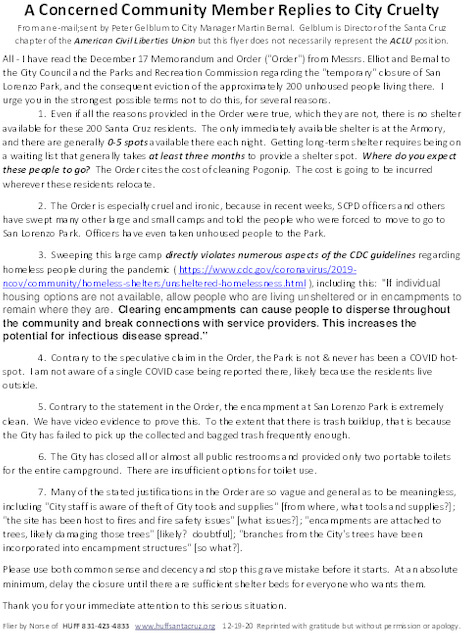 Download PDF (639.0KB)
Alicia Kuhl and her family were recently denied the right to park on Olive St. by the reactionary City Council in a move prompted by right-wing activists. The Council action reversed the Public Works Commission's decision supporting the right of the public to park on public streets in spite of political pressures from homeless-hostile NIMBY's.
http://huffsantacruz.org
Add Your Comments
LATEST COMMENTS ABOUT THIS ARTICLE
Listed below are the latest comments about this post.
These comments are submitted anonymously by website visitors.