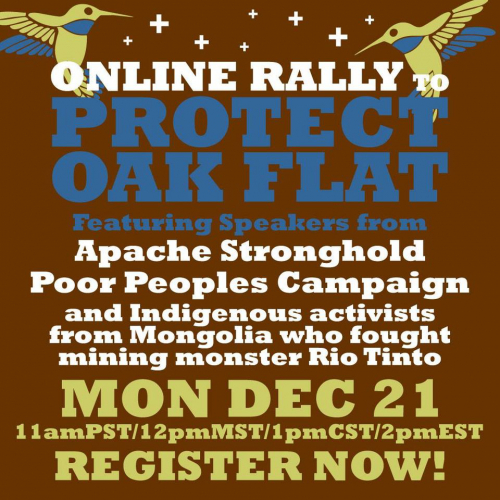 Join the Apache Stronghold for the Day of Prayer and Action at 12pm MST / 2pm ET to defend the sacred land Oak Flat. Speakers from the Poor People’s Campaign and Oyu Tolgoi Watch, activists from Mongolia who are also fighting monster mining company Rio Tinto, will join us. Learn what you can do to be engaged.

Apache Stronghold, San Carlos, Arizona, is a 501(c)3 nonprofit community organization of individuals who come together in unity to battle continued colonization, defend Holy sites and freedom of religion, and are dedicated to building a better community through neighborhood programs and civic engagement.

We work from San Carlos, Arizona connecting Apaches and other Native and non-Native allies from all over the world. Chi'chil Bildagoteel (also known as Oak Flat) is a sacred site for our Apache people and many other Native Americans. This is a place that has special significance— a place where we pray, collect water and medicinal plants for ceremonies, gather acorns and other foods, and honor those that are buried here.

We have never lost our relationship to Chi'chil Bildagoteel, though the U.S. Government, at times in our history, has imprisoned us on our Reservations and not allowed us to come here. We have established an encampment to protect the Holy Ground at Chi'chil Bildagoteel with its four crosses, representing the entire surrounding sacred area, including its water, animals, oak trees, and other plants central to our tribal identity. The four crosses are now part of the body of Chi'chil Bildagotee

original image (915x430)
END_OF_DOCUMENT_TOKEN_TO_BE_REPLACED
Add Your Comments
Support Independent Media
We are 100% volunteer and depend on your participation to sustain our efforts!