by Harvey Goldberg
"#ThePresidentialTicketOfHope will be on the ballot on #7thFebruary. Thanks to everyone who was vigilant and mobilized! Thanks for international solidarity! The Ecuadorian people have enforced their right to choose in democracy,” tweeted Andrés Arauz, candidate for President for UNES in response to his ticket being given firm certification by the election authorities.
Photo credit: Wikipedia 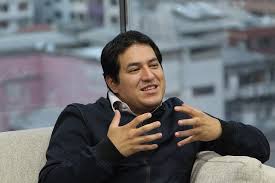 QUITO – Electoral authorities announced “firm” certification of the electoral alliance Union Por La Esperanza (UNES - “Union for Hope”) which stands an excellent chance to win elections scheduled for February, 2021. The certification appears to have concluded years long efforts to obstruct left electoral forces allied with former President Rafael Correa from participating in elections and opens the door for voters to return them to power.

The ticket of Andrés Arauz for President and Carlos Rabascall for Vice-President, and the UNES candidates for the National Assembly were qualified “in firm,” announced Diana Atamaint, President of Ecuador's National Electoral Council (CNE) on December 8, 2020.

Candidate Arauz welcomed the decision in a tweet, “#ThePresidentialTicketOfHope will be on the ballot on #7thFebruary. Thanks to everyone who was vigilant and mobilized! Thanks for international solidarity! The Ecuadorian people have enforced their right to choose in democracy,” he wrote.

Arauz also sounded a warning that there are those in the establishment looking for a way to postpone the elections, because they fear they cannot win them. "I still do not rule out that this is the intention with other candidates who are postponing. But we are already on the ballot and that is a joy for all the Ecuadorian people who will be able to decide their future and their destiny," said Arauz in an interview with Periodismo Público.

Arauz has claimed that elements of the government wish to postpone the elections in order to carry out privatizations, because they fear he will win and put a stop to it. The People's Dispatch reported that the government began privatizing the state-owned oil company, Esmeraldas Refinery and the electricity company, Electricity Corporation of Ecuador (CELEC), among others.
( https://www.opendemocracy.net/en/democraciaabierta/political-tirals-electoral-bans-battle-ecuador-democracy/ )

“[President Lenín] Moreno is five months away from leaving his mandate. He has tried to privatize the telephone companies, the hydroelectric companies, the refineries, the telecommunications, among other companies. Now they want to stay in power in order to implement these privatizations," said Aruaz's running mate Carlos Rabascall, reported the web site Lahaine.org .
( https://www.lahaine.org/mm_ss_mundo.php/finalmente-aprueban-la-formula-del )

One key issue in the election is Ecuador's relationship with international banks. Rabascall has said, “[j]ust as Alberto Fernandez [President of Argentina] did, we have to tell the IMF: 'gentlemen, we cannot comply with the conditions that you put on Ecuador'. By 2021, the organization demands that we reduce by three billion dollars the expense of wages. That would mean cuts in health, education, security and justice,” reported Lahaine.com.

Former President Rafael Correa isn't running, though UNES tried to get him certified as their Vice-Presidential candidate and was denied, before Rabascall was tapped. Correa is an issue in the election as he is a huge bogeyman for the establishment and there has been a protracted campaign against him and those associated with him. There has been more than three years of daily propaganda against Correa by all major media outlets, private and public. There have been legal prosecutions against Correa, including a controvercial conviction. On the other hand, Correa remains a hero and a champion of the poor to many, who see President Moreno as a traitor to their cause.

“Moreno came to power with the progressives and is said to have betrayed Correa. But it is not so. He betrayed the Ecuadorian people who had elected him to continue the Citizens Revolution process,” said Rabascall according to Lahainelcom.

Arauz and Rabascall will compete in elections scheduled for February 7, 2021 against a field of sixteen other presidential tickets. It will include Alvaro Noboa, a Banana Plantation magnate, who has run for President six times before, whose candidacy was also approved by the CNE on December 8.
( https://es.wikipedia.org/wiki/Elecciones_presidenciales_de_Ecuador_de_2021 )

The establishment has consolidated behind the candidacy of Guillermo Lasso, who is heading an alliance of Ecuador's two largest right-wing parties. The majority of polls show Lasso in a close race with Arauz for the top two spots, with neither of them having enough support to win in the first round of voting. Running third in the polls is Yaku Perez, candidate for the Movimiento de Unidad Plurinacional Pachakutik (“Pachakutik United Plurinational Movement”) an Indigenous party. Perez has led struggles to limit mining and has called for popular referendums on the issue.
( https://es.wikipedia.org/wiki/Anexo:Sondeos_de_intenci%C3%B3n_de_voto_para_las_elecciones_generales_de_Ecuador_de_2021 )

The addition of the very wealthy Noboa could shake up the race, but it is not known how as he has not been included in most polls. The candidate for the governing party of President Moreno, Alianza PAIS, Ximena Peña, has been polling at less than 2 percent.

The accuracy of polling in Ecuador is suspect. Polls in nearby Bolivia were wildly inaccurate regarding that country's recent Presidential election. The majority of polls in Bolivia had predicted that Luis Arce, candidate of the Movement for Socialism, would be forced into a runoff which he would probably lose, but Arce won easily in the first round with 55 percent of the vote, more than 25 percent more than the the leading establishment candidate. In question is whether corporate polling organizations accurately poll poor workers, farmers, and Indigenous peoples. 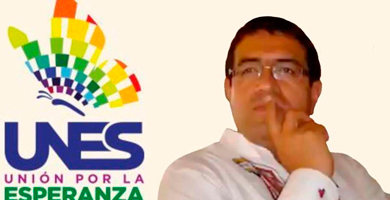 Rabascall has said, “[j]ust as Alberto Fernandez [President of Argentina] did, we have to tell the IMF: 'gentlemen, we cannot comply with the conditions that you put on Ecuador'. By 2021, the organization demands that we reduce by three billion dollars the expense of wages. That would mean cuts in health, education, security and justice,” reported Lahaine.com.
Phot credit: UNES
§Yaku Perez, candidate for President for Pachakutik
by Harvey Goldberg 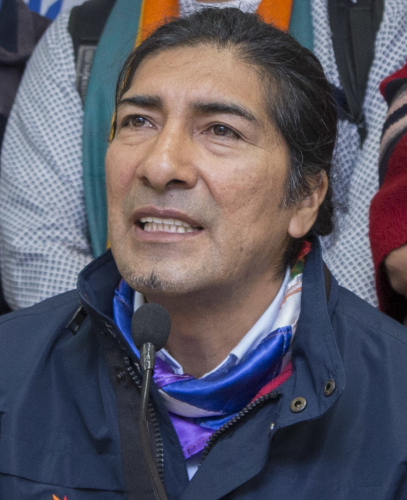 original image (880x1081)
Perez has led struggles to limit mining and has called for popular referendums on the issue.
Photo credit: Wikipedia
Add Your Comments
Support Independent Media
We are 100% volunteer and depend on your participation to sustain our efforts!