Add an Event
Newswire
Calendar
Features
Home
Donate
From the Open-Publishing Calendar
From the Open-Publishing Newswire
Indybay Feature
Related Categories: East Bay | Media Activism & Independent Media
Mumia for Pacifica Democracy; Court Attack on Pacifica Fails
by Pacifica Fighback
Sunday Dec 13th, 2020 12:18 PM
Mumia has come out against the centralized corporate bylaws being pushed in large part by a faction that controls KPFA. They recently tried to get a court to take-over Pacifica so they can break up the foundation and sell and shutdown other stations in the network.
They have secret millionaire backers who have hired a law firm that changes more than $300 an hour and submitted an 800 page document to the Court in Los Angeles for the court to seize Pacifica. This same group has been suing Pacifica for years and also pushed for voluntary bankruptcy. 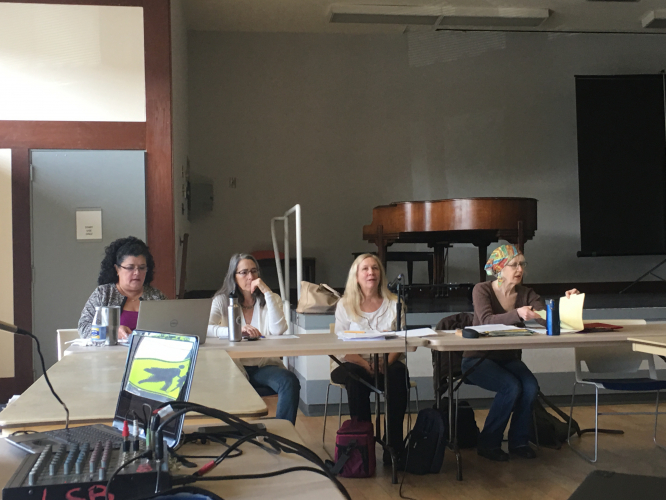 ~ Mumia Abu Jamal, December 7, 2020
ATTEMPTED COURT SEIZURE
On Tuesday, December 8, four KPFA plaintiffs – Pacifica National Board (PNB) member Andrea Turner-Dyson, Local Station Board (LSB) Chair Christina Huggins, LSB member Donald Goldmacher, and former LSB member and secretary, Craig Alderson – sued to put Pacifica into receivership. Their complaint featured provably false claims about Pacifica’s relationship with the Corporation for Public Broadcasting and the status of our audits, and includes events that occurred while many of the “New Day Pacifica”(NDP) / “Pacifica Restructuring Project” actors were part of management and/or governance majorities.The Los Angeles court attack was sprung just days after the PNB agreed on a timeframe for a 2021 Bylaw Replacement Referendum from NDP. Although most 4th graders could have convincingly argued that NDP’s “new” proposal was too similar to the resoundingly rejected 2020 Referendum to warrant the expenditure of the organization’s limited funds, the Board acceded to the NDP demand / threat rather than going to court, after which the NDP backers immediately took Pacifica to court! So much for limiting legal expenses… Apparently, there is no pleasing these folks. While the judge rejected the plaintiffs’ request for immediate control, we are not safe. Not safe from frivolous lawsuits or from repeated referenda, or generally, from what seems a plan to drive the organization into bankruptcy one way or another.
Want to SAVE Pacifica dollars and protect democracy? Squash the “New Day” petition and choose real dialogue! UN-SIGN the “New Day” Petition: UNSIGN PETITION if you already signed it.
We’re fighting back against continuing attempts to take down Pacifica!Join us: Email pacificafightback-subscribe [at] lists.riseup.net to get on our low volume list.
Listen to a deconstruction of the “New Day” Bylaw Replacement plan on the WBAI archives: BATTLE FOR COMMUNITY RADIO
A “NEW DAY”… REALLY?
Last October, as “Pacifica Restructuring Project”, Houston’s Bill Crosier and Adrienne LaViolette came to New York, met their crony, then-Interim Executive Director John C. Vernile, joined men with guns, and traumatized and locked out WBAI staff. On the West Coast that day, Crosier and other members of the PNB sued Pacifica to force a vote on their proposal to eliminate staff, affiliates, and poor people from Pacifica governance, to literally strip out Pacifica’s commitment to diversity, peace, and justice, and install a handpicked unaccountable Board with predetermined replacements. The rogues spent more than $80,000 of Pacifica’s money on guards and lawyers, etc. to carry out and defend their unauthorized seizure, which was ruled illegal and overturned by a court in New York, but not before it cost WBAI untold amounts by shutting off their on-air fund-drive, and piping in content from KPFA and KPFK. Cost? Another $150,000.So aside from threats to sue and actual lawsuits, what does “New Day Pacifica” bring us? Their latest effort to fundamentally and irreversibly change Pacifica’s Bylaws to cancel member input and take all power into their faction would:

Keep Local Station Boards, but as toothless advisory bodies with no oversight of local management, budget or programming policies.

Name themselves national board officers until 2024, with no opposition allowed to run against them.

Add three to-be-appointed “experts” to the diminished national board.

Halve affiliate stations’ representation and force them into a third -party organization.

Reduce staff representation by 60%, permanently divide paid & unpaid staff who do similar work into separate classes of membership, and discriminate against the more numerous unpaid staff.

WHEN THEY SHOW YOU WHO THEY ARE… BELIEVE THEM!
These Pacifica Restructuring Project (PRP) / New Day Pacifica (NDP) folks seem incapable of forthright conduct. What does that, in combination with their particular Bylaw replacement ideas, say about who they are?To make us spend Pacifica money on another referendum instead of providing for our stations during COVID-restricted broadcasting, they need 5% of Pacifica members to sign their petition. If you have signed, please undo that by writing to them, the National Election Supervisor, and to us, here: UNSIGN PETITION
Members are entitled to communicate with other members. That’s why you get email from us and from them. But they are using the Foundation’s list to solicit funds for themselves, in competition with our stations and the Foundation.
PLEASE PAY CLOSE ATTENTION
Please do not support “NDP” with your dollars.Support genuine dialogue, and do not reward threats and sneak attacks.While some Pacifica listeners struggle to feed families and stay housed, well-to-do mainstream political party clubs are being recruited to throw some spare change into station membership so as to vote to replace the Bylaws.Help our stations now and ensure that you are in position to vote in the referendum, if needed: Establish or renew your $25 membership now…
KPFA KPFK KPFT WBAI WPFW Pacifica Foundation Pacifica Archives
Unlike the splitters and breakers at NDP, we are not using the membership lists to solicit funds on our own behalf or to help break Pacifica up to monetize its parts — we are seeking your help to keep Pacifica alive, whole and impactful to the maximum of its potential!
Fight back, Pacifica people! Fight like life depends on it because for some, it does. Examine what the not-quite-past U.S. elections highlight about this country. For many, this is not a revelation. It is where we’ve been living. Diversity and power-sharing are strengths.
Build a more inclusive Pacifica.
Build a deliberately anti-racist Pacifica.
Stay safe and stay strong!

Three members of KPFA’s local station board, Chair Christina Huggins, Andrea Turner, Donald Goldmacher and their lawyer, traveled down to Los Angeles on Tuesday, violating California’s COVID19 shelter in place order, to try to convince a court to place Pacifica’s assets into a receivership and remove control of the Foundation from its members. Update: There is a 4th plaintiff, former KPFA LSB member Craig Alderson. The attorney is Stephen Jaffe, an SF employment lawyer and unsuccessful congressional candidate). Their effort was unsuccessful and their emergency request was denied by the court.

Their filing, apparently an error-riddled 800 page tome, was not available on the LA County Superior Court site as of the time of this newsletter, but was said to have asserted incorrectly that Pacifica’s buildings were about to be foreclosed upon and that the fiscal year 2017 audit had not been completed. (It was completed some time ago). The judge denied the request in a brief hearing of less than 30 minutes duration and castigated the plaintiffs for procedural irregularities.

Among the procedural irregularities was the failure to serve the lawsuit. The plaintiff’s attorney merely called a few officers of the board on the telephone at 8:00 am the day before the hearing.

Receivership, which is normally requested by an organization’s creditors, not its member-elected delegates, hands over all of the foundation’s assets, including all five station radio licenses, title to all owned real estate, and all of the money in any the station bank accounts, to an independent party appointed by the court. The receiver maintains possession of all assets until discharged by the court, The receiver makes all financial and operational decisions during the period of receivership and may shed assets and discharge workers to attain profitability. With the permission of the overseeing judge, a receiver can act to liquidate an organization and can also petition to terminate or not renew collective bargaining agreements.


The three KPFA local station board members did not inform the KPFA local station board of their actions, and one of them Andrea Turner, who is a PNB director, did not inform her national board colleagues. Their bizarre actions happened as other members of their faction send pleading emails to members to sign a petition for a bylaws referendum, which would no longer be possible under receivership, as members would lose their voting rights for the duration of the receivership.

While the “emergency request” was formally and finally denied, the full lawsuit will continue wending its way through the court system, with Pacifica members like you footing the bill.

Pacifica members upset at the actions by delegates to take away the Foundation from its members can email the KPFA local station board at kpfalsb [at] googlegroups.com.

If you value being kept up to speed on Pacifica Radio news via this newsletter, you can make a little contribution to keep Pacifica in Exile publishing . Donations are secure, but not tax-deductible.

Started in 1946 by conscientious objector Lew Hill, Pacifica’s storied history includes impounded program tapes for a 1954 on-air discussion of marijuana, broadcasting the Seymour Hersh revelations of the My Lai massacre, bombings by the Ku Klux Klan, going to jail rather than turning over the Patty Hearst tapes to the FBI, and Supreme Court cases including the 1984 decision that noncommercial broadcasters have the constitutional right to editorialize, and the Seven Dirty Words ruling following George Carlin’s incendiary performances on WBAI. Pacifica Foundation operates noncommercial radio stations in New York, Washington, Houston, Los Angeles, and the San Francisco Bay Area, and syndicates content to over 180 affiliates. It invented listener-sponsored radio.

Three members of KPFA’s local station board, Chair Christina Huggins, Andrea Turner, Donald Goldmacher and their lawyer, traveled down to Los Angeles on Tuesday, violating California’s COVID19 shelter in place order, to try to convince a court to place Pacifica’s assets into a receivership and remove control of the Foundation from its members. Update: The 4th plaintiff is Craig Alderson, a former KPFA LSB member and the attorney is Stephen Jaffe, an SF employment lawyer and unsucessful Congressional candidate. Their effort was unsuccessful and their emergency request was denied by the court.

https://pacificafightback.org/mumia-for-pa...
Add Your Comments
Support Independent Media
We are 100% volunteer and depend on your participation to sustain our efforts!