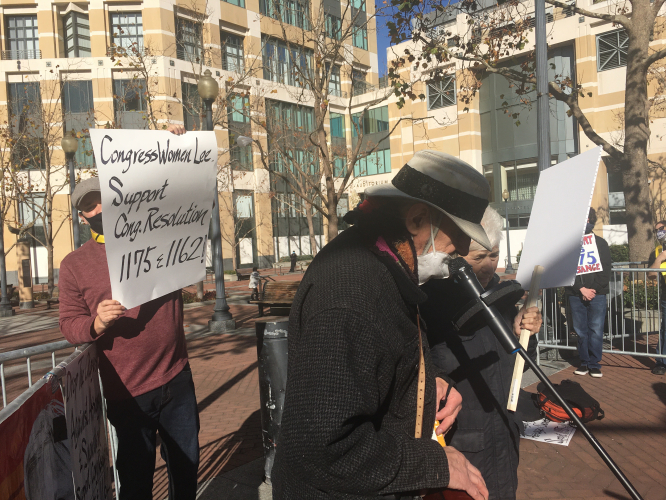 original image (4032x3024)
Speak-outs were held at the Congressional offices of Congresswomen Barbara Lee, Zoe Lofgren and the home of Nancy Pelosi on December 10 /11 to call for support for Congressional Resolutions 1175 and 1162 which called for dropping the charges against Julian Assange and Edward Snowden.

A statement was already read by fomer OSHA WPP Investigator and lawyer Darrell Whitman representing Whistleblowers United.
The days of action was initiated by
Bay Action Committee To Free Julian Assange
http://bayaction2freeassange.org
It was endorsed by United Front Committee For A Labor Party
https://foramasslaborparty.wordpress.com

IFJ In Defense of Assange "a threat to journalists and journalism around the world"
https://www.ifj.org/fileadmin/user_upload/Urgentmotions_IFJCongress_2019.pdf_170619.pdf?fbclid=IwAR3DElZ6rIh5OgpGVCLtgEuGKvC0toyQPAw0SF2pg9NRy3dGSx1Ln3CWXrk

There is no more important freedom guaranteed by our Constitution than the First Amendment’s freedom to speak truth to power and hear that spoken truth. Ed Snowden’s courageous revelation about the systematic capture and collection of private information by the National Security State ranks alongside Daniel Ellsberg’s revelations of war crimes a half century ago as a singular moment in the long struggle against abuse of power by seemingly unaccountable public officials.

I can say this with great confidence because my group of whistleblowers, who joined together over the last six years to investigate this war on whistleblowers have confirmed there is a vast network of corrupt federal officials who systematically obstruct whistleblower investigations to enrich themselves and preferred others.

The cost of this war can be measured not only in dollars - tens of billions if not trillions of dollars, but also in injuries, damages and the deaths of many in the U.S. and around the world. This unconscionable abuse of power has been widely reported to other federal agencies and to dozens of members of Congress, who have failed to take any action to protect either whistleblowers or the American people.

Thus, protecting Julian Assange and Ed Snowden can only be done by recognizing and ending the broad war on whistleblowers their cases represent. Whistleblowers United, which I represent, has released hundreds of documents to the public by putting them in the public record with the National Archives and Record Administration (NARA), and will soon release new documents showing beyond any doubt that this corrupt network exists, identifying hundreds of corrupt officials and political actors, and describing their criminal activities.

We will then demand that these officials be removed, investigated and prosecuted to hold them accountable for their wrongdoing. That is the only way to end this war and restore faithful truth-tellers and publishers of truth-telling to their rightful place in our society.
For Whistleblowers United, 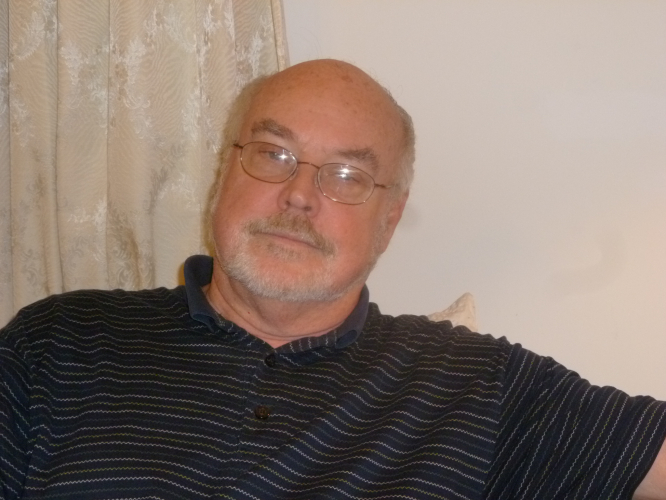 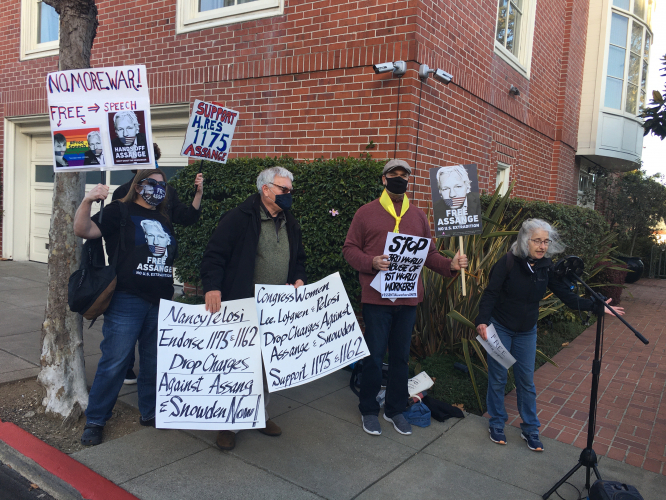 original image (4032x3024)
Speakers demanded that Congresswoman Nancy Pelosi who is the Speaker of the House support Congressional resolutions 1175 and 1162 calling for the dropping of charges against journalist Julian Assange and whistleblower Edward Snowden.
https://youtu.be/-WTRQR2au60
§A speaker from Code Pink in Oakland
by Labor Video Project
Sunday Dec 13th, 2020 11:15 AM 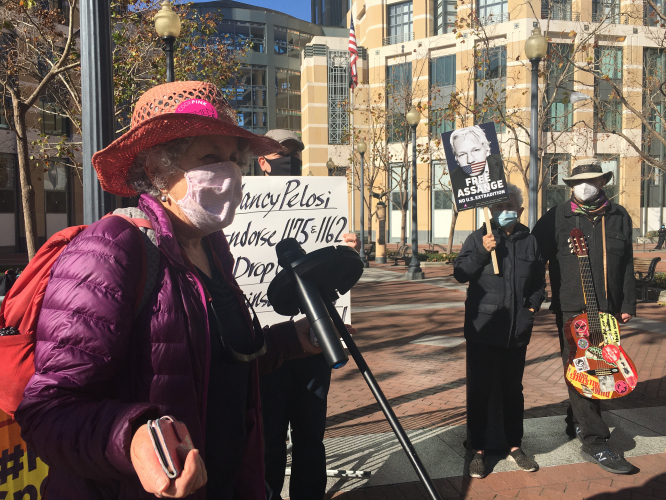 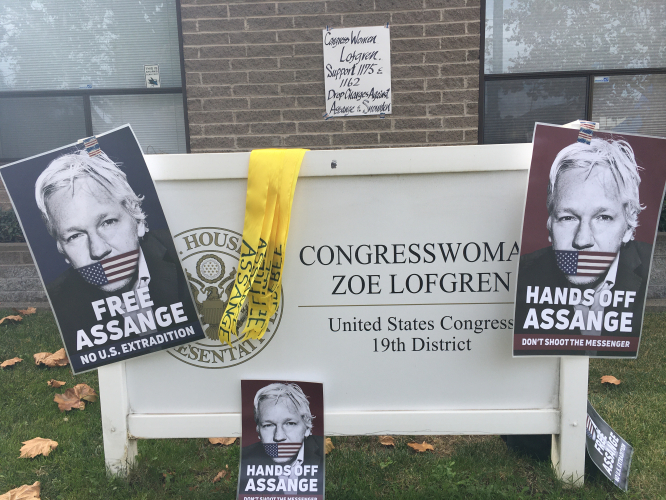 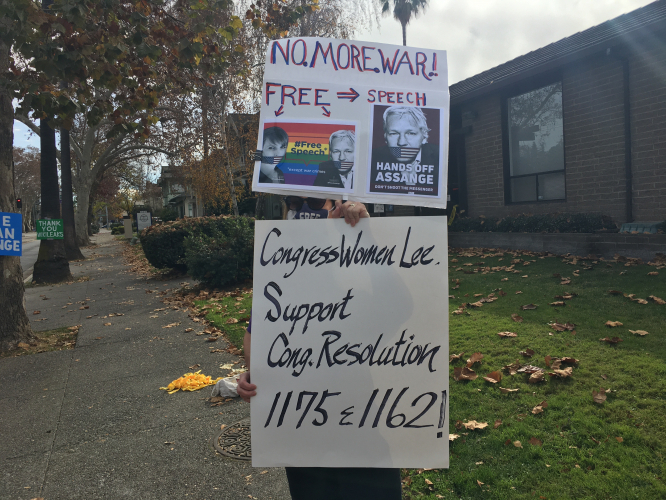 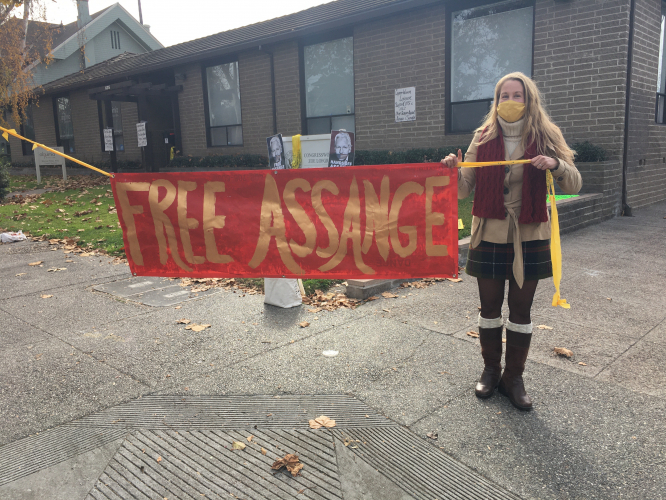 original image (4032x3024)
A banner was held demanding that Julian Assange be freed in front of Congresswoman Zoe Lofgren's office in San Jose.
https://youtu.be/-WTRQR2au60
Add Your Comments
Support Independent Media
We are 100% volunteer and depend on your participation to sustain our efforts!