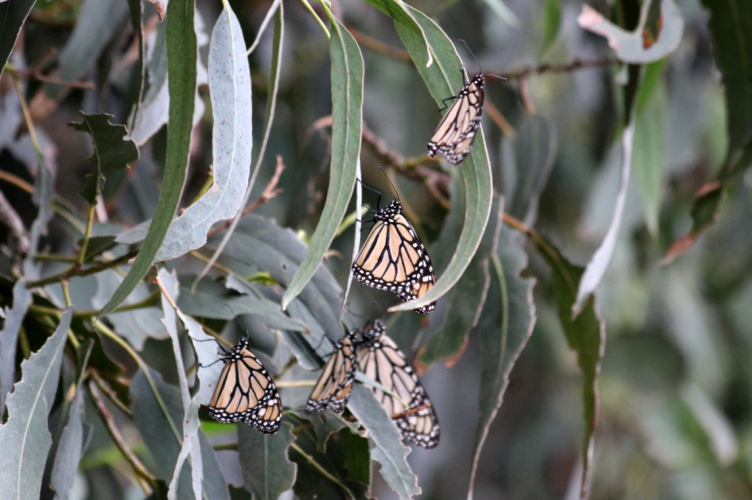 original image (1143x759)
PORTLAND, Ore. (November 30, 2020)---Early count numbers from the Xerces Society’s Western Monarch Thanksgiving Count suggest that the western migratory population is at an all-time low. Numbers have been received from 74 sites—over 30% of the data anticipated this year—and only 1,224 monarchs have been reported. The greatest number of monarchs at a single site so far is 550, at Natural Bridges State Beach in Santa Cruz. If this early data reflects monitoring at the rest of the sites, we may see fewer than 10,000 monarchs overwintering in California this year.

This is a significant decline from the low numbers of the last two years where the total hovered just under 30,000 monarchs. These numbers are a tiny fraction of the millions of monarchs that likely visited overwintering sites in the 1980s and the hundreds of thousands of monarchs that graced California’s coast as recently as the mid-2010s.

“With nearly a week left in the Thanksgiving count, we still hold some hope that monarch numbers will improve,” said Emma Pelton, conservation biologist at the Xerces Society. “Cooler weather and late arriving migrants could boost totals and many important overwintering sites will get counted for a second (or third) time. The efforts by our volunteer community scientists to count sites in the coming days is vital.”

However, it seems very likely that this year will mark a record low population count. The poor showing at the overwintering sites was somewhat predicted by an anemic breeding season where monarchs were scarce in much of the West outside of California and Utah. (Note that Utah likely contains eastern and western monarch migrants).

“It is imperative that we continue to monitor monarch overwintering sites through this season and beyond,” said Pelton. “We need to continue to understand population numbers so we can better respond to this decline.”

Monarchs are not the only butterflies having a poor year in California. Surveys by Art Shapiro, a professor at the University of California at Davis who has been monitoring butterflies across central California for over 40 years, found that numbers were low for most butterfly species at low elevation sites.

Why is this such a bad year?

“Monarch populations may be suffering from death by a thousand cuts,” said Scott Black, executive director of the Xerces Society. “Destruction, degradation and neglect of overwintering sites, climate change and overuse of insecticides are likely contributing factors.”

Protecting monarch overwintering sites is paramount. Many are still subject to development on private lands and many sites on state lands are in urgent need of restoration and management.

A study by the Xerces Society and the University of Nevada, Reno found that milkweed plants, essential food for monarch caterpillars, in California contained pesticides at all sites sampled, which included conventional and organic agriculture, wildlife refuges and urban areas. Many of the insecticides found in milkweeds can harm or kill monarch caterpillars.

Other issues may also be impacting monarchs. The impact of severe wildfires is largely unstudied, but may have influenced migration or late season breeding. Changing temperatures may play a role; they were warmer in California during much of the late summer and early fall, but November temperatures have been average. Below average rainfall could possibly limit the availability of nectar during migration and at overwintering sites. An unusually high number of reports of late breeding and captive rearing near the coast—primarily on tropical milkweed (Asclepias curassavica)—may also suggest there are higher numbers of non-migrating monarchs than usual which can negatively impact the population.

The most striking thing about the dwindling number of monarchs is that this is closely following what models predicted. A 2017 study by Cheryl Schultz, a professor at Washington State University, and coauthors, predicted if the population dropped below 30,000 monarchs—which it did in 2018 and 2019—there was a high probability that it would spiral down further. Unfortunately, we seem to be witnessing that prediction come true.

The western monarch’s bad news comes on the heels of a recent court decision that the State of California does not have the legal authority to protect insects under the California Endangered Species Act, limiting the options for state protection of monarchs. Federal protection for monarchs under the Endangered Species Act is currently under consideration by the U.S. Fish and Wildlife Service and a decision is expected in mid-December. Protection under state or federal law is desperately needed if we hope to avoid total population collapse.

“We must hold out hope that we can still recover monarchs in the West,” said Sarina Jepsen, director of the endangered species program at the Xerces Society. “But we also must step up to truly protect the monarch butterfly, its overwintering sites and breeding areas if that hope is to become reality.”

Western monarchs need everyone’s help today more than ever. To learn what you can do to help monarchs during this crucial time, read the Western Monarch Call to Action and the This Is How You Can Help fact sheet. The recommended actions will benefit monarchs and also support our many other native bees and butterflies.

Early count data is thanks to our many volunteers.


[Photo: Small clusters of monarchs at an overwintering site in Ventura County. (Credit: Lara Drizd, US Fish and Wildlife Service.)]


About the Xerces Society

The Xerces Society for Invertebrate Conservation is a nonprofit organization that protects the natural world by conserving invertebrates and their habitat. Established in 1971, the Society is a trusted source for science-based information and advice and plays a leading role in protecting pollinators and many other invertebrates. Our team draws together experts from the fields of habitat restoration, entomology, plant ecology, education, pesticides, farming and conservation biology with a single passion: Protecting the life that sustains us.
https://xerces.org/
Add Your Comments
Support Independent Media
We are 100% volunteer and depend on your participation to sustain our efforts!