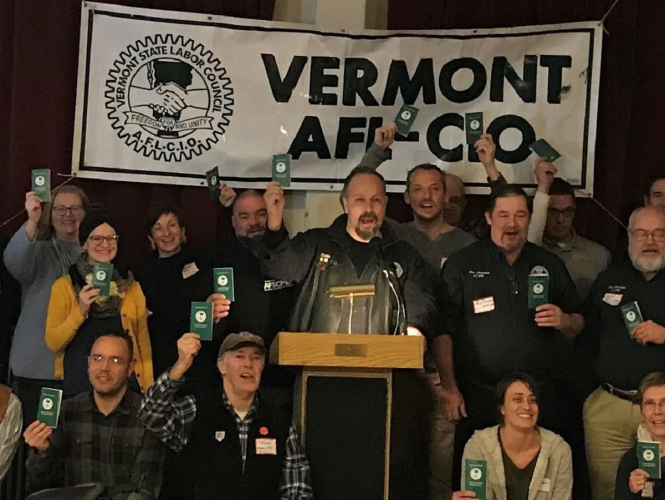 The threatened coup by Trump has been answered by the Vermont AFL-CIO at their state convention on 11/21/20.

They passed a resolution that if Trump attempts a coup they will authorize their leadership to call a general strike in Vermont.

Pacifica reporter Steve Zeltzer interviews Vermont AFL-CIO president Dave Van Deusen about the reasons for this call,
the state of labor and how labor can transform itself to confront not only the possible coup, pandemic, racist terrorism and depression conditions developing throughout the United States.

It has come to my attention that the Vermont State Labor Council intends to debate a General Strike Authorization Vote at your upcoming convention. Per Rule 19 of the Rules Governing AFL-CIO State Central Bodies, “No state central body shall have the authority or power to order any local union or other organization to strike or take a strike vote.” Therefore, the Vermont State Labor Council may not hold a vote to

authorize any strike and thus any debate is not germane at your convention.

Additionally, the Vermont State Labor Council requires that there be 60-days’ notice of the convention. If such timely notice was not sent, the proceedings of the convention are subject to protest. Further, only duly accredited delegates should be voting on any resolutions or amendments. Amendments to your constitution require a 2/3rds vote of the delegates and must be approved by the President of the AFL-CIO before they may take effect.

Pursuant to the ongoing monitorship of the Vermont State Labor Council, I have

asked our monitor, Dan Justice, to follow up with you to ensure that your upcoming constitution is conducted in accordance with your constitution, the Rules Governing, and the constitution of the AFL-CIO.

sustain and build the labor movement in Vermont.

https://youtu.be/CRfle7zUGNI
Add Your Comments
Support Independent Media
We are 100% volunteer and depend on your participation to sustain our efforts!