Fighting State Murder: Racism, the Police, and the Death Penalty 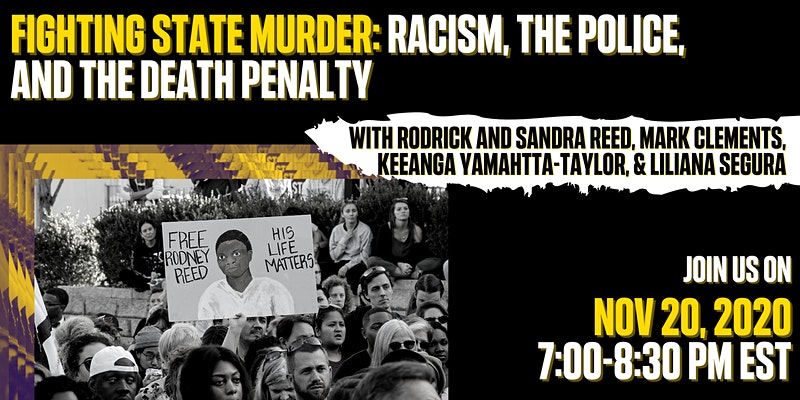 The massive uprising this year against police brutality and murder has sharply illuminated the racism of not only the police, but also the institutions that protect them. This struggle has thrown into sharp relief questions about the true nature of cops, the courts and prisons. The Black Lives Matter movement has given new life to movements for prison abolition, criminal justice reform and the abolition of the death penalty.

The connection between these struggles is clear: the fight against racism. The same system that allows police to murder unarmed people of color in the streets is the system that incarcerates, tortures and murders people behind the walls.

***Register through Eventbrite to receive a link to the video conference on the day of the event. This event will also be recorded and have live captioning.***

Rodrick Reed is Rodney Reed’s younger brother. Rodrick and his family have been fighting to prove Rodney’s innocence and to free him for decades. Rodrick is the Vice President of Reed Justice Initiative. The idea for Reed Justice Initiative was born out of a series of conversations between Rodrick and Rodney, during which Rodney encouraged Rodrick to establish a collaborative to advocate for Rodney and people in similar situations to Rodney.

Sandra Reed is the mother of Texas death row prisoner Rodney Reed. In the 23 years since her son was wrongly convicted, she has been a tireless advocate for justice for Rodney. Sandra served on the board of the Campaign to End the Death Penalty (CEDP) for many years. Following the folding of the CEDP, Sandra and her family founded the Reed Justice Initiative (RJI) to continue campaigning for Rodney and against the death penalty. Sandra currently serves as President of the RJI.

Mark Clements is a Chicago police torture survivor. At age 16 in 1981 he was taken to area 3 violent crime unit where he was tortured to confess to a crime. Mark was one of Illinois first juvenile’s sentence to natural life without parole in the state of Illinois. He remained incarcerated for 28 years before his conviction was overturned in 2009. In 2009 he was hired as administrator and organizer with the Campaign to End the Death Penalty and later served as a Board member with CEDP. Mark also helped establish the Illinois Fair Sentence of Youth through Northwestern University of School of Law, while sitting on the board of the Chicago Alliance Against Racist and Political Repression. Mark works with the Chicago Torture Justice Center as a learning fellow working in many complex areas of trauma and while attending court hearings and in support of others that were taken to police stations across the city of Chicago and tortured by members of the Chicago Police Department.

Keeanga-Yamahtta Taylor writes and speaks on Black politics, social movements, and racial inequality in the United States. She is author of From #BlackLivesMatter to Black Liberation, which won the Lannan Cultural Freedom Award for an Especially Notable Book in 2016. She is also editor of How We Get Free: Black Feminism and the Combahee River Collective, which won the Lambda Literary Award for LGBQT nonfiction in 2018. Her third book, Race for Profit: How Banks and the Real Estate Industry Undermined Black Homeownership, published in 2019 by University of North Carolina Press, was a finalist for a National Book Award for nonfiction, and a finalist for the Pulitzer Prize for History.

Liliana Segura is an award-winning investigative journalist covering the U.S. criminal justice system, with a longtime focus on harsh sentencing, the death penalty, and wrongful convictions. While at The Intercept, Segura has received the Texas Gavel Award in 2016 and the 2017 Innocence Network Journalism Award for her investigations into convictions in Arizona and Ohio. She lives in Nashville, Tennessee.
_______________________________________________________________
Added to the calendar on Mon, Nov 16, 2020 10:30AM
Related Categories: U.S. | Police State & Prisons | Racial Justice
Add Your Comments
Support Independent Media
We are 100% volunteer and depend on your participation to sustain our efforts!