by KPFA Saturday Evening News/Ann Garrison
Venezuela's elections for its National Assembly are coming up in December. 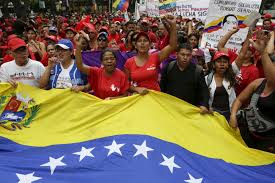 President Nicolas Maduro was elected two years ago, and Assembly members will be elected this year. Juan Guaidó, the President of the National Assembly, whom the United States tried to promote as Venezuela’s legitimate president even though he had never even run for president, is not running for Assembly again. This election takes place in the context of economic hardship caused by US sanctions, US seizure of Venezuela’s substantial oil infrastructure in the US, and the Bank of London’s seizure of its gold reserves. The US has already said it will not recognize the elections.

"Venezuela Analysis" editor Ricardo Vaz urged US supporters of Venezuela to oppose sanctions in Venezuela and elsewhere in the world and keep an eye on the elections and any dirty tricks the US might play to undermine them.
END_OF_DOCUMENT_TOKEN_TO_BE_REPLACED
§
by KPFA Saturday Evening News/Ann Garrison
Listen now:
Copy the code below to embed this audio into a web page:
Download Audio (2.8MB) | Embed Audio
END_OF_DOCUMENT_TOKEN_TO_BE_REPLACED
Add Your Comments
Support Independent Media
We are 100% volunteer and depend on your participation to sustain our efforts!