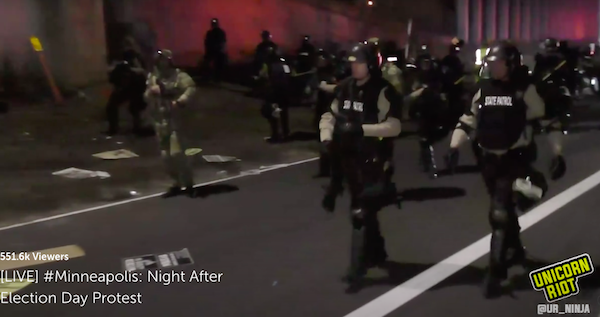 
MINNEAPOLIS—The Minnesota Chapter of the National Lawyers Guild (NLG-MN) stands in solidarity with the hundreds of demonstrators kettled and arbitrarily arrested last night on I-94. These protesters gathered to demand that all votes be counted—a fundamental tenet of a political system that claims to be democratic. At the direction of elected officials, law enforcement arrested over 600 people and cited many others, including four NLG Legal Observers (LOs) and half a dozen or more minors. At least one person was taken into custody, a young Black woman charged with assault of an officer, and is still in jail. NLG-MN unequivocally condemns these arrests and citations.

Leading up to the arrests and citations, law enforcement gave no orders to disperse. As people attempted to exit the freeway using access roads, they were not allowed to leave by officers and were then subject to pepper spray. The action was carried out by Minnesota State Troopers, Hennepin County sheriffs, and Minneapolis Police Department (MPD); there are unconfirmed reports that the National Guard was also present. A number of legislators and others have contacted Governor Tim Walz’s office, and have reported the governor’s remarks that last night’s law enforcement actions were intended to “teach a lesson.” After being cited, arrestees were put on buses and dropped off at random locations, including the University of Minnesota campus, U.S. Bank Stadium, Lake Harriet, Bloomington, and others. NLG-MN worked with local activists and jail support to organize car caravans to safely shuttle arrestees back to Minneapolis.

The arrests of NLG LOs and media, present to document the actions of law enforcement, add to the wrongful arrests and are an additional attempt to avoid accountability and documentation of law enforcement actions. One Latinx reporter with a press badge was arrested, while another officer threatened to call Border Patrol on his wife after demanding to see her passport. These tactics, like the others above, are deliberate attempts to create a chilling effect on protest and to scare activists. We are also concerned about the arrests of minors, at least five of whom have been charged with crimes related to being on the freeway. Our hotline received more than 250 phone calls seeking support around citations.

These actions by the MPD, and the overwhelming silence from elected officials, are a striking demonstration of why the MPD cannot be reformed; it must be dismantled. The community is well aware that our elected officials will continue to defend the police department at every opportunity, so it is up to us to continue advocating and agitating for genuine change. We will not stop until our community’s demands are met.

Folks looking for resources and guidance in handling these citations, which are criminal charges, should leave a voicemail on the NLG Minnesota hotline: (612) 444-2654

Due to our current call volume, we may not be able to answer all phone calls as they come in; however, we will follow up with resources as soon as possible. In addition, NLG Minnesota is participating in an All Arrestee Meeting along with Minnesota Uprising Arrestee Support for arrestees and their supporters to discuss solidarity and organizing strategy. The tentative date for the event is November 15.

The National Lawyers Guild, whose membership includes lawyers, legal workers, jailhouse lawyers, and law students, was formed in 1937 as the United States’ first racially-integrated bar association to advocate for the protection of constitutional, human and civil rights.
https://www.nlg.org/nlg-minnesota-condemns...
Add Your Comments
Support Independent Media
We are 100% volunteer and depend on your participation to sustain our efforts!