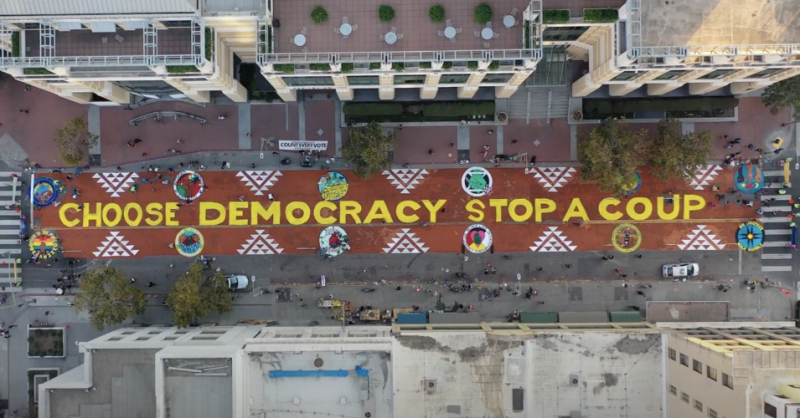 
Kimi Lee, leader with Bay Resistance co-organized [a giant] street mural [and] said, "We have to prepare ourselves to defend the election and democracy. We may not know results on Tuesday, and the election could get dragged out for weeks or months. November 3rd is not the end of our fight, it is just the beginning. This mural is a call to everyone that we need to choose to defend democracy and build the kind of world that we want together. Art and music are so important right now to give people energy and to bring us together. We hope that this mural inspires others to come out and join us."

Marge Grow Eppard, an indigenous (Miwok) organizer and leader, opened the mural with prayer, then painted the first brushstroke on the street with red clay paint. She said, “This is Ione clay from my people’s land up in Amador and Calaveras Counties.” The background of the mural was painted with this natural red clay paint from the foothills of the Sierra Mountains.

Kazu Haga, of East Point Peace Academy, the other event coorganizer, says, “People need to know that upholding democracy is not something we do once every four years. Especially in a time like this when democracy is being threatened, we need to be out there before and after Election Day to continue to put pressure on this administration, to let them know that we’re not going to simply let them steal this election. The more we can rise up and let our voices be heard leading into the election, the harder it will be on them to try and steal it.

Street murals are an amazing way to combine resistance work with creation work. It’s a direct action - we didn’t ask for permission to do this. But it’s also about putting our vision of what we want out there to the world. It’s a direct action that gets everyone - grandmas to children - directly involved, moving their bodies and creating with us. We’re not just sitting around listening to a speech. We’re all literally part of the movement.”

The Climate Justice Street Mural Project has been working with communities and movements in the San Francisco Bay Area for the last eight years to teach how and to help paint giant street murals with clay and non-toxic tempera paints, including as part of last year’s climate strike. Kicked off by the Washington, D.C. giant “Black Lives Matter” street mural words painted in June 2020 directly in front of the white house by DC Mayor Muriel Bowser, people in cities all over the US and Canada have painted, and innovated their own Black Lives Matter murals.
https://www.commondreams.org/views/2020/11...
Add Your Comments
Support Independent Media
We are 100% volunteer and depend on your participation to sustain our efforts!