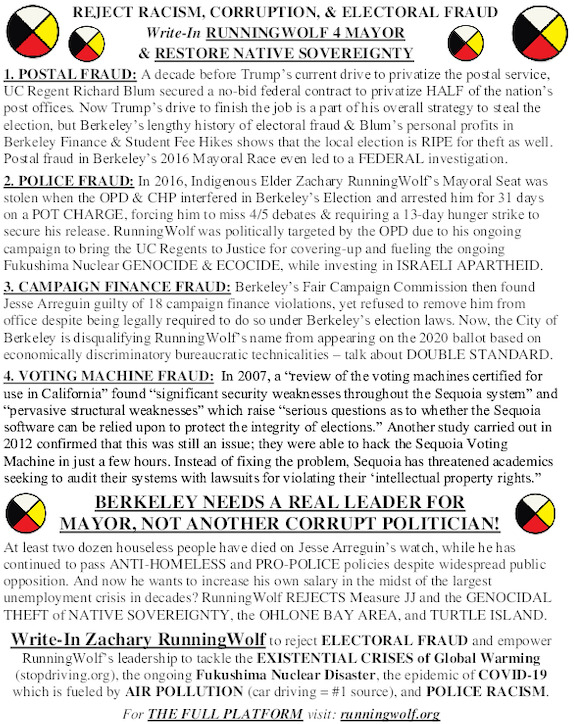 In 2016, the Oakland Police Department arrested Indigenous Elder and Berkeley Mayoral Candidate Zachary RunningWolf for protesting in solidarity with the largest strike against prison slavery in history, holding him in Santa Rita for "vandalism" and a pot charge for 31 days. OPD's election interference forced RunningWolf to miss 4/5 of Berkeley's Mayoral Debates, and undertake a 13-day hunger strike to secure his release when the charges were dropped - but the FRAUD was already done.[4]

RunningWolf's 2016 + 2020 Election Platforms directly threaten the Oakland Police Department due to his support for defunding the police and ending the BPD's cooperation agreement with OPD, as well as advocating to bring the 30 OPD officers accused of pedophilia and sex trafficking to justice which the department is COVERING UP.[5][6]

In 2020, for ​the second time in a row, the OPD arrested Zachary RunningWolf as a political prisoner and OPD's charges are being used to hold him in prison until AFTER the ELECTION. Because he cannot afford bail, he is being assumed "GUILTY until proven INNOCENT" - violating Berkeley's election laws forbidding discrimination by economic class. Not to mention Santa Rita Jail's numerous civil rights violations including PRISON SLAVERY.[7][8][9][10]

The Orwellian absurdity of Oakland's greatest perpetrator of hate crimes - the notoriously racist OPD [11][12][13] - arresting and charging an Indigenous Elder for the same - is only compounded by the fact that fake mayor of Berkeley Jesse Arreguin was found GUILTY in 2018 of 18 campaign finance violations, yet faced no arrest, incarceration, or resignation charges despite the legal mandate under Berkeley's Election Laws to dismiss him (BERA 2.12.470).[14]

On October 20, Indigenous Elder Zachary RunningWolf was arrested by OPD shortly before distributing the latest flier (attached here) for his write-in Berkeley mayoral campaign, which detailed 4 types of election fraud facing the city and nation and implicated UC Regent Richard Blum in initiating the postal privatization scheme Trump has accelerated to undermine the 2020 Election.

More broadly, Elder RunningWolf is campaigning to establish Indigenous Sovereignty in the Bay Area for full decolonization, redistribution of wealth to meet all basic needs and effect a speedy and just transition to solve the climate crisis, and replace police and prisons with INDIGENOUS forms of governance. His 2016 plan of phasing out cars for free bicycle lending libraries and reopening small business vendors on the streets is now more ESSENTIAL than ever during COVID-19.

The UC Regents are guilty of colluding with developers to defraud students and residents with rising rent and hiding $175 million in UC Slush Fund Accounts while raising fees.[18]

And FINALLY Elder RunningWolf promises to bring the UC Regents to Justice for the ongoing Fukushima Nuclear genocide and ecocide, which numerous whistleblowers and respected nuclear institutions have confirmed despite the central role played by the UC Nuclear Labs in the ongoing coverup. Even the Nordic NUCLEAR INDUSTRY warns pacific radiation will kill more than 1 million people from eating radioactive seafood. [19]

NO MORE POLICE FASCISM, NO MORE PRISON SLAVERY, NO MORE FAKE DEMOCRACY, NO MORE COLONIALISM. END THE 500+ YEAR ONGOING 99% GENOCIDE OF NATIVE PEOPLES BY THE UNITED SNAKES OF AMERIKKKA.

THIS IS TURTLE ISLAND. THIS IS THE OHLONE BAY AREA. RESPECT INDIGENOUS SOVEREIGNTY AND NATURAL LAW - ALL LIFE ON EARTH HANGS IN THE BALANCE.

And if you're living in Berkeley, WRITE-IN Zachary RunningWolf for mayor because its TIME for INDIGENOUS SOVEREIGNTY.