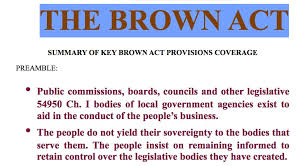 Harry Bernstein, CCSF Faculty Member
City College failed to support its claims. It failed to use best practices for public meetings during the pandemic, and the Trustees admitted they were violating the law in handling public comments at their meetings, agreed to fix the problem in January but then, after only three months, went back to their old ways.

At a press conference, Higher Education Action Team (HEAT) and the CCSF Collective unveiled a Report Card on the role of the San Francisco City College Board of Trustees, giving the Trustees a failing grade for destroying classes, eliminating campuses and privatizing the Community College for "developers, consultants and lawyers who are making millions."

The Report Card cited the following areas of failure:

• Ethnic Studies and Destruction of Ethnic and Community Studies

• Privatization and the Balboa Reservoir [Project]

• Using the board as stepping stone to higher office.

Anyone who wants to attend a meeting of the City College Board of Trustees during the pandemic and make public comments will see this notice:
“Institutions across the country have been working to ensure public meetings can be conducted effectively and respectfully in virtual formats. To that end, state and national best practices have been developed regarding public comment. In line with these best practices, CCSF is requiring all requests for public comment be submitted [in writing] to publiccomment [at] ccsf.edu [or by phone to 669.444.1266] 30 minutes prior to the meeting start time.”

Shanell Williams
Board President
Shanell Williams
On September 11, I submitted a public records request to learn what the College based "best practices" on. I had already written to the chancellor’s chief-of-staff to find out about their research. They told me that “Board President Williams worked with staff and surveyed other districts and public agencies to establish the protocols, noted above.”

Dianna Gonzalez
Interem Chancellor
Dianna Gonzalez
So who was responsible for formulating the above statement (“Institutions across the country…”) and having it inserted in the agenda? That question actually was answered — one of the few. When the selection of Dianna Gonzales as the new interim chancellor was revealed on April l, ’20, she soon announced a town hall for April 7. The afternoon of the event, Rachel Howard of BergDavis Public Affairs, a CCSF consultant, was tasked with creating a statement on how to access that evening’s virtual session; it was 98% identical to the version still in use today. As for the numerous questions I raised about the best practices—when the survey was done, by whom and with which districts and public agencies, etc., they were either protected by lawyer-client privilege, disregarded, or exempt from disclosure for a plethora of reasons. In other words, it took a month to discover that the district wouldn’t or couldn’t back up its claims. More important, the “best practices” only referred to the way of reserving a place in line to deliver public comment. It turns out that other local districts have more generous policies, some not requiring advance notice to make a comment (West Valley-Mission) or giving more time to speak (five minutes at Foothill-De Anza), or being able to make one or more comments during the meeting.

quote marks
...in April, the new regime under Interim Chancellor Gonzalez abruptly, with a blatant lack of transparency and no justification, returned to the previous agenda structure, with very limited public comment and only near the beginning of the meeting — reservation is now required in advance as well.”

This leads to the more serious complaint about the District limiting the public’s opportunity to participate in Board meetings. The Board of Trustees held a retreat on January 9, before classes began this year. Guy Bryant, a lawyer from AALRR, gave a presentation on the Brown Act and open meeting procedures, as well as other legal issues.

That morning, Trustee Davila spoke of a time when “we had it all the way through”—meaning that public comment had been allowed at a number of places throughout their meetings. You can see this from Board agendas and minutes going back to the early months of 2017. She explained some reasons the Board decided to put all the public comment at the beginning of the meeting — greater convenience, minimizing late-night sessions, allowing greater diversity of speakers. Then she wanted to know if that had been a violation of Education Code? The lawyer was not shy in setting her straight.

Violation of Ed. Code, § 72121.5
“I would say that the best practice would be to change it to have it [public comment] as the items come up.” (He said it about three times in the next five minutes.)

Bryant: “I would say the best practice is, would be to, if you can—obviously, again it’s your meeting and you’re trying to make sure that you’re getting your business done and if there’s a whole lot of things—but the Ed. Code is pretty clear that it wants you to, if you can, allow for the public to speak when the item is taken up.”

He was even more emphatic when pointing out that this is a provision of the Education Code, which applies particularly to Community Colleges:

“[There’s a similar provision that was] general for other public entities, but Community Colleges section 72121.5* is specific to you guys. And so that’s why [it’s a] best practice that ‘Community College Districts and their subsidiary bodies must allow speakers to be heard as agenda items are taken up.’ ” (*Ed. Code, § 72121.5)

And fix it they did. During the first three months of 2020, Board agendas showed that public comments were allowed on action items, reports, consent items and closed session agendas, as well as for items not on the agenda. Yes, there were time limits, but suddenly fuller participation was possible. And even after shelter-in-place regulations were in effect, the same agenda structure persisted in March. But in April, the new regime under Interim Chancellor Gonzalez abruptly, with a blatant lack of transparency and no justification, returned to the previous agenda structure, with very limited public comment and only near the beginning of the meeting — reservation is now required in advance as well. (For months, one could not even read one’s own comment.) The Zoom technology makes for a different experience, too. The Trustees, their thoughts inscrutable, are hidden from view during comments, replaced by a digital clock counting down. The Trustees also seem less accountable than when faculty and students were there in person to observe, and respond. Yet old battles and controversies are not forgotten.

The Trustees in January made it clear that they valued most participants other than those who regularly showed up and were the best informed — City College employees. It’s time to open up the meetings and let those who still observe these lengthy gatherings participate more fully. Follow the Ed. Code and the Brown Act. Be transparent; return to best practices at Board meetings.

According to the REPORT CARD: The Trustees restricted public comments at meetings and violated transparency regulations for public agencies. 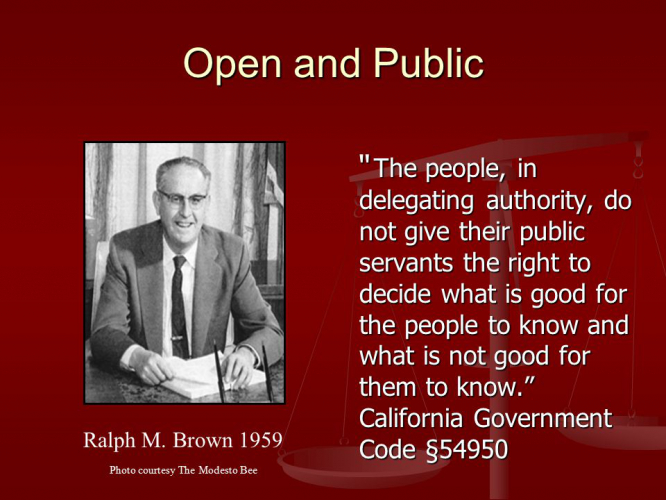 original image (960x720)
The Brown Act was to protect the public from fiancial conflicts of interest, corruption and improper activites. SF City College Board of Trustees Shanell Williams has fragrantly violated the rules and illegally gave former Chancellor Mark Rocha over $400,000 after he helped destroy the community college. The transfer of this money was done improperly without the right of the community and public to make comments. Shanell with the support of the rest of current board covered up the payment.
https://westsideobserver.com/news/citycoll...
§Brown Act Basics
by Repost
Friday Oct 30th, 2020 11:00 PM 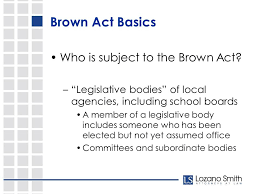 The San Francisco Community College Board of Trustees including Board president Shanell Williams got training on how to abide by the Brown Act rules and then blatantly violated these procedures. Their contempt for the Brown Act is evidence of malfeasance and also part of their role in covering up the growing corruption scandal at SF City College. Millions have disappeared with no effort to explain where these funds went. The recent approval of $845 million bond for rebuilding and refurbishing the campuses is in jeopardy of being misused and subject to corrupt dealings by the board of Trustees.
https://westsideobserver.com/news/citycoll...
Add Your Comments
LATEST COMMENTS ABOUT THIS ARTICLE
Listed below are the latest comments about this post.
These comments are submitted anonymously by website visitors.