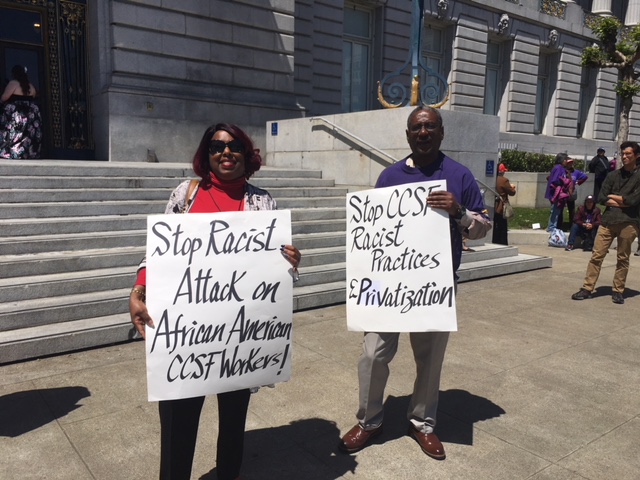 
A medical tent next to the Southeast Health Center in Bayview in April. One plantiff in the suit says she was assigned to screen patients on the sidewalk but was not given a mask for protection against COVID-19.Photo: Gabrielle Lurie / The Chronicle
Attorney Angela Alioto filed a workplace discrimination suit against the San Francisco Department of Public Health.Photo: Scott Strazzante / The Chronicle
San Francisco has been hit with another workplace race discrimination suit, this one by eight Black female employees of the Department of Public Health who said they were wrongly denied training and promotions granted to their co-workers and were subjected to a “hostile working environment.”
The suit, filed Tuesday in federal court, quoted the city’s own findings in the latest annual workforce report by the city Department of Human Resources and the Office of Racial Equity: Compared to employees of other races, San Francisco’s African American municipal employees “have lower-paying jobs, are less likely to be promoted, and are disciplined and fired more frequently.”
The eight plaintiffs, who have a combined 199 years of experience in city employment, have lost job opportunities and pay because of discrimination, and in one case faced health dangers, the suit claims.
On March 31, after the start of the coronavirus pandemic, Cheryl Thornton, a longtime department clerk, was ordered along with other Black employees to screen patients on the sidewalk outside the Southeast Health Center in Bayview-Hunters Point, and was given masks for patients but not for her and her co-workers.
Alameda County judge reprimanded for treatment of witness, lawyer
One patient sneezed on Thornton, and she went home, the suit said. She later tested negative for the coronavirus.
State health officials later told San Francisco to improve conditions at the clinic, but Thornton was transferred by her supervisor in response to her complaint and is no longer able to earn overtime, the suit said. It was filed by attorney Angela Alioto, a former city supervisor.
In response, John Coté, spokesman for City Attorney Dennis Herrera, said, “The city works diligently to prevent discrimination in the workplace and is keenly focused on racial equity.” He declined to comment on the allegations in the lawsuit.
For a city that prides itself on diversity and inclusiveness, San Francisco has faced multiple complaints of discrimination in employment.
A lawsuit by minority and female police officers in 1973 led to an agreement six years later requiring the Police Department to hire minorities as half of its new officers, and women as more than one-fifth. The city’s Fire Department settled a discrimination suit by the federal government in 1988 by agreeing to hire more minorities and women, a requirement that stayed in effect until 1997 when a federal judge found the city in compliance.
More recently, the city was sued in July by a former city firefighter and another former Fire Department employee, and in August by two Sheriff’s Department clerks, all claiming racial discrimination, harassment and retaliation.
One plaintiff in Tuesday’s suit is Kim Lynch, a licensed drug abuse counselor at the Department of Public Health’s Tenderloin Clinic. She said she was the only Black care provider at the clinic and, unlike her coworkers, was not allowed to work from home during the COVID-19 pandemic. She also said she found six cases in 2018-19 in which Black patients were denied services for no legitimate reason.
Another plaintiff, Jo-Theresa Elias-Jackson, a systems analyst, said she went on disability leave after her bosses berated her and threatened to cut off her salary. When she returned, she said, a supervisor accused her of being absent without leave and insubordinate, a later supervisor nicknamed her “Ms. Nasty,” and she was denied training that could have led to a promotion.
Plaintiff Donna James, a medical assistant since 2003 with a master’s degree in social work, said she was denied training as a social worker and applied for social work positions 20 times, but was denied because she lacked experience, while white applicants with similar resumes were hired.
The Department of Public Health, the suit said, maintains a “toxic workplace culture in which discrimination, harassment, and retaliation have become unlawfully commonplace.”
Bob Egelko is a San Francisco Chronicle staff writer. Email: begelko [at] sfchronicle.com Twitter: @BobEgelko

At a hearing of the San Francisco Civil Service Commission on December 17, 2918, the issue of racism, outsourcing and retaliation came to the fore. The Commission which is charged with making sure that the Human Resources Department carries out its work has allowed HR Director Micki Callahan to retaliate against whistleblowers.

https://youtu.be/rVZ7zyc4gjY
Add Your Comments
§Please
by gimme a break
Tuesday Oct 27th, 2020 6:01 PM
City& county of San Francisco has work classifications in order to become permanent, you need to take a test . if you don't take the classification test , and not pass it , you cant become permanent, what does that have to do with race?
take the test like everybody else ( all 2908, that have been trying for years to also promote fairly) if you pass thats great you have a shot for an interview if you score high enough... fair and square...
Add a Comment
Support Independent Media
We are 100% volunteer and depend on your participation to sustain our efforts!