"Surviving Autocracy": Jounalist Masha Gessen on the Destruction of America Under Trump 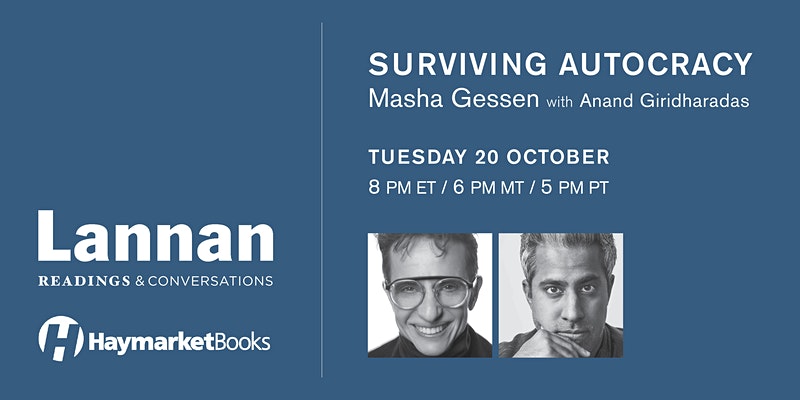 Written after the 2016 US presidential election, and drawing on what they had seen happen under Vladimir Putin, Gessen's Surviving Autocracy is an analysis of the destruction the Trump administration has waged on our institutions, and our very sense of identity, and sketches out a dark vision of a nation in which a fragile democracy can quickly erode into one-man rule.

In advance of the 2020 election, they continue to sound the alarm over the "creeping normalization" of this administration's efforts to tamp down press access. With an analysis that, "the Democratic Party lies in ruins, and the Republican Party lies prostrate,” Gessen predicts that the threat of autocracy will remain no matter who is elected, given the deterioration of the US’s political culture: "If Trump disappears tomorrow, we're actually looking at a vastly changed political landscape and a real crisis in American democracy."

***Register through Eventbrite to receive a link to the video conference on the day of the event. This event will also be recorded and have live captioning.***

Masha Gessen
Masha Gessen is the author of eleven books and a staff writer for the New Yorker. In addition to Surviving Autocracy (2020), their recent books include The Future Is History: How Totalitarianism Reclaimed Russia (2017), which won the National Book Award for Nonfiction; The Brothers: The Road to an American Tragedy (2015), about the Boston Marathon bombers; and The Man without a Face: The Unlikely Rise of Vladimir Putin (2012). Gessen has written extensively about Russia, autocracy, LGBT rights, Vladimir Putin, and Donald Trump, among others, and, on a parallel track, has been a science journalist, writing about AIDS, medical genetics, and mathematics; famously, they were dismissed as editor of the Russian popular-science magazine Vokrug Sveta for refusing to send a reporter to observe Putin hang-gliding with the Siberian cranes. Gessen is a Distinguished Writer in Residence at Bard College and the recipient of Guggenheim, Andrew Carnegie, and Nieman Fellowships, as well as the Hitchens Prize and the Overseas Press Club Award for Best Commentary. After more than twenty years as a journalist and editor in Moscow, they have been living in New York since 2013.

Anand Giridharadas
Anand Giridharadas is an editor-at-large for TIME, an on-air political analyst for MSNBC, and a visiting scholar at New York University. He is the author of Winners Take All: The Elite Charade of Changing the World; The True American: Murder and Mercy in Texas, about a Muslim immigrant's campaign to spare from Death Row the white supremacist who tried to kill him; and India Calling: An Intimate Portrait of a Nation's Remaking.
____________________________________________________________
Added to the calendar on Mon, Oct 19, 2020 9:28AM
Related Categories: U.S. | Government & Elections
Add Your Comments
Support Independent Media
We are 100% volunteer and depend on your participation to sustain our efforts!