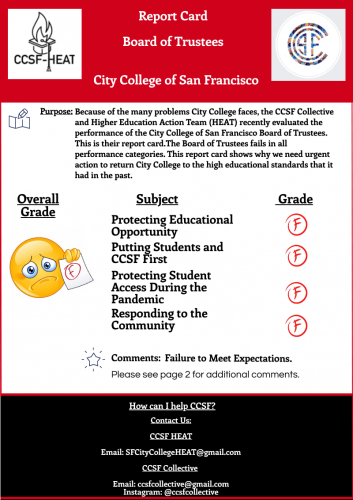 Two City College of San Francisco organizations, The Higher Education Action Team (HEAT) made up of faculty and concerned community members, and the student organization, the CCSF Collective, have collaborated to put out a report card on CCSF’s Board of Trustees. Please share it with people you know who live in San Francisco and who are voters.

The two-page report card should be part of this email. To make it bigger, click on it and enlarge it. It is also attached.

These four candidates also did not participate in a candidates’ forum organized by students. Williams responded to the forum invitation and declined to participate because she had a Democratic Party meeting scheduled at the same time. The other three did not even bother responding to the invitation.

Both incumbents, Williams and Temprano, were not endorsed by CCSF’s faculty union, AFT 2121.

The incumbents have a terrible record as board members and will hopefully be defeated. Most importantly, they have gone along with the massive number of class cuts. They voted to hire Rocha as chancellor over the objections, based on his record, of many faculty and community members. They voted to close CCSF’s Fort Mason campus to save money. That action may end up increasing the college’s budget deficit due to the loss of state funding for it. They did not publicly advocate for funding from the city to restore some 300 classes suddenly cut from the Spring 2020 last November by then CCSF Chancellor Rocha. Rocha emailed San Francisco’s mayor and supervisors discouraging this funding. The funding received a favorable vote from 7 of 11 supervisors. However, the mayor vetoed the measure. One supervisor opposing the funding was former CCSF Trustee Mandelman for whom incumbent Temprano works as his chief of staff.

Four candidates will be elected. If you are a San Francisco resident, I hope you vote for Anita Martinez who strikes me as the strongest and most knowledgeable of all of the candidates.

Again, please take the time to share the report card with people you know and encourage them to do the same thing.

As a college professor and former senior university administrator, I wholeheartedly agree with your report card grades and support your endeavor to elect better leadership for the Community College Board. The current Trustees have failed our community with year-after-year of poor fiscal management, the politization of an education board, and the privatization of our college. Their egregious choices have now bankrupted City College, placed our accreditation at-risk (again), and caused for the unnecessary suffering of thousands of students, and that was all prior to the COVID-19 pandemic. Count on me to make the right decisions and never repeat their mistakes.
-Victor Olivieri
________________________

Protecting educational opportunity and student access during the pandemic, putting students first, and responding to the community are critical components in ensuring that City College of San Francisco is thriving. Unfortunately, the Board of Trustees has failed to successfully execute and address these critical components for our college community. Although the Board of Trustees has brought in some resources to the college, such as securing Free City and the facilities bond, new leadership on the Board is needed to ensure greater transparency and accountability, along with an unwavering commitment to finding community-oriented solutions.
-Aliya Chisti
________________________

Your report card rating the performance of the CCSF Board of Trustees identifies specific issues under each category that I have addressed in a variety of public formats including endorsement interviews, community meetings, Board meetings, and press conferences. These issues resonate with San Franciscans who raise them if I have not had the opportunity to raise them myself.
I am running because I hope to be a member of a Board of Trustees that will address the issues. Perhaps working together we can raise our grade point average to at least satisfactory while we aim for an A.
-Anita Martinez
_________________________

I agree that on all important metrics current City College Trustees earn an “F.” But this is not surprising. The outcome (a failing institution) is perfectly correlated to the input (a Board of politicians lacking relevant experience). I will bring A+ expertise, independence and 22+ years of Board experience to CCSF, ensuring it survives and thrives. I will work tirelessly to ensure that the CCSF Board hires a permanent chancellor, balances the budget (not just with fiscal discipline, but with creative revenue-generating opportunities), opens the lines of communication with students and faculty, and commits to operating with transparency.
-Marie Hurabiell
________________________

The report card shows the many ways in which the Board has neglected the people that elected them. I am running because the last-minute cuts harmed thousands of teachers and students — my classmates — and yet the Board made these changes with no warning, limited ability of the public to comment, and zero accountability. We all know there will be hard decisions ahead: the budget is in bad shape, and enrollment and funding are falling. But I will pledge, as Trustee, to listen to stakeholders, be transparent about the Board's plans, and be a responsible steward of City College.
-Jeanette Quick 𣁽婕安
___________________________

Reading the Trustees Report Card was distressing. As a Candidate for CCSF Board and an ally to the CCSF Collective and HEAT, I take this evaluation seriously.

The Board has failed to put students first. Trustees must value students and faculty. The current Board’s inability to represent students who depend on CCSF and ensure their success risks the institution’s accreditation.

The challenges of solving CCSF’s systemic issues are daunting but not impossible. Action is required. Returning City College to the high academic standards needed to serve its students, faculty, and communities should be the priority of any CCSF Board Candidate.
-Geramye Teeter
§Report Card On The Present CCSF Board of Trustees
by HEAT
Sunday Oct 18th, 2020 4:44 PM 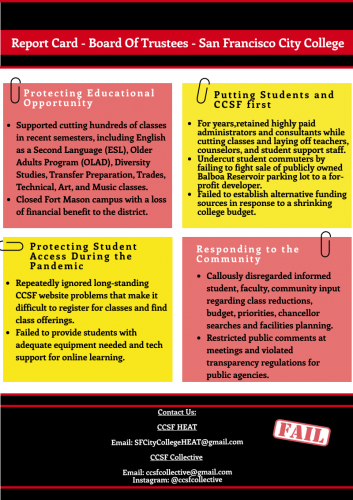 original image (800x1131)
This Report Card shows that the present Board Of Trustees have failed to protect the students, faculty and staff on the college and taking action to dismantle and destroy the community college.
Add Your Comments
LATEST COMMENTS ABOUT THIS ARTICLE
Listed below are the latest comments about this post.
These comments are submitted anonymously by website visitors.