Add an Event
Newswire
Calendar
Features
Home
Donate
From the Open-Publishing Calendar
From the Open-Publishing Newswire
Indybay Feature
Related Categories: Santa Cruz Indymedia | Arts + Action | Government & Elections | Racial Justice
Manu Koenig and Trail Now PAC Apologize for Anti-Semitic Cartoons Featuring John Leopold
by Linda Pierce, Santa Cruz News Group
Saturday Oct 17th, 2020 9:06 PM
Manu Koenig, candidate for Santa Cruz County Supervisor in District 1, has apologized to the Jewish community following the public outcry over the publication of a series of cartoon caricatures considered to be anti-Semitic of his opponent incumbent Supervisor John Leopold, who is Jewish. In an email interview conducted on October 16, Manu Koenig stated: "I was so horrified to realize that the cartoon we had used in our campaign ad about the rail corridor could be considered anti-Semitic. That was not our intention but I now understand how it could be perceived that way given the catalogue of the artists' work. We have removed the ad from all social media and television advertising and will not use work from this cartoonist again. I offer my sincere apology to the Jewish community." Brian Peoples, the Director of Trail Now, a PAC filed with the County of Santa Cruz in support of Koenig and opposing Leopold for Supervisor, issued an apology statement on October 13, which acknowledged that Trail Now created the the cartoons and was responsible for much of their political content. 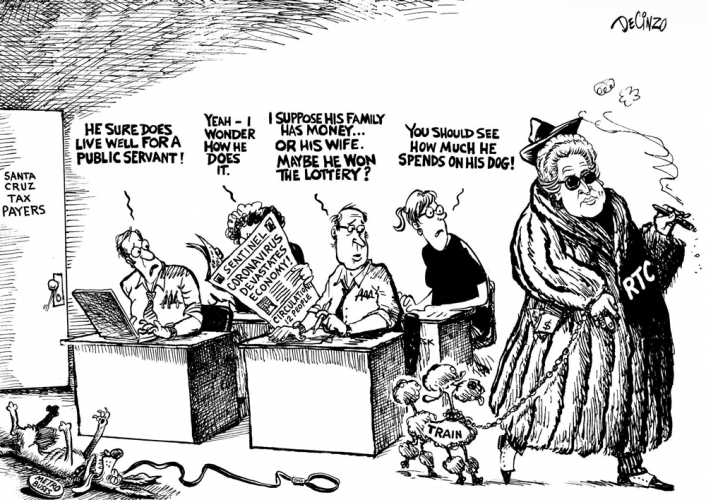 The cartoons all focus on one subject: the rail-trail. They were illustrated by cartoonist Steven DeCinzo and commissioned by Trail Now to oppose use of the rail system and the re-establishment of train service along the coastal trail in Santa Cruz County. It is not clear how many of the cartoons were used directly by Koenig's campaign. At least one of Koenig's television ads prominently features a DeCinzo rail-trail cartoon with Leopold in it (see video below).

One of the images that has generated particular outrage in the community shows Supervisor Leopold wearing a large, flamboyant fur coat (see photo above). In addition to wearing a business-style hat, and fancy shoes, Leopold's nose is also caricatured. Community members have compared the image to other racist and anti-Semitic images that have been created historically to disparage Jewish people, going back thousands of years. The caricature of Leopold's nose can be compared to the set of historical stereotypes collectively referred to as the Jewish nose. Another clear stereotype in the cartoon is that of the dishonest Jewish business person, who values money above all else.

In addition to Leopold, the cartoon also contains a cast of supporting characters who provide the following commentary about the Supervisor: "I suppose his family has money...or his wife. Maybe he won the lottery," "He sure does live well for a public servant," "Yeah - I wonder how he does it," and "You should see how much he spends on his dog." The statements play into the stereotype that Jewish people are financially "greedy," and the Anti-Defamation League (ADL) states that this stereotype seeks to communicate that Jewish people are underserving of their success. "Sometimes the accusation of Jewish greed comes from observations or assumptions about Jewish wealth, perceived as inherently undeserved," the ADL states.

The image of Leopold in the fur coat can be compared to other racist images from the past, such as a cartoon of a Jewish merchant published in 1927 in a mainstream family picture magazine from Finland called "Suomen kuvalehti" (see photo), or the illustrations from "Der Giftpilz," a racist German publication aimed at children that was widely distributed in 1938 (see photo), or in a cartoon created in 1973 by Vechernaya Moskva to discredit Jewish activists in Russia, implying they would betray their country for the love of money (see photo).

According to Brian Peoples, Trail Now paid for the cartoon series and there were, "over 30 Trail Now supporters collaborating on cartoon versions". Documents filed with the County of Santa Cruz over the summer indicate Trail Now paid $2800 dollars for "DeCinzo cartoons" (see photo and PDF file).

When interviewed through email, Manu Koenig stated that he has, "never been directly involved with Trail Now." Koenig once served as the Executive Director of Santa Cruz County Greenway, but did step down some time ago. Greenway is another organization that opposes the re-establishment of the rail system and the creation of the rail-trail.

Although Koenig has said he is not directly involved with Trail Now, the lines between that group and Santa Cruz County Greenway, as well as Koenig's campaign, become blurred at times. Apparently, Koenig and Peoples met together with Rabbi Shifra Weiss-Penzias of Temple Beth El in Aptos to discuss the anti-Semitic cartoons. Brian Peoples met with the Rabbi, according to Jack Brown, who is a longtime opponent of the rail system and advocate of electric automobiles. "Brian manned up and openly apologized for the cartoon after speaking to Rabbi Shifra Weiss-Penzias," Brown said about Peoples on social media. In a separate post, Peoples said he was accompanied by Koenig at the meeting. "Manu did the right thing and talk[ed] to [the] Rabbi," Peoples said.

The only public apology for the cartoons has been from Trail Now, on Facebook.

"It recently came to our attention that a few of the DeCinzo cartoons, created for the Santa Cruz Coastal Trail campaign, are construed by some Santa Cruz County residents to be anti-Semitic. If any of the cartoon illustrations gave any sense of discrimination toward any community member, it was unintentional and is unacceptable," the Trail Now apology reads in part.

Following the apology, Brian Peoples stated that Trail Now has removed some of the cartoons from their website. "The DeCinzo cartoons that are publicly available are not anti-Semitic," Peoples stated. "We removed the ones with anti-Semitic tropes."

"We are not working with DeCinzo right now," Peoples also said. "I do not see any reason to do more cartoons."

Some community members have stated that all of the DeCinzo cartoons should be removed from Trail Now's website and social media accounts. As of the publication of this article, ten of the cartoons remain on the Trail Now website, and countless remain on their Facebook page. 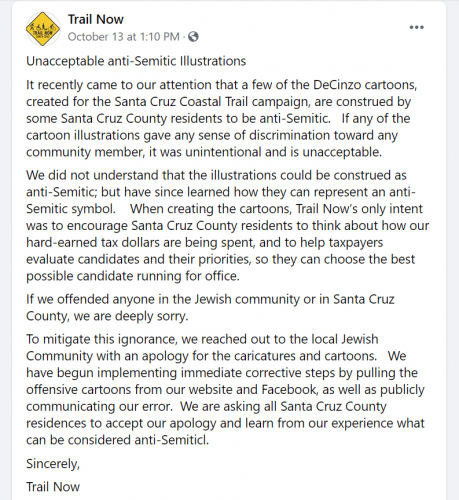 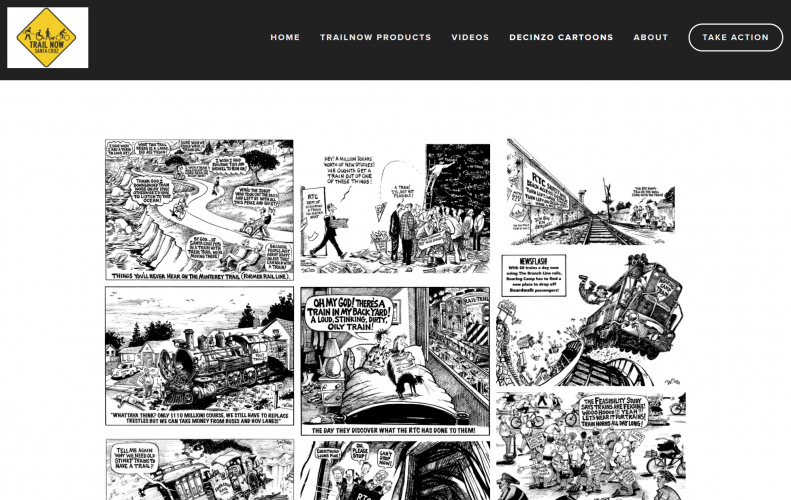 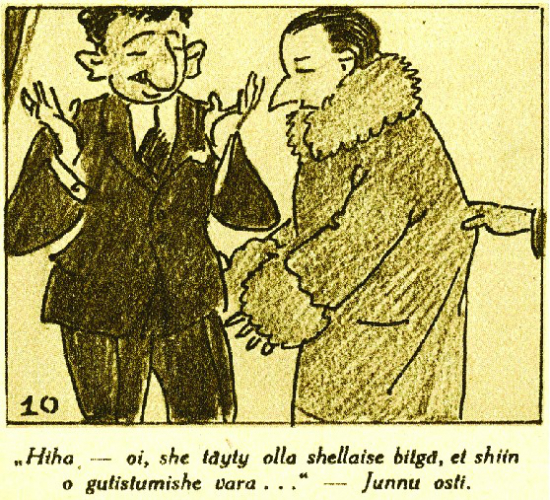 original image (558x507)
"A fragment of an antisemitic cartoon from a mainstream family picture magazine called Suomen kuvalehti in November 1927 in which a Junnu Kivanen is swindled by a Jewish merchant. The merchant's line is a parody of Jewish-Finnish. The text reads: '"The sleeve -it has to be long like that so that it can shrink . . ." -And Junnu bought it'. National Library of Finland." Source: https://www.researchgate.net/figure/A-fragment-of-an-antisemitic-cartoon-from-a-mainstream-family-picture-magazine-called_fig3_337678473
§From Der Giftpilz, 1938 (Germany)
by Linda Pierce, Santa Cruz News Group
Saturday Oct 17th, 2020 9:06 PM 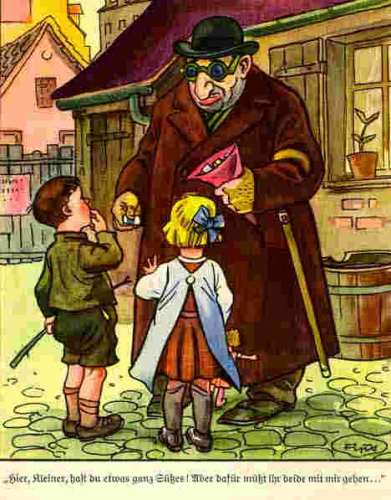 original image (468x597)
Translation: "The Experience of Hans and Else with a Strange Man: "Here, kids, I have some candy for you. But you both have to come with me..."" Source: https://www.jewishvirtuallibrary.org/der-giftpilz
§From Der Giftpilz, 1938 (Germany)
by Linda Pierce, Santa Cruz News Group
Saturday Oct 17th, 2020 9:06 PM 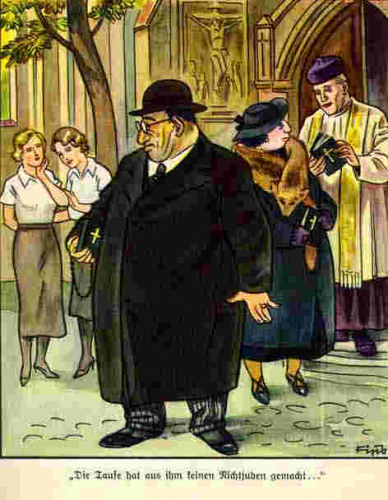 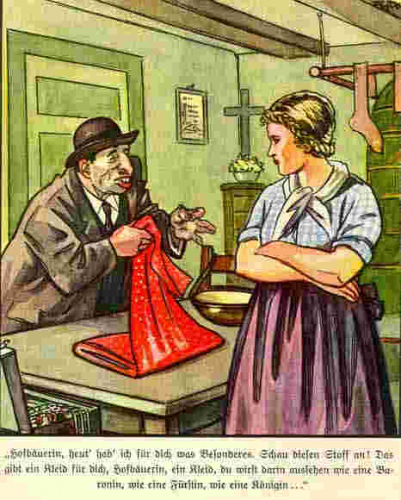 original image (466x580)
Translation: "How Jewish Traders Cheat: "Farming woman, have I got something special for you today. Look at this material! You can make a dress from it that will make you look like a baroness, like a countess, like a queen..."" Source: https://www.jewishvirtuallibrary.org/der-giftpilz
§The New Prayer, 1973 (Russia)
by Linda Pierce, Santa Cruz News Group
Saturday Oct 17th, 2020 9:06 PM 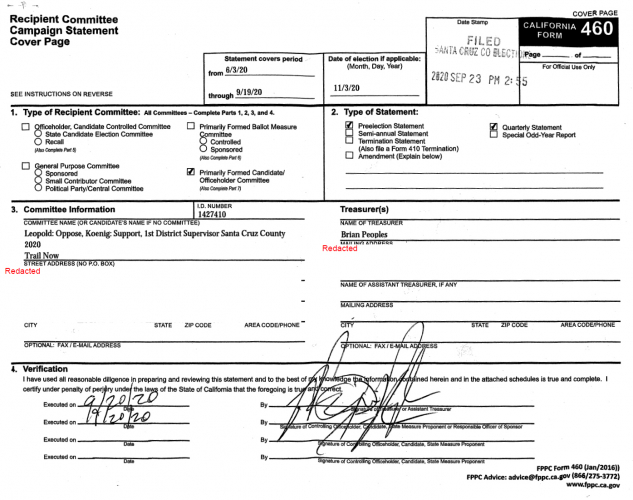 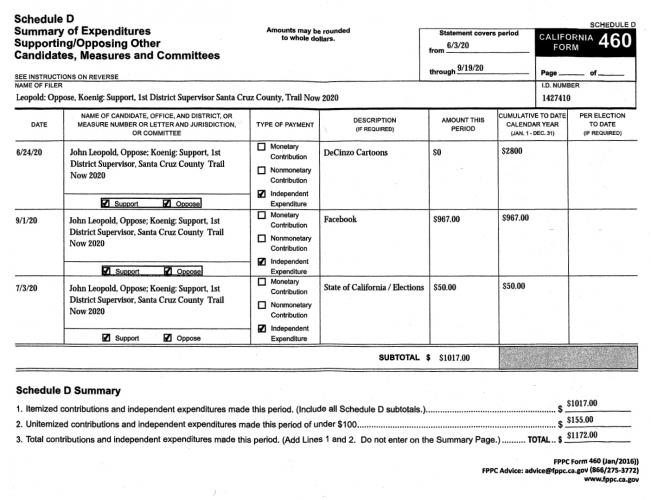 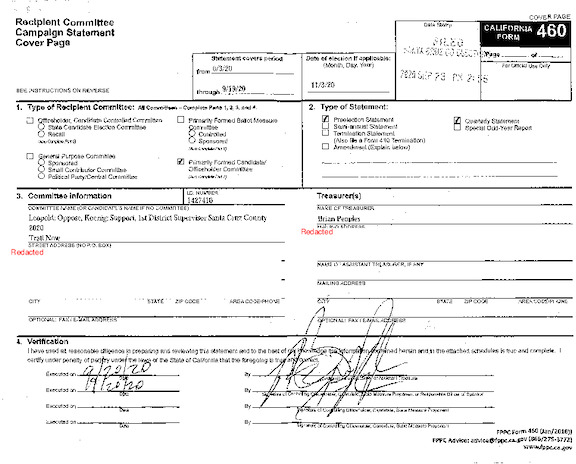 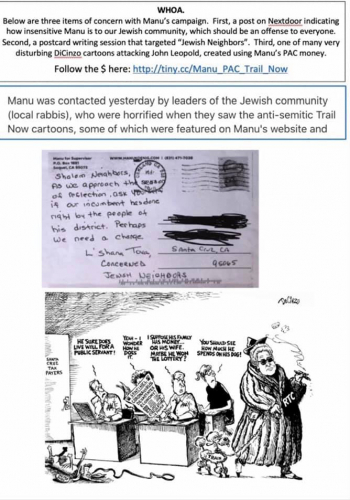 As we discussed on the phone, it recently came to my attention that the DeCinzo cartoons, created for the Santa Cruz Coastal Trail campaign, are construed by some Santa Cruz County residents to be anti-Semitic.

Let me begin by apologizing for the caricatures and cartoons. When creating the cartoons, Trail Now’s only intent was to encourage Santa Cruz County residents to think about how our hard-earned tax dollars are being spent, and to help taxpayers evaluate candidates and their priorities, so they can choose the best possible candidate running for office. If any of the cartoon illustrations gave any sense of racism toward any community member, it was unintentional and is unacceptable. We did not understand that the illustrations could be construed as anti-Semitic, but have since learned how they can represent an anti-Semitic symbol. If we offended anyone in the Jewish community or in Santa Cruz County, we are deeply sorry.

We have begun implementing immediate corrective steps to regain your confidence by pulling the cartoons from our website and Facebook, as well as publicly communicating our error.
Please pass my apology onto your entire Jewish community, and please let me know if there are additional steps that I can take to correct our mistake. 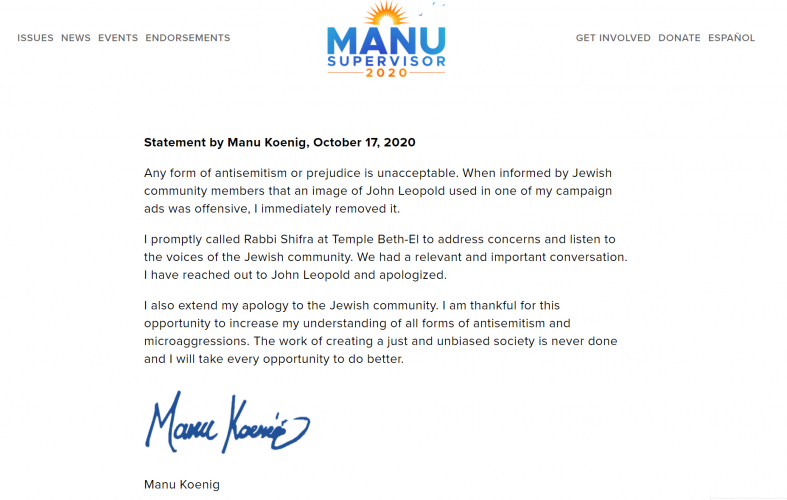 Any form of antisemitism or prejudice is unacceptable. When informed by Jewish community members that an image of John Leopold used in one of my campaign ads was offensive, I immediately removed it.

I promptly called Rabbi Shifra at Temple Beth-El to address concerns and listen to the voices of the Jewish community. We had a relevant and important conversation. I have reached out to John Leopold and apologized.

I also extend my apology to the Jewish community. I am thankful for this opportunity to increase my understanding of all forms of antisemitism and microaggressions. The work of creating a just and unbiased society is never done and I will take every opportunity to do better. 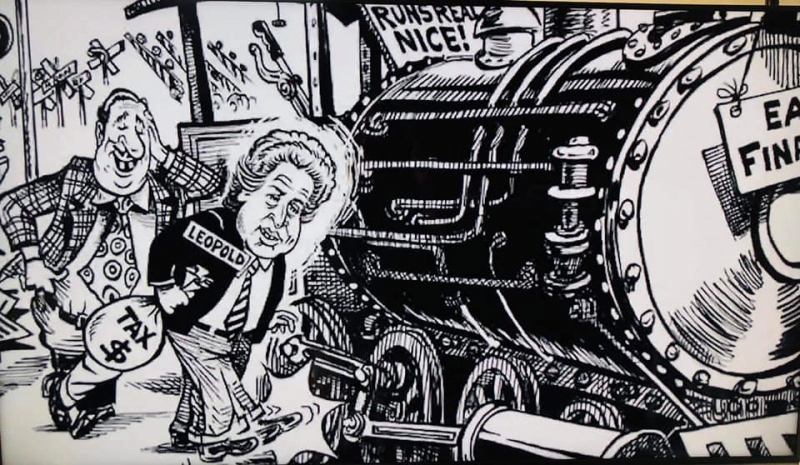 original image (960x558)
This is a screen capture of the depiction of Supervisor John Leopold in the cartoon used by Manu Koenig's campaign in one of his television advertisements (see video above).
§Cartoon also Published by the Santa Mierda Hate Blog
by Linda Pierce, Santa Cruz News Group
Monday Oct 19th, 2020 2:04 AM 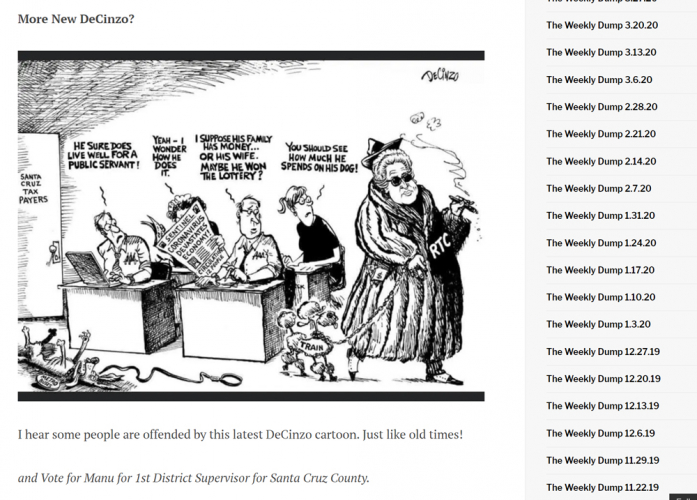 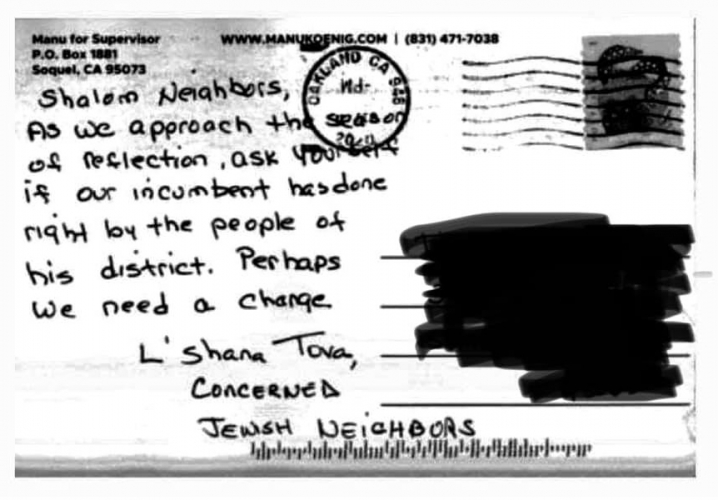 original image (862x600)
A postcard writing party targeting the Jewish Community was organized by supporters of Manu Koenig. Postcards with the Koenig Campaign's mailing address were filled out and sent to Jewish individuals.
§Personal Account from Someone who Received an Unsolicited Postcard from Koenig Campaign
by Linda Pierce, Santa Cruz News Group
Monday Oct 19th, 2020 2:25 AM 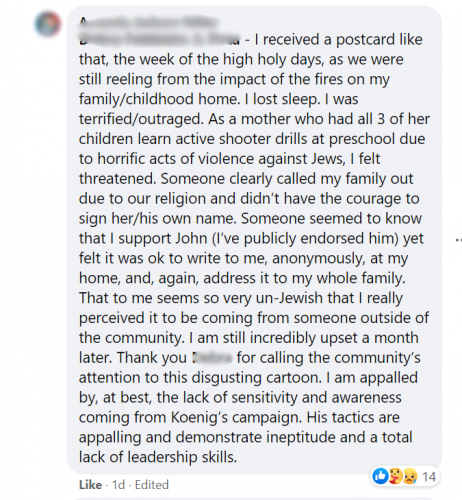 original image (675x729)
Personal account on social media from a member of the Jewish Community who received an unsolicited postcard from the Koenig campaign:

"I received a postcard like that, the week of the high holy days, as we were still reeling from the impact of the fires on my family/childhood home. I lost sleep. I was terrified/outraged. As a mother who had all 3 of her children learn active shooter drills at preschool due to horrific acts of violence against Jews, I felt threatened. Someone clearly called my family out due to our religion and didn’t have the courage to sign her/his own name. Someone seemed to know that I support John (I’ve publicly endorsed him) yet felt it was ok to write to me, anonymously, at my home, and, again, address it to my whole family. That to me seems so very un-Jewish that I really perceived it to be coming from someone outside of the community. I am still incredibly upset a month later. Thank you [name removed] for calling the community’s attention to this disgusting cartoon. I am appalled by, at best, the lack of sensitivity and awareness coming from Koenig’s campaign. His tactics are appalling and demonstrate ineptitude and a total lack of leadership skills."
Add Your Comments
LATEST COMMENTS ABOUT THIS ARTICLE
Listed below are the latest comments about this post.
These comments are submitted anonymously by website visitors.