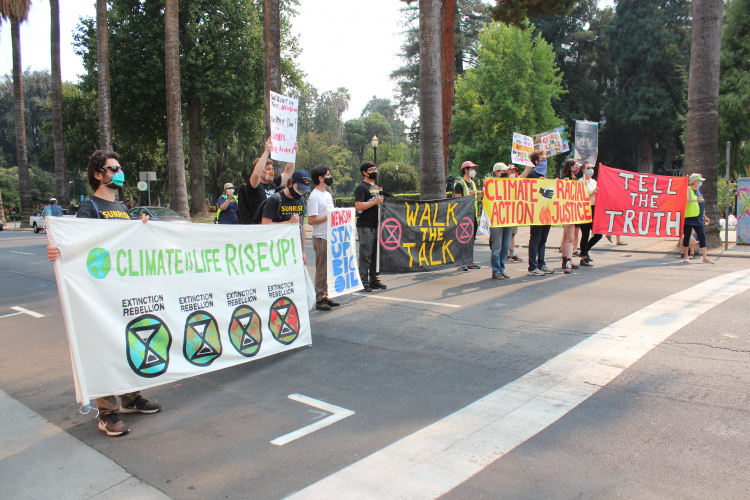 original image (5184x3456)
The Gavin Newsom Administration on the afternoon of October 16 issued a memo to environmental groups revealing that CalGEM, the oil and gas regulators in California, will be approving six fracking (well stimulation treatment) applications for Aera Energy in Belridge, California.

The agency approved the permits after an independent technical review by Lawrence Livermore National Laboratories, according to Matt Baker, Deputy Secretary for Energy of the California Natural Resources Agency.

The permits and assessments are available here: https://www.conservation.ca.gov/calgem/Pages/Well-Stim-National-Lab-Scientific-Review.aspx.

Baker also attached an update on actions underway by CalGEM as “part of the state’s efforts to align oil production policies with our broader climate change goals and mandates to protect human health and environment.”

Liza Tucker, Consumer Advocate for Consumer Watchdog, was appalled by the decision to grant more fracking permits at a time that record fires, record heat and and unprecedented pandemic have devastated California.

“It makes no sense to keep giving out fracking permits on every level,” said Tucker. “The oil well operators have not set aside nearly enough money to plug wells at the end of their useful lives. Fracking is a risky practice.”

“The oil companies have a whole bunch of debt coming due and are not in good financial shape, yet they are fracking more wells that threaten the environment that they can’t afford to plug up and clean up afterwards because they never put up the right amount of money to do this,” she stated. “One major oil producer in California, the California Resources Corporation, an Occidental Petroleum offshoot, is bankrupt financially, while all of the oil companies in California are environmentally bankrupt.”

“The oil companies were never required to set aside the amount of money that it really costs to plug the wells and then clean up their environmental mess so it is returned to the way it was before they drilled the wells,” she said.

Tucker also questioned a disparity in how much oil is actually produced by fracking.

"Gov. Newsom sacrifices our health, food, water and climate while dodging criticism when he issues new fracking permits on a Friday night,” said Alexandra Nagy, California Director of Food & Water Watch and Food & Water Action. “Newsom's concern over climate change is a deceptive mirage as his actions reveal a strong adherence to the status quo. Newsom keeps Californians on a path of worsened climate chaos by allowing fracking and oil drilling to ramp up. He needs to take responsibility for his hand in climate destruction and immediately reverse course. He needs to stop taking fossil fuel money and keep his promises to ban fracking and end dangerous drilling."

Since Newsom become Governor in January 2019, his regulators have approved a total of 7071 oil and gas drilling permits in California, according to Department of Conservation data analyzed by Consumer Watchdog and the FracTracker Alliance.

The permit numbers and locations are posted and updated on an interactive map at the website: NewsomWellWatch.com

The reason why the Newsom administration is approving increasing numbers of oil and gas permits at a time of record fires, record heat and a global pandemic is due to the uncomfortable fact that the oil industry is the most powerful corporate lobby in California and exercises enormous influence over the Governor’s Office, the State Legislature and the State’s regulatory panels, commissions and panels.

Big Oil’s tentacles extend far and wide in California politics. Lobbying is just one of the methods that Big Oil uses in California to exercise inordinate influence over California regulators. WSPA and Big Oil wield their power in 7 major ways: through (1) lobbying; (2) campaign spending; (3) serving on and putting shills on regulatory panels; (4) creating Astroturf groups; (5) working in collaboration with media; (6) creating alliances with labor unions; and (7) contributing to non profit organizations.

A classic example of deep regulatory capture in California is how Catherine Reheis-Boyd, the President of the Western States Petroleum Association, chaired the Marine Life Protection Act (MLPA) Initiative Blue Ribbon Task Force to create “marine protected areas” in Southern California at the same time that she was lobbying for new oil drilling off the West Coast. Yet corporate “environmental” groups strongly supported the oil lobbyist-led process, claiming it was “open, transparent and inclusive” when it was anything but.

Photo: Climate justice activists block L Street in front of the State Capitol in late September for a protest against Gavin Newsom's expansion of oil and gas drilling in California. Photo by Dan Bacher.
Add Your Comments
Support Independent Media
We are 100% volunteer and depend on your participation to sustain our efforts!