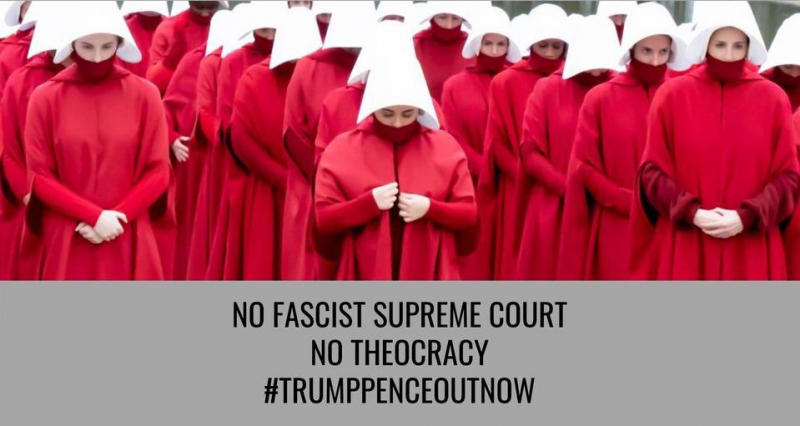 original image (959x511)
Senate Republicans cannot wait to fill the seat of Ruth Bader Ginsburg, who was a life-long fighter for the rights of women, and who came to symbolize the hopes of so many who yearn for gender equality.

Barrett’s confirmation would cement a pro-fascist majority on a court that has already begun to erode women’s right to birth control and abortion, legalize discrimination against LGBTQ people, sabotage voting rights, eviscerate the separation of church and state and usher in white supremacist, Christian theocratic control. The Nazi regime remade the courts in the same way, so that by the time they were rounding up people, much of their heinous actions were perfectly legal.

It's up to us to say NO! to the theocratic rule of Christian Patriarchy.

We will don the white bonnets and blood red cloaks of the dystopian Handmaid’s Tale — a living tableau exposing and opposing the real-life Christian fascist Handmaid’s Tale the Trump/Pence regime is aggressively hammering into place.

Email NorCal [at] RefuseFascism.org to reserve your costume.

We must turn grief into action, dread into hope, and struggle now with all we’ve got to change the course of history — not stopping until the Trump/Pence regime has been driven from power!
Millions have hoped that normal channels can stop the danger of the Trump/Pence regime. But those norms are being incinerated, turned into dead ends. We, who ache at this moment must take the future into our own hands, mobilizing a mass protest movement that fills the public squares across the country to demand the removal of this fascist regime and not stop until our demand is met. With so much at stake, we cannot wait for November to act.

Mark your calendars with the following actions:

Saturday October 24 and 31, 2:00 pm
In the Street 'til this Fascist Regime is GONE!
Civic Center Plaza, directly across from City Hall

We urge individuals and organizations to contact us; we must work together in this historic undertaking. In the Name of Humanity, We REFUSE to Accept a Fascist America!
https://www.facebook.com/events/1005646259...
Add Your Comments
Support Independent Media
We are 100% volunteer and depend on your participation to sustain our efforts!