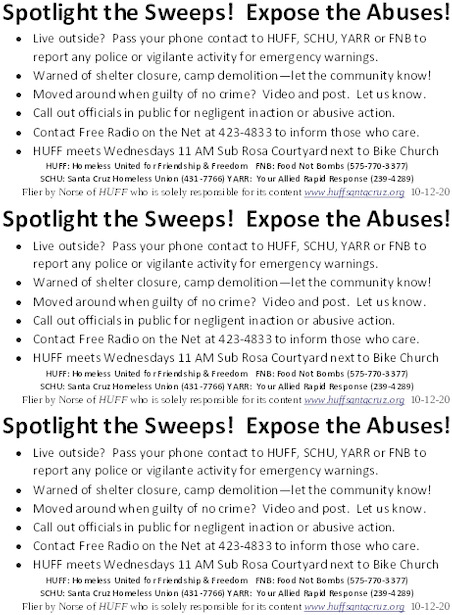 Download PDF (465.2KB)
The first protest began at 10:30 AM the smaller parking lot abutting the abandoned Taco Bell business-displaced for a larger downtown gentrification project. It marched through town down Pacific Ave., taking the street.

The second, organized by Carlos of the COLA4ALL UCSC struggle assembled at the Town Clock at 3 PM.

I distributed this flyer at the first protest.considering that even in the unlikely victory of Brown, Kumars, Hill, and Kuhl, City Manager Bernal's staff will still be ruling the roost and the four as a group unlikely to even consider firing him.

Their "sweep away the homeless" policy that has long been a bigoted Santa Cruz police, ranger, and public works tradition.

The law requires waiting a number of months after the election before the City Manager is replaced (though I don't know that's ever happened).

Local Native Americans were enslaved and murdered more directly, but the same dehumanization continues for those classified as "other" as the unhoused are.
http://www.huffsantacruz.org
Add Your Comments
Support Independent Media
We are 100% volunteer and depend on your participation to sustain our efforts!