Add an Event
Newswire
Calendar
Features
Home
Donate
From the Open-Publishing Calendar
From the Open-Publishing Newswire
Indybay Feature
Related Categories: California | Peninsula | Racial Justice
Junipero Serra Statue Attacked in Bay Area
by Celebrating Indigenous Peoples' Day
Monday Oct 12th, 2020 9:49 AM
Last night, the statue of Junipero Serra was defaced and covered in red paint to signify the colonial violence and genocide that has been and continues to be enacted upon the Indigenous people of this land, specifically in this context by spanish imperialism and the catholic church. 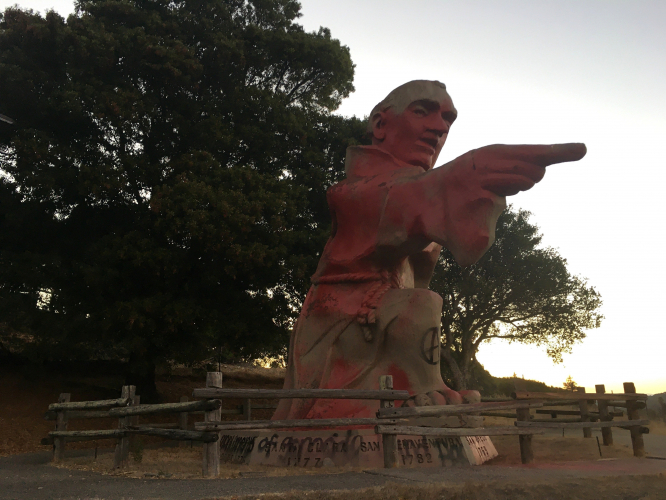 original image (4032x3024)
From so-called "San Mateo, California," unceeded Ramaytush and Ohlone land, we strive as settlers to act in solidarity with the ongoing Indigenous resistance that has taken place on this land in the past 500 years.

Junipero Serra, an 18th century roman catholic missionary, was a notable perpetrator of these atrocities. Under his leadership, tens of thousands of Indigenous people were forcibly subjugated and brutalized, using the several missions that Serra established as the predominant tool through which to enact this coercion and extreme violence. This act of vandalism intends to condemn the catholic church as an entity as well, which is wholly responsible for these heinous acts.

The genocide of the Indigenous people of Turtle Island is ongoing. We have seen just a small sample of the eventualities of this colonial, white supremactist, patricarchial violence play out in concrete ways in so-called California, with the consequences of environmental degredation and climate disaster manifesting in devastating fires over the last few months.

84 racist/colonial monuments have come down and stayed down over this Hot Summer. The destruction of these mostly confederate and colonial monuments have been viewed as a major threat to the illusion of order in this land, as witnessed in the repressive executive order that promises 10 years in prison for anyone who attacks the "legitimacy of our institutions" through the vandalism of monuments. Statues and monuments are symbols that reinforce a particular relationship to historical memory. When they are torn down, they signify the relationship between governed and government, the very idea of nationhood, being toppled.

The state has always acted in the interest of colonizers like Serra and against Indigenous, Black, Brown, and other oppressed people. We see this familiar dynamic play out in the state's response to the COVID pandemic, where working people are left with no resources and incarcerated people are left to die in prison; in the lack of response to the climate crisis as fires rage across the West Coast; and in the State's attempts to brutally repress the Black Liberation Movement and uprising that have erupted in the last 5 months.

We are in an unprecedented moment as trust erodes against the state. Now is the time for a decentralized insurgency to emerge and attack the infrastructure and culture of white supremacy. We do not consent to be governed. 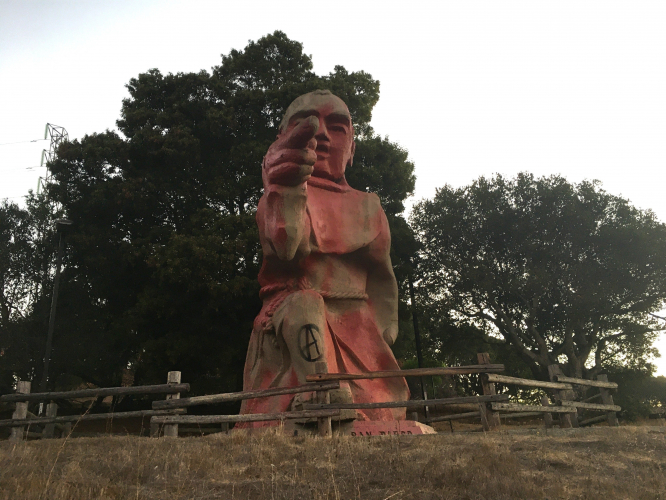 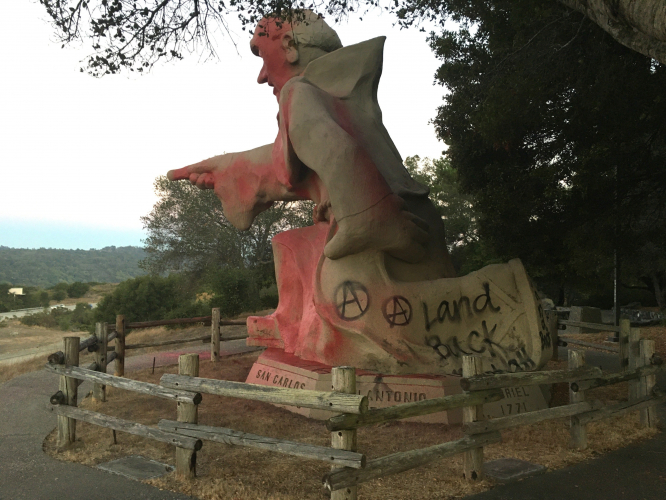 original image (4032x3024)
Add Your Comments
LATEST COMMENTS ABOUT THIS ARTICLE
Listed below are the latest comments about this post.
These comments are submitted anonymously by website visitors.