“Governor Newsom needs to go back to the drawing board and tackle the state’s biggest polluters head-on," said Nagy. "We’re losing patience with his lack of meaningful action." 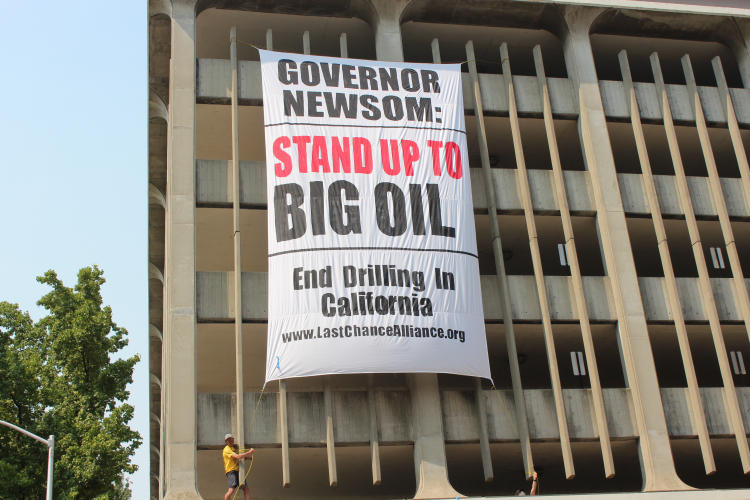 original image (5184x3456)
California Governor Gavin Newsom signed an executive order on October 7 making California the first state in the nation to pledge to conserve 30 percent of land and coastal waters by 2030, joining 38 countries in that conservation commitment.

While some environmentalists lauded the order, other public interest groups weren’t impressed, with Food and Water Watch urging the governor instead “to go back to the drawing board and tackle the state’s biggest polluters head-on.” The group criticized him for expanding oil and gas drilling in California during a year of an unprecedented pandemic, record heat and record wildfires.

“Once again, California is taking on the mantle of global climate leadership and advancing bold strategies to fight climate change,” said Governor Newsom. “The science is clear that, in our existential fight against climate change, we must build on our historic efforts in energy and emissions and focus on our lands as well. California’s beautiful natural and working lands are an important tool to help slow and avert catastrophic climate change, and today’s executive order provides important new tools to take on this existential threat.”

The order directs state agencies to “deploy a number of strategies to store carbon in the state’s natural and working lands and remove it from the atmosphere. The order also sets a first-in-the-nation goal to conserve 30 percent of the state’s land and coastal water by 2030 to fight species loss and ecosystem destruction.”

Specifically, state agencies are directed to “pursue innovative actions, strategies and partnerships to maximize the full climate benefits of our natural and working land,” through:

“The governor has helped move the nation forward today by establishing California as the first state to embrace 30 by 30,” said Phillips. “He has also required that identifying how to achieve the 30 by 30 goal will involve a stakeholder process. That’s important. We all need to work together to effectively address the climate emergency.”

“Scientists tell us that to mitigate the climate crisis and protect communities, we must protect nature,” stated Brune. “This order brings our country closer to protecting the 30 percent of lands and waters that experts say is needed to avoid the worst consequences of climate disruption, with a host of benefits for our air, water, wildlife and families along the way. Sierra Club is committed to ensuring this process improves access to nature for communities most harmed by the climate crisis and loss of green space.”

However, Food & Water Action California State Director Alexandra Nagy criticized Newsom for failing to deliver on climate change while his administration has issued over 2,600 oil and gas drilling permits this year so far.

“Once again, Governor Newsom talks a big talk about climate change, and once again he fails to deliver,” said Nagy. “More than 2,600 fossil fuel drilling permits issued by his administration this year are contributing to climate chaos, not addressing it. Until Newsom acknowledges the urgent need to halt new oil and gas drilling instead of encouraging it, he can never be taken seriously as a climate leader.”

“Governor Newsom’s plan recognizes the water scarcity crisis California faces, yet he ignores the fact that fracking for oil and gas requires vast sums of water that could otherwise be diverted to sustainable agriculture, fire prevention and many other worthwhile needs. Newsom’s hypocrisy when it comes to water management is glaring,” she stated.

“Relying more deeply on California’s faulty cap-and-trade system to address climate woes is almost worse than doing nothing, as it allows for business-as-usual by the biggest fossil fuel and factory farm polluters in the state, while placing an ever-increasing health and environmental burdon specifically on low-income areas and communities of color,” said Nagy.

“Governor Newsom needs to go back to the drawing board and tackle the state’s biggest polluters head-on. We’re losing patience with his lack of meaningful action," Nagy concluded.

Since Newsom become Governor in January 2019, his regulators have approved a total of 7071 oil and gas drilling permits in California, according to the data from Consumer Watchdog and the FracTracker Alliance.

The permit numbers and locations are posted and updated on an interactive map at the website: NewsomWellWatch.com

The executive order directs the California Natural Resources Agency to form a California Biodiversity Collaborative to bring together experts, leaders and communities to pursue a unified approach to protecting biodiversity and develop strategies to support the 30 by 30 goal. Through this inclusive stakeholder process, Californians will help chart the path forward to these critical conservation goals.

30 by 30 has been championed internationally and is supported by a concerted United Nations effort. In addition, international NGOs and business groups – including the International Chamber of Commerce – wrote a letter in June calling upon CEOs to push governments to include ambitious policies to reverse nature loss as part of green recovery plans. The World Economic Forum recently calculated that $44 trillion of economic value generation – over half the world’s total GDP – is potentially at risk as a result of climate change and the dependence of business on nature and its services.

Today’s executive action follows Governor Newsom’s historic executive order in late September to require that, by 2035, all new cars and passenger trucks sold in California be zero-emission vehicles.
Add Your Comments
Support Independent Media
We are 100% volunteer and depend on your participation to sustain our efforts!