Add an Event
Newswire
Calendar
Features
Home
Donate
From the Open-Publishing Calendar
From the Open-Publishing Newswire
Indybay Feature
Related Categories: U.S. | Government & Elections
Harris refuses to oppose Trump’s planned 2020 election coup
by Patrick Martin (WSWS Repost)
Thursday Oct 8th, 2020 8:22 AM
The Democratic candidate was asked what her party’s response would be to Trump seeking to remain in office in defiance of the voters. 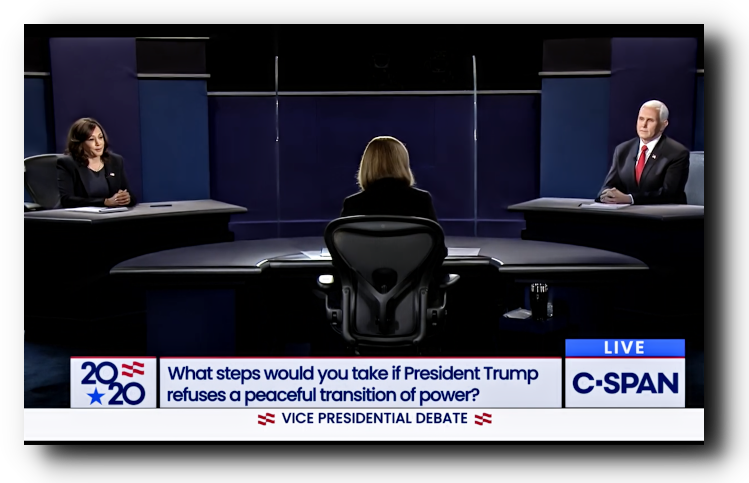 Only one question mattered at the vice presidential debate held Wednesday night in Utah between Senator Kamala Harris and Vice President Mike Pence, and it was the last one posed by debate moderator Susan Page of USA Today.

This is the question of questions. Indeed, it is the only serious issue that remains in an election where voting has already begun and is to conclude on November 3, only 27 days away. Trump has repeatedly threatened not to abide by the results of the voting, and the further he falls behind in the opinion polls, the more strident have become his threats.

The moderator was asking Senator Harris, and by extension the entire Democratic Party, what would she and Biden be prepared to do in the event that President Trump defies the Constitution and seeks to remain in office after an electoral defeat—in effect, setting himself up as a dictator in defiance of the will of the American people.

Harris’s response was that the Democrats will do nothing. They will take no action to defend the Constitution or the democratic rights of the American people.

Initially, when Page announced that the topic of the final question was to be the election itself, Harris tried to filibuster, insisting on additional time to profess her opposition to police violence, despite her record as a law-and-order California attorney general.

When finally compelled to answer the question of the election, she embarked on a description of the “coalition” behind the Democratic campaign, listing the large number of Republicans, including “seven members of President George W. Bush’s cabinet” and “over 500 generals” supporting the Biden-Harris ticket.

She then appealed, “Here is what I would like to say to everybody. Vote. Please vote.”

But the question is what, given Trump’s announced intention not to honor the results of the vote which are likely to show a heavy defeat, will be done to enforce the vote? On this Harris was silent.

She continued, “We will not let anybody subvert our democracy, which is what Donald Trump has been doing, as he did on the debate stage last week, when again, in front of 70 million people, he openly attempted to suppress the vote,” before concluding almost plaintively, “Please vote.”

It could not be clearer. Asked about what the Democrats would do if Trump refuses to accept the result of the election, Harris cited the support of Republicans and generals for Biden. So the decision as to whether Trump or Biden is to occupy the White House will not be made by the American people on Election Day, it will be made by right-wing politicians and the military.

What would a genuinely democratic response have been to that question? It is not hard to formulate. The senator need only have explained the significance of the question posed by Page, “So you are asking, what will we do if Trump stages an insurrection and defies the Constitution of the United States? This has only happened once before in American history, in 1860, when 11 Southern states refused to accept the election of Abraham Lincoln. Our response will be Lincoln’s response: We will unequivocally defend the Constitution; we will not negotiate with him; and we will use every means necessary to suppress an insurrection aimed at overthrowing the vote of the people.”

Harris did not say this because the Democratic Party is incapable of taking such a stand. It will not defend democracy and the Constitution against Trump, because it is a party of Wall Street and the military-intelligence apparatus. Their worst fear is not a Trump dictatorship, but that an uncontrollable political crisis in America could touch off a social explosion and open the way to revolutionary struggles of the working class that would threaten the capitalist system.

The parameters of Harris’s response were already laid down by former Vice President Biden in the speech he made Tuesday at Gettysburg, Pennsylvania. Biden could have chosen the site of the bloodiest Union victory in the Civil War to warn Trump and his fascist co-conspirators that the democratic rights of the American people were paid for in blood and will not be given up lightly. He did nothing of the kind.

Instead, he chose the Civil War battlefield for an appeal “to revive the spirit of bipartisanship in this country, the spirit of being able to work with one another.”

Biden did declare, echoing the words of Lincoln’s Gettysburg Address, “It cannot be that here and now in 2020 we will allow the government of the people, by the people and for the people to perish on this Earth.” But for the Democratic Party, this is not a call to arms but a wail of despair.

Only three months ago, Biden said that his “greatest fear” was that Trump would not accept the results of the election. Now that Trump has repeatedly rejected a “peaceful transfer of power,” Biden’s fear has trailed off to a whimper.

In the 2000 election, the Democrats capitulated to a right-wing political coup that made use of the Supreme Court to give it a “legal” cloak. In 2020, they are preparing to do the same, only on a much larger scale. They are declaring that they will not fight Trump’s threatened coup, and Trump hears that message loud and clear.

The rest of the vice presidential debate was of no political consequence. The two candidates lied endlessly, sparred over minor issues, and postured as friends of the ordinary people, although they represent rival factions of the same class of millionaires and billionaires.

Harris said, correctly, that Trump failed to alert the American people about the danger of the COVID-19 pandemic when he learned about it in January. But the Democrats will not alert the population about the danger of a presidential coup d’état, and they are fully aware of it now, in October. Nor will they take any action to prevent it.

The defense of democratic rights cannot proceed through the Democratic Party or any institution of the capitalist ruling elite. It requires an independent movement from below, from the working class, based on a socialist and revolutionary program.

https://www.wsws.org/en/articles/2020/10/0...
Add Your Comments
LATEST COMMENTS ABOUT THIS ARTICLE
Listed below are the latest comments about this post.
These comments are submitted anonymously by website visitors.