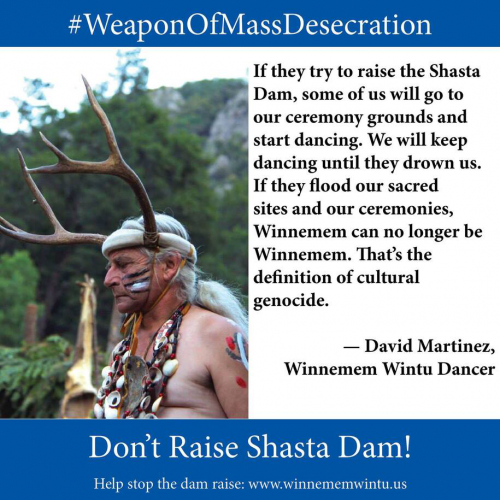 original image (915x915)
SACRAMENTO – On October 5, California Attorney General Xavier Becerra sent a comment letter to David Brick of the Bureau of Reclamation opposing the Trump Administration’s effort to raise the Shasta Dam by up to 18.5 feet.

Reclamation has been pushing the dam raise proposal for years to deliver more Sacramento River water to the Westlands Water District and other wealthy agribusiness interests in the San Joaquin Valley.

The Winnemem Wintu Tribe, other California Tribes, environmental groups and fishing organizations are opposing the proposal, saying the plan would result in the destruction of imperiled salmon and steelhead populations and the inundation of the remaining sacred cultural sites of the Winnemem Wintu.

In the comment letter, Attorney General Becerra argues that the proposal by the U.S. Bureau of Reclamation (Bureau) relies on an “incomplete draft supplemental environmental impact statement.”

“Raising the level of the Shasta Dam poses significant adverse effects on the free-flowing condition of the McCloud River and on its wild trout fishery. This effort would have a significant negative impact on the river’s fisheries and habitats, and submerge sacred sites of the Winnemem Wintu Native American Tribe,” according a statement from Becerra’s Office.

“The Trump Administration should stop tampering with California’s waters,” said Attorney General Becerra. “The latest attempt to unlawfully raise the Shasta Dam is a poorly-cloaked move to evade the Clean Water Act. As long as Trump officials keep trying to skirt the rules, we’ll keep them honest.”

In the comment letter, Attorney General Becerra asserts that the Bureau can’t fast-track the project under the Clean Water Act because Congress hasn’t authorized the dam raise. Becerra also said the Bureau would need permits from the State Water Resources Control Board and other authorities to proceed.

In addition, the letter stresses that the project “could degrade habitat for threatened fish in the San Francisco Bay-Delta, including juvenile salmon, California Central Valley steelhead, longfin smelt and Delta smelt.” Further,

“The Bureau’s environmental analysis also fails to disclose the degradation to riverfront habitat, which would accelerate the loss of the western yellow-billed cuckoo and Shasta snow-wreath;

The Bureau must consult with the U.S. Fish and Wildlife Service and the National Marine Fisheries Services before proceeding with the proposed dam raise;

The Bureau’s environmental analysis fails to propose actions to offset environmental damage from the dam raise. It also unlawfully ignores state-law protections for the McCloud River and the river’s wild trout fishery;

The Bureau must consult with tribes and address impacts to cultural resources. The proposed project would eliminate approximately 20 sacred Winnemem Wintu sites, including a burial ground and prayer rock;

The Bureau failed to address comments submitted by state agencies during earlier iterations of the permitting process under the National Environmental Policy Act; and

The 602-foot-tall Shasta Dam and 4.55 million-acre-foot Shasta Reservoir, the largest reservoir in California, are located on the Sacramento River in Northern California north of Redding.

In February 2020, the Bureau set aside $8 million for preconstruction engineering and design work to raise the dam and enlarge the Shasta Reservoir, in spite of strong opposition to the project by Tribes, fishermen, conservationists and elected officials.

In June 2020, the Trump Administration requested construction funding in the federal budget to raise Shasta Dam.

The Winnemem Wintu, who held war dances at Shasta Dam against the raising of dam in 2004 and then again in 2014, call the dam raise a “Weapon of Mass Desecration.”

“How would you feel if someone was coming to burn down your house, everyone knew it was going to happen, but no one — not even the people who are supposed to protect you — cared enough to stop it,” said Marine Sisk, Chief Caleen Sisk’s daughter, on Winnemem sacred sites that would be drowned by the proposed raise of Shasta Dam.

David Martinez, a Winnemem Wintu Dancer, explained the extreme danger the raising of the dam poses to the Tribe.

“If they try to raise the Shasta Dam, some of us will go to our ceremony grounds and start dancing,” said Martinez. “We will keep dancing until they drown us. If they flood our sacred sites and our ceremonies, Winnemem can no longer be Winnemem. That’s the definition of cultural genocide.”

Providing irrigation water to the Westlands Water District and other corporate agribusiness interests so they can grow almonds and other crops for export “is the sole purpose of exporting more water that the north state cannot afford to ship from mountain streams and rivers,” said Caleen Sisk, Chief of the Winnemem Wintu Tribe. “Especially when there are no efforts to help maintain the high mountain streams, rivers, meadows, and trees. You have already taken all that can be taken without now DRYING UP the source. Get rich some other way!”

In a major conflict of interest David Bernhardt, the Secretary of Interior, is a former lobbyist for the Westlands Water District, the main proponent of the dam raise proposal.

The Bureau claims the dam raise is necessary to expand the cold water pool in Shasta Reservoir that is intended to improve Sacramento River habitat for endangered winter-run Chinook salmon, but the Winnemem says otherwise.

“However, the U.S. Fish and Wildlife Service’s analysis, as well as Winnemem Wintu Traditional Ecological Knowledge, has determined the dam raise would not improve conditions for Sacramento River salmon runs,” according to an action alert from the Tribe. “In fact, the Bureau has proven incapable of managing water for fish survival. In 2015-2016, mismanagement of the water chiller device led to 95 percent of the salmon eggs being killed by warm water in the Sacramento River.”

“In fact, a 2009 Biological Opinion concluded that for endangered salmon to survive climate change, they have to be able to access the Winnemem Waywacket and other waterways in the high country above the Keswick and Shasta dams. The proposed Shasta Dam raise would actually damage this potential salmon habitat through inundation and the destruction of about 4,800 acres of riparian habitat,” the Tribe stated.

The Tribe noted that planning on the dam raise began more than 30 years prior to the Biological Opinion. “The dam raise project was never intended to benefit salmon, and the Bureau’s intentions are clearly to benefit Central Valley water users and brokers,” they concluded.

In addition to the threat the dam raise poses to Winnemem sacred sites and imperiled salmon, steelhead and Delta and long fin smelt populations, Earthjustice recently obtained documents revealing that the Bureau of Reclamation knew the dam raise poses a significant seismic risk but hid it: https://www.nrdc.org/experts/doug-obegi/raising-shasta-dam-even-worse-idea-we-knew

“Reclamation has identified a significant seismic risk problem at Shasta Dam that may preclude the enlargement of Shasta Dam in a safe manner,” wrote Doug Obegi, NRDC lawyer in his blog. “These risks have not been publicly disclosed and are not mentioned at all in the Draft Supplemental EIS. We only learned about them thanks to public records disclosed to Earthjustice under FOIA.”

Why does the Newsom Administration appear so deeply committed to the construction of the Delta Tunnel, since the majority of Californians, including tribal leaders, Delta farmers, conservationists, recreational and commercial fishermen, Delta businesspeople and elected officials, oppose it?

It is no surprise that Governor Newsom received a total of $755,198 in donations from agribusiness in 2018, based on data from http://www.followthemoney.org. That figure includes $116,800 from Beverly Hills agribusiness tycoons Stewart and Lynda Resnick, the largest orchard fruit growers in the world and the sponsors of the Coalition for a Sustainable Delta, a corporate agribusiness Astroturf group that promotes increasing water exports out of the Sacramento-San Joaquin River Delta.

By backing the Delta Tunnel, promoting the voluntary water agreements, overseeing the issuing of a new draft EIR that increases water exports for the state and federal projects rather than reducing them, and releasing a controversial water portfolio, could it be that Newsom is bending to the will of his agribusiness donors in the San Joaquin Valley, the same folks that are pushing Interior Secretary David Bernhardt’s plan to raise Shasta Dam?

The Draft Supplemental EIS is available at: https://www.usbr.gov/mp/nepa/nepa_project_details.php?Project_ID=1915
Add Your Comments
Support Independent Media
We are 100% volunteer and depend on your participation to sustain our efforts!