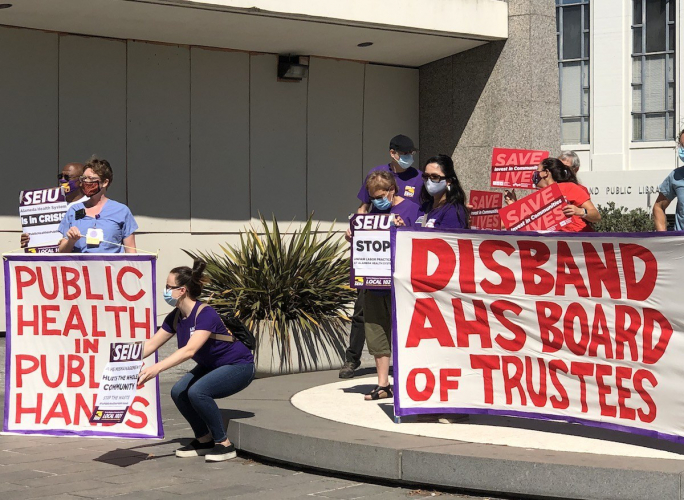 original image (1200x877)
Over 3,000 workers at Alameda Health System will be going out on a 5 day strike against privatization, outsourcing and lack of proper health and safety protection. They are also fighting the Alameda Board of Supervisors who have turned over the Alameda public health system to union busters.
https://www.facebook.com/JuneteenthSPT
§Stop Systemic Racism & Union Busting
by SPTESR
Monday Oct 5th, 2020 8:44 PM 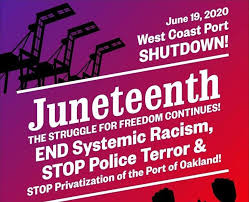 The fight against privatization and contracting out in New Orleans against sanitation workers and the attacks on SEIU 1021 and CNA workers at the Alameda Health System are connected. They are both attacking Black, Brown and poor working class people who are fighting for justice
https://www.facebook.com/JuneteenthSPT
§Solidarity From New Orleans To AHS Highland Hospital
by SPTESR
Tuesday Oct 6th, 2020 8:50 AM 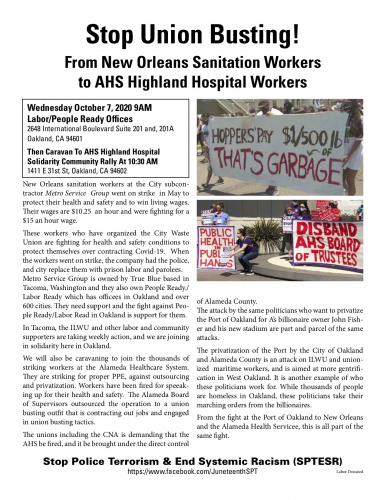 New Orleans sanitation workers at the City subcon- tractor Metro Service Group went on strike in May to protect their health and safety and to win living wages. Their wages are $10.25 an hour and were fighting for a $15 an hour wage.

These workers who have organized the City Waste Union are fighting for health and safety conditions to protect themselves over contracting Covid-19. When the workers went on strike, the company had the police, and city replace them with prison labor and parolees.
Metro Service Group is owned by True Blue based in Tacoma, Washington and they also own People Ready./ Labor Ready which has officees in Oakland and over 600 cities. They need support and the fight against People Ready/Labor Read in Oakland is support for them.

In Tacoma, the ILWU and other labor and community supporters are taking weekly action, and we are joining in solidarity here in Oakland.

We will also be caravaning to join the thousands of striking workers at the Alameda Healthcare System. They are striking for proper PPE, against outsourcing and privatization.

Workers have been fired for speeaking up for their health and safety. The Alameda Board of Supervisors outsourced the operation to a union busting outfit that is contracting out jobs and engaged in union busting tactics.

The unions including the CNA is demanding that the AHS be fired, and it be brought under the direct control of Alameda County.

The attack by the same politicians who want to privatize the Port of Oakland for A’s billionaire owner John Fisher and his new stadium are part and parcel of the same attacks.

The privatization of the Port by the City of Oakland and Alameda County is an attack on ILWU and unionized maritime workers, and is aimed at more gentrification in West Oakland. It is another example of who these politicians work for. While thousands of people are homeless in Oakland, these politicians take their marching orders from the billionaires.

From the fight at the Port of Oakland to New Orleans and the Alameda Health Servicee, this is all part of the same fight.