Add an Event
Newswire
Calendar
Features
Home
Donate
From the Open-Publishing Calendar
From the Open-Publishing Newswire
Indybay Feature
Related Categories: California | Central Valley | Environment & Forest Defense | Government & Elections
Climate Advocates Criticize Newsom's Executive Order for Not Addressing Oil Drilling
by Dan Bacher
Thursday Oct 1st, 2020 6:15 PM
“If your climate leadership does not include relief for hundreds of thousands of Californians -- the majority people of color -- living with oil drilling in their neighborhood, then you are not serious about climate justice and creating healthier, more resilient communities,” said Martha Arguëllo executive director of Physicians for Social Responsibility-Los Angeles and co-chair of STAND-L.A. 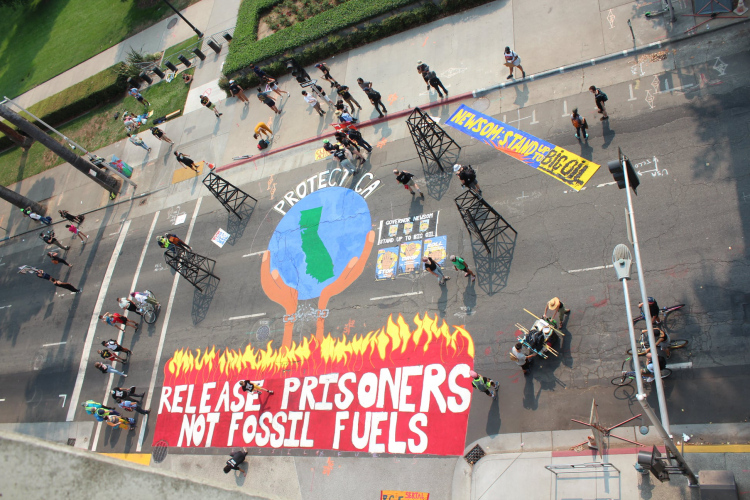 original image (1944x1296)
SACRAMENTO – California Governor Gavin Newsom on September 23 signed an executive order (EO) requiring sales of all new passenger vehicles to be zero-emission by 2035, along with additional measures to eliminate harmful emissions from the transportation sector.

Newsom said the transportation sector is responsible for more than half of all of California’s carbon pollution, 80 percent of smog-forming pollution and 95 percent of toxic diesel emissions.

“This is the most impactful step our state can take to fight climate change,” said Governor Newsom. “For too many decades, we have allowed cars to pollute the air that our children and families breathe. Californians shouldn’t have to worry if our cars are giving our kids asthma. Our cars shouldn’t make wildfires worse – and create more days filled with smoky air. Cars shouldn’t melt glaciers or raise sea levels threatening our cherished beaches and coastlines.”

Following the order, the California Air Resources Board will develop regulations to mandate that 100 percent of in-state sales of new passenger cars and trucks are zero-emission by 2035 – a target that would achieve “more than a 35 percent reduction in greenhouse gas emissions and an 80 percent improvement in oxides of nitrogen emissions from cars statewide, “according to Newsom.

“In addition, the Air Resources Board will develop regulations to mandate that all operations of medium- and heavy-duty vehicles shall be 100 percent zero emission by 2045 where feasible, with the mandate going into effect by 2035 for drayage trucks. To ensure needed infrastructure to support zero-emission vehicles, the order requires state agencies, in partnership with the private sector, to accelerate deployment of affordable fueling and charging options. It also requires support of new and used zero-emission vehicle markets to provide broad accessibility to zero-emission vehicles for all Californians,” Newsom stated.

In his press conference, Newsom noted that the executive order will not prevent Californians from owning gasoline-powered cars or selling them on the used car market,

“California will be leading the nation in this effort – joining 15 countries that have already committed to phase out gasoline-powered cars and using our market power to push zero-emission vehicle innovation and drive down costs for everyone,” the Governor added.

The executive order also sets “clear deliverables for new health and safety regulations that protect workers and communities from the impacts of oil extraction. It supports companies who transition their upstream and downstream oil production operations to cleaner alternatives. It also directs the state to make sure taxpayers are not stuck with the bill to safely close and remediate former oil fields.”

After the signing of the executive order, climate and environmental justice advocates criticized Newsom for his failure to take on the oil industry, the most powerful corporate lobby in California. The Western States Petroleum Association, the trade association for the oil industry in the states of California, Oregon, Washington and Arizona, is the largest and most powerful corporate lobbying group in California — and has enormous influence over the Governor’s Office, the Legislature and the state regulatory agencies and commissions.

Since he become Governor in January 2019, Newsom’s regulators have approved a total of 7071 oil and gas drilling permits in California, according to the data from Consumer Watchdog and the FracTracker Alliance. The permit numbers and locations are posted and updated on an interactive map at the website: NewsomWellWatch.com

Representatives of member groups of the Last Chance Coalition commented on the Governor’s announcement.

“Governor Newsom has once again missed the point when it comes to real climate action: In order to stem the devastating impacts of greenhouse gas emissions, we must halt new fossil fuel drilling and fracking now, not later. Gov. Newsom just doesn’t get it, or he apparently doesn’t care,” said Alexandra Nagy, California Director with Food & Water Action. “Today’s announcements are infuriatingly more of the same from Newsom: Lofty words and predictions, but no meaningful action. He has repeatedly vowed to protect our communities, air and water from toxic oil and gas operations, yet drilling in the state has expanded under his watch.

“If your climate leadership does not include relief for hundreds of thousands of Californians -- the majority people of color -- living with oil drilling in their neighborhood, then you are not serious about climate justice and creating healthier, more resilient communities,” said Martha Arguëllo executive director of Physicians for Social Responsibility-Los Angeles and co-chair of STAND-L.A.

“Today, millions of Californians are suffering from the ill effects of living near oil and gas drilling. And, California remains one of the only oil producing states without an oil/gas safety buffer zone. To be a climate justice leader, Newsom needs to adopt setbacks immediately,” said Ingrid Brostrom, an environmental justice attorney and Assistant Director of the Center on Race, Poverty & the Environment.

“Governor Newsom acknowledges the immediacy of the climate crisis, and the record-breaking heat waves and fires show the serious costs California is facing today. But he continues to focus on actions that are years into the future - while continuing to approve new oil and gas extraction across the state today,” said Matt Leonard, Campaign Manager at 350.org. “When you are in a hole - the first step is to stop digging. Newsom needs to immediately cease any expansion of the oil & gas industry, and initiate a just transition to phase out existing production”.

“Setting a timeline to eliminate petroleum vehicles is a big step, but Newsom’s announcement provided rhetoric rather than real action on the other critical half of the climate problem - California’s dirty oil production,” said Kassie Siegel, director of the Center for Biological Diversity’s Climate Law Institute. “Newsom can’t claim climate leadership while handing out permits to oil companies to drill and frack. He has the power to protect Californians from oil industry pollution, and he needs to use it, not pass the buck.”

“Newsom truly believes this is a “climate damn emergency,” he must take bold action in line with what science demands,” said Caroline Henderson, Senior Climate Campaigner at Greenpeace USA.
”He has the ability right now to immediately halt new oil and gas permits; to put forth a bold plan for a fossil fuel phaseout; and to commit to a gold-standard public health and safety buffer that will keep our communities safe from the harms of oil and gas drilling. Vague statements of support won’t fix the climate crisis, nor will they protect the wellbeing of frontline communities living near drilling sites.”

Sierra Club: Executive Order Is a step towards climate action in transportation sector

In response to the signing of the Executive Order (E0), Sierra Club California said the EO “takes a step toward climate action in the transportation sector, but more action is needed to avoid the worst climate catastrophe in California.”

“A year of pandemic has been difficult. But when compounded with the effects of climate change, the year in California has been tragic and, for many, nearly unbearable.

“State leaders began to address climate change nearly two decades ago. Yet the steps taken haven’t been fast enough or big enough to match the need.

“Governor Newsom’s executive order will help advance climate action in the transportation sector at a time when it is most needed. It will also strengthen efforts to protect public health from fossil fuels. And separately, he has committed to working to ban fracking.

“This action today is an important first step to help move further away from the fossil fuels that have created this worldwide crisis.

“But so much more needs to happen here and across the country. And it needs to happen with an eye toward creating clean air communities and clean, good-paying jobs, as the governor indicated in his order today.

“We look forward to further action by the governor in the coming days and weeks to fulfill his promise to swiftly move on substantial climate action.

“There’s much left to do to quickly cut climate pollution from electricity, buildings and fuels production.

“Only a suite of bold action across sectors will avert a climate catastrophe.”

Big Oil lobbyist: How could this work?

Catherine Reheis-Boyd, President of the Western States Petroleum Association (WSPA), wasn’t impressed by Newsom’s Executive Order. She responded to the EO in the following statement:

“We have to understand how this could work. It’s interesting that the governor was standing in front of nearly $200,000 worth of electric vehicles as he told Californians that their reliable and affordable cars and trucks would soon be unwelcome in our state.

‘Big ideas are only better if they are affordable for us all and can be backed by science, data and needed infrastructure. There are many questions about all of those concerns in the Governor’s orders.

‘Dismantling our oil and natural gas industry right now means betting everything on alternative energy resources that we don’t have in place and a supporting infrastructure that’s far from being at the scale we need.”

The reason why the Newsom administration is approving increasing numbers of oil and gas permits is due to the uncomfortable fact that the oil industry is the most powerful corporate lobby in California and exercises enormous influence over the Governor’s Office, the State Legislature and the State’s regulatory panels, commissions and panels.

Big Oil’s tentacles extend far and wide in California politics. Lobbying is just one of the methods that Big Oil uses in California to exercise inordinate influence over California regulators. WSPA and Big Oil wield their power in 6 major ways: through (1) lobbying; (2) campaign spending; (3) serving on and putting shills on regulatory panels; (4) creating Astroturf groups; (5) working in collaboration with media; (6) creating alliances with labor unions; and (6) contributing to non profit organizations.

A classic example of deep regulatory capture in California is how Catherine Reheis-Boyd, the President of the Western States Petroleum Association, chaired the Marine Life Protection Act (MLPA) Initiative Blue Ribbon Task Force to create “marine protected areas” in Southern California at the same time that she was lobbying for new oil drilling off the West Coast. Yet corporate “environmental” groups strongly supported the oil lobbyist-led process, claiming it was “open, transparent and inclusive” when it was anything but.

For more information, read: http://www.counterpunch.org/…
Add Your Comments
Support Independent Media
We are 100% volunteer and depend on your participation to sustain our efforts!