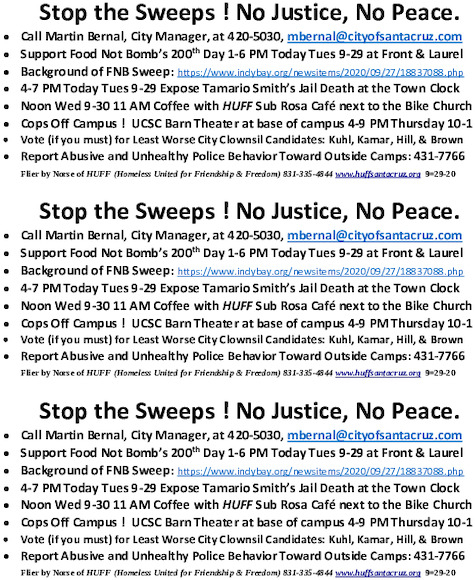 Download PDF (567.5KB)
RETALIATION FOR CITY MANAGER BERNAL?
In what may have been a retaliatory response to FNB's announcement of a 200th day celebration September 29th last week, City Manager Public Relations Mouthpiece Susie O'Hara began circulating word evictions of the meal and surrounding camps were slated for Monday.

She and her assistant Megan Bunch circulated among the survival camps on or near the lot next to the Santa Cruz Community Credit Union warning that the City would forcibly remove people beginning on that day.

NO SHELTER ALTERNATIVES
Activists claimed there were no real alternatives being given to those so frightened with threats of property seizure and/or arrest. There was no indication there were other options than the COVID-19 vulnerable indoor group "shelters" such as Laurel St., the Armory, and the Paul Lee Loft. The County-run Containment Camp that dispersed and replaced the larger Benchlands encampment is due to close later this month.

RESISTANCE RISING
In response around 40 activists and camp residents gathered in a large circle and shared support strategies for those under threat. The suggestions included 24-hour vigiling, an emergency contact system, medical support in the event of police violence, and a broad non-violent commitment to resist the forced removal of unhoused people being proposed.

With the exception of the brief appearance of a K-9 unit, police did not appear on the lot that day, according to one D'Angelo Cooper, a long-time unhoused leader, repeatedly targeted by police for insisting on her right to shelter-in-place. The vigil is apparently slated to continue through the week.

RESIDENT RESPONSE
Most tent residents appeared to be staying where they were, though some moved to the site of the former Taco Bell restaurant at Pacific and Laurel or elsewhere. The number of tents elsewhere in the City (along hiway 1 and along the levee) has massively increased in recent weeks. Parks and Recreation crews have blocked off the Pogonip entrance areas along Hiway 9 with "no parking" signs and were seen removing what may have been campsites yesterday.

The pavilions under which Food Not Bombs and the SC Union distributes food and clothing may be set up for longer periods of time than the weekday noon-6 PM schedule they've maintained for months at this site.

SUPPORT THE RESISTANCE
Those interested in supporting the Resistance should bring supplies and volunteer offerings to the parking lot at Laurel and Front Sts.

HUFF will be meeting today (Wednesday 9-30) at 11 AM at the Sub Rosa Cafe at 703 Pacific next to the Bike Church in support of the Resistance.
§Interviews from the Successful Blockade
by Robert Norse (rnorse3 [at] hotmail.com)
Friday Oct 2nd, 2020 4:19 AM
https://www1.huffsantacruz.org/lost/FRSC%2010-1-20.mp3
http://www.huffsantacruz.org
Add Your Comments
Support Independent Media
We are 100% volunteer and depend on your participation to sustain our efforts!