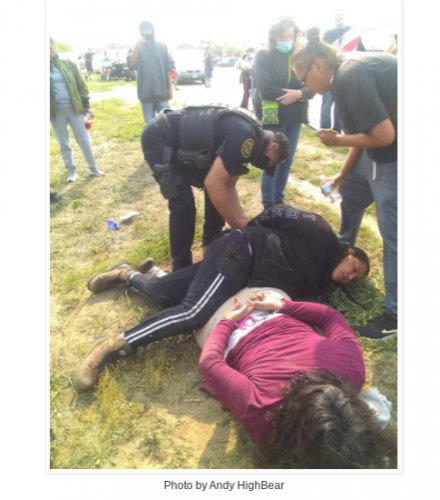 Joye Braun, Cheyenne River Lakota, said, "Ziebach County Sheriff showed up on their own. They are not cross deputized they had no legal right to intervene on our Cheyenne River Sioux Tribal members much less make threats, mock people and escalate a situation."

TaSina Sapa Win said, Cheyenne River Lakota, was among those arrested. "Norman Schuler (a city cop, not tribal), roughed my wrist up pretty good while out of his jurisdiction."

"Our Fight and plea were not with the Cheyenne River Sioux Tribal Police. We were peaceful, and have been from the get-go. The message we wanted to send out was for the seven Cheyenne River Sioux Tribal Council Representatives who hold a high office on this reservation, asking for them to resign, or get impeached, for meeting behind the Oyates back, holding shady back door deals, trying to sell us out to TransCanada Energy (KXL)."

"It became clear the police were more than happy to hurt our people when they targeted one of our white allies. Then turned on the people they were supposed to protect and serve. We did not want this to have to go this far. Cheyenne River Sioux Tribal police instigated, by pulling out tasers and using excessive force."

"They pushed down an elder who was merely standing by and asking the police to stop," White Eyes said of the excessive force by police.

Jasilyn Charger, Cheyenne River youth who was among the Lakota youths leading the movement to protect the water from the Dakota Access Pipeline at Standing Rock, said, "Wopila to all the family for your support and solidarity and the camera. The police brutality needs to stop."

TaSina Sapa Win called out for the impeachment of the Cheyenne River councilmen who met behind closed doors with TransCanada KXL pipeline. 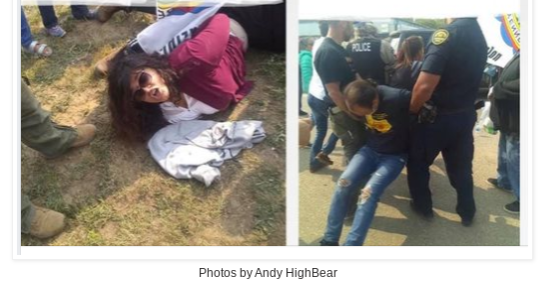 Photos copyright Andy HighBear
https://bsnorrell.blogspot.com/2020/09/lak...
Add Your Comments
Support Independent Media
We are 100% volunteer and depend on your participation to sustain our efforts!