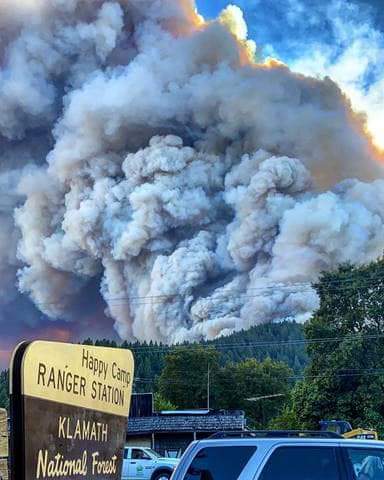 Happy Camp – The Karuk Tribe on September 16 declared a state of emergency in the wake of the deadly Slater Fire that has burned many homes of Karuk Tribe members in the Klamath River community of Happy Camp.

The Tribe passed a resolution authorizing the use of Department of Treasury CARES Act funding to “address the unbudgeted housing needs created by the devastating Slater Fire while adhering to COVID protocols,” according to a press release from the Tribe.

“The resolution will be forwarded to President Trump and Governor Newsom asking the both to add Karuk Tribal lands and surrounding areas to the list of California counties approved for assistance to individuals and households as part of the Major Disaster Declaration, which President Donald J. Trump initially granted on August 22, 2020 due to multiple massive wildfires,” the release stated.

As of the morning of September 16, the Slater Fire has burned more than 140,000 acres between Happy Camp on California Highway 96 and O’Brien along Oregon Highway 199 along the California/Oregon border.

The Tribe said “about 150 homes” have been damaged or destroyed in the small community of Happy Camp, California. Many of these homes belong to Karuk Tribal members and their families.

“This fire is devastating our Tribe and our community,” said Karuk Chairman Russell ‘Buster’ Attebery. “The fire moved so fast that folks had little time to collect essentials before fleeing for their lives. A lot of people have nothing left but the clothes on their backs.”

The Tribe said surrounding communities are rallying to help those in need, but the fire danger has not passed and horrific air quality conditions hamper relief efforts.

in an essay published in the UK Guardian on the same day as the declaration Bill Tripp, director of natural resources and environmental policy for the Karuk Tribe, wrote that the solution to the devastating West Coast wildfires “is to burn like our Indigenous ancestors have for millennia.”

”As wildfires rage across California, it saddens me that Indigenous peoples’ millennia-long practice of cultural burning has been ignored in favor of fire suppression,” wrote Tripp. “But it breaks my heart, that regardless of our attempts to retain our cultural heritage and manage our homelands in a manner consistent with our Indigenous customs, the Slater fire is burning down the homes of our tribal members, our tribal staff and our community.”

Visit the incident's Facebook page for updates throughout the day at: https://www.facebook.com/SlaterAndDevilFireInformation

Evacuation orders remain in effect for a few neighborhoods in Happy Camp where downed power lines and hazardous materials remain a concern.

Evacuation warnings are still in place for most of Happy Camp including Elk Creek Road, and for Seiad along Highway 96, as well as for Gasquet, Hiouchi and Big Flat.

On September 8, environmentalist and author Bill McKibben drew the connection between the wildfires and climate change in a tweet: “California has already set a new record for wildfire this year--and Sept and Oct are usually the worst months. This is what a climate crisis looks like.”

Photo of Slater Fire in Happy Camp courtesy of the Karuk Tribe.