Politics, Race, and the State of Play in our Nation w/ W. Kamau Bell & Steve Kerr 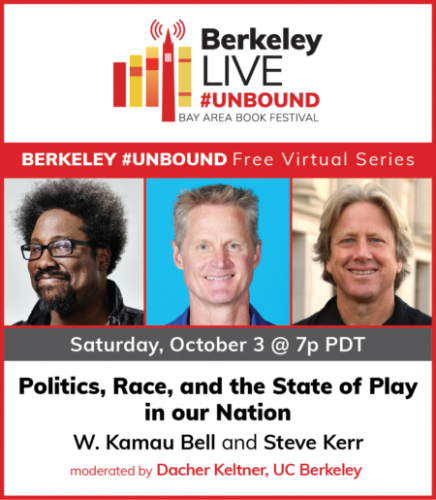 Cost: $10 for Zoom link
(We will send all ticket buyers a Zoom Webinar link and password the day before the event)

It’s 2020, the year of all hell breaking loose—so why not let it break loose in friendly (and hilarious) company?

Good friends and headline-makers W. Kamau Bell, an Emmy-winner for CNN’s United Shades of America (Robin Williams called him “ferociously funny”), and Steve Kerr, outspoken head coach of the three-time NBA champs Golden State Warriors, are teaming up to raise the good kind of hell, talking all things race, power, dissent, the intersection of sports and activism, and comedy as coping mechanism and vehicle for truth.

In a free-wheeling conversation refereed by yet a third friend of theirs, Dacher Keltner, founding director of UC Berkeley’s Greater Good Science Center, the comedian and the coach will hold nothing back, and you’ve got (virtual) courtside seats. Berkeley might have been famous in the 1960s for its free speech movement, but this 21st century version—as uncensored and envelope-pushing as 2020 demands—might just teach us new ways of speaking truth to power.

Laugh, cheer, reflect, and get fired up (and maybe a little out of bounds) with this totally unique conversation, only in Berkeley #UNBOUND.

W. Kamau Bell
Sociopolitical comedian W. Kamau Bell is the host and executive producer of the Emmy Award-winning CNN docuseries United Shades of America with W. Kamau Bell. His Netflix special, Private School Negro, was praised by TIME for “finding the comic absurdity in darkness,” and he is the author of The Awkward Thoughts of W. Kamau Bell: Tales of a 6’4”, African American, Heterosexual, Cisgender, Left-Leaning, Asthmatic, Black and Proud Blerd, Mama’s Boy, Dad, and Stand-Up Comedian. Full bio.

Steve Kerr
Currently in his sixth season as head coach of the Golden State Warriors, Steve Kerr has guided the club through four of the most prolific seasons in NBA history, with a list of accomplishments that includes three NBA championships and four of the five most victorious seasons in franchise history. He is also the first to win three NBA titles as a player and three as a coach. He’s also an outspoken activist for racial justice who the Guardian has called “an essential voice of reason in a world in which reason dies on cable news,” a vocal supporter of Black Lives Matter, a proponent of gun control, and a persistent thorn in the President’s side. Full bio.

ABOUT: Berkeley #UNBOUND of the Bay Area Book Festival

On Sunday, October 4, the Bay Area Book Festival presents Berkeley #UNBOUND, an all-day, free, virtual mini-festival — kicked off with a ticketed keynote program on Saturday night, October 3. Just a month before the election, Berkeley #UNBOUND will gather many of the world’s most influential thinkers, writers and other trailblazers to offer bold visions in response to this moment of political and social crucible facing our nation.

Bay Area Book Festival #UNBOUND the virtual branch of our celebrated programming, amplifying bestselling and emerging voices across all genres. #UNBOUND explores compelling topics such as voter suppression, parenting in a time of anxiety, racism, health and wellness, and more — along with brilliant literary discussions. Our children’s and young adult programs present top authors who are interviewed by youth!

END_OF_DOCUMENT_TOKEN_TO_BE_REPLACED
Added to the calendar on Fri, Sep 18, 2020 12:32PM
Add Your Comments
Support Independent Media
We are 100% volunteer and depend on your participation to sustain our efforts!