Add an Event
Newswire
Calendar
Features
Home
Donate
From the Open-Publishing Calendar
From the Open-Publishing Newswire
Indybay Feature
Related Categories: California | Environment & Forest Defense
California: The Center of the White-West is Burning
by David Andersson
Monday Sep 14th, 2020 2:31 AM
First we need to send all our best wishes of well-being to our friends, brothers and sisters in California who are confronting an unprecedented disaster. The fires there are absolutely ferocious. 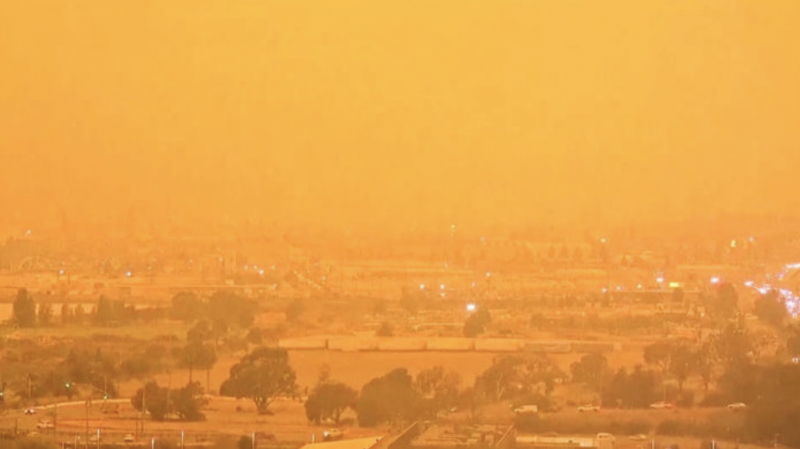 original image (1396x784)
California is the biggest state in the country and is the world’s fifth-largest economy, according to data released in May 2018 by the U.S. Department of Commerce. Its 2017 Gross State Product was $2.747 trillion, surpassing the United Kingdom’s $2.625 trillion Gross Domestic Product.

These fires are not a natural disaster but are human made. California could have been a beacon of cultural and social transformation, using the energy and dynamic of the 1960’s social movements to orient society in a new direction: supporting a balanced ecology, developing an innovative and energy-smart public transportation system, opening new architectural avenues for public housing, transforming and democratizing the economical structure, using technology to increase access to direct democracy and expand political participation. California could have produced a whole new social model, having everything in its hands to do it — the people, the coast line, the sun, the land, and the support of the rest of the country.

But now tomorrow has come, and the American Dream has become a nightmare. Climate change is very real and California has done little about it. It is not a question of political left or right, Republican or Democrat, but a question of culture, where having 2 or 3 cars per family is the norm, where public transportation is devalued, where making money is the priority (there are currently 170 billionaires in California alone).

So now what? The same opportunities exist there today as 60 years ago. The issue is what model do they choose, what values do they prioritize, what project toward the future do they launch? Are we really going to humanize this world and stop pretending to do it? Will we start working together — private, public, local, national, international — for real collaboration and solidarity, with the understanding that my freedom must not infringe someone else’s freedom? Can we all agree to ban the use of violence to resolve our conflicts, that science should be accepted as our ultimate knowledge, that money and economy must be at the service of humanity and social development (and not the reverse), that there is nothing more important that our fellow human beings and their wellbeing? If we learn to treat people well, we will treat nature and the animal kingdom well too.

We can only hope that these fires will burn our illusions and reveries about our present society and will open our minds and hearts. We must become active in the current of humanization that has been working for over 50 years with the same proposals: to put personal development at the same level as social development (there is not one without the other); to treat others as you want to be treated; to prioritize reconciliation over revenge; to oppose violence in all its forms and to take part in the nonviolent movement that has saved humanity many times over (from India, the US to Ireland and South Africa and much more). The decisions we make now will have repercussions for generations to come.

https://www.pressenza.com/2020/09/californ...
Add Your Comments
Support Independent Media
We are 100% volunteer and depend on your participation to sustain our efforts!