Add an Event
Newswire
Calendar
Features
Home
Donate
From the Open-Publishing Calendar
From the Open-Publishing Newswire
Indybay Feature
Related Categories: U.S. | Government & Elections
Trump has no concrete strategy for restoring economic growth or for defeating CoViD19
by R Nutting
Friday Sep 11th, 2020 2:26 AM
Trump is faking it on the economy, just as he’s faking it on the pandemic, just as he’s faked everything his whole life 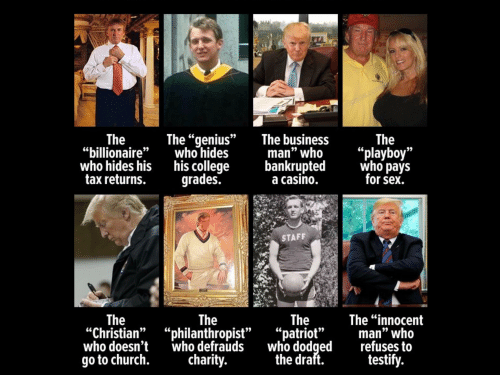 It was my job to go over after a couple of hours and gently tell her: “Make-believe time is over. Let’s go scrub the real dirt off your face, put some real food in your body, and get you ready to have more wonderful adventures in your dreams.”

Faking it is the only thing Donald Trump has ever been good at. We’re finding out more of the details of how he built his real estate empire on a pile of lies and a mountain of unpaid taxes. His career in show business was built on faking being a boss. His political career was built on lies about Barack Obama, Hillary Clinton, immigrants, Gold Star parents, his Republican primary opponents, and the help he sought and got from Russia.

And his presidency has been an endless deep fake, especially the lie that the economy, which hundreds of millions Americans built, is his achievement alone.

Donald Trump did not build that economy. His signature policies—a hugely irresponsible and unnecessary tax giveaway to corporations and the wealthy, a mindless trade war with all of our trading partners, and the wholesale abolition of regulations that keep workers, consumers, the environment and the economy safe—had almost no effect on the growth rate or the number of jobs or the stock market.

His economic policies have been just like Trump himself: Loud, brash and largely ineffective.

Here are the facts, using the same metrics that Trump himself brags about:

U.S. gross domestic product grew at a 1.9% annual rate from the time Trump was inaugurated in 2017 through first quarter of this year when the coronavirus hit, a bit slower than the 2.4% annual growth rate in the equivalent period just before Trump took office.

Not only did Trump not build the best economy ever, he didn’t budge it from its trend. Until the coronavirus hit.

The coronavirus has exposed all of Donald Trump’s fakery. He doesn’t understand the economy any better than he understands the pandemic. That’s part of the reason the U.S. is failing so badly, with than 5.7 million COVID cases and 28 million people collecting unemployment checks.

Prophetic: Audaciously, Trump is running for re-election as the Hero of the Coronavirus War

What’s more, he doesn’t understand the president’s role in a crisis, which is to be a steady leader who inspires us all make the necessary sacrifices to achieve success.

In other words, a crisis is no time to fake it. Character counts in times like these.

You don’t have to fool all the people all the time; you just need 270 electoral votes.

Trump’s responses to the pandemic and to the economic crisis it created have been a failure. Trump has failed to grasp what almost everyone else has: That the economy cannot recover fully unless the pandemic is brought under control. There is no trade-off between the public health and a strong economy, because the economy can never recover until it’s safe to go about our lives again.

The economy had to be locked down to give public health authorities time to prepare to defend the nation against the virus. But that time was squandered. Hospital capacity was beefed up as required, but the other essential steps to control the pandemic weren’t taken, in part because Trump failed as a leader.

A crisis is no time to fake it. Character counts in times like these.

His failure began with his lack of empathy for those stricken, and it continued with his attempt to shift the blame for his own failures onto China. He refused to coordinate the complex task of quickly testing for infections, tracking possible vectors and isolating the infectious, which is the only way to contain the virus absent an effective and universal vaccine.

When he did try to lead us, it was mostly in the wrong direction. He denied the severity of the virus, he promoted quack cures, and he fought against and politicized the common-sense measures that would have made a difference, such as wearing masks and avoiding large crowds. He undermined the authority of his own experts and even questioned the value of testing.

He still brags about the one bold step he took, but that was ineffective, because his ban on travel from China and Europe didn’t stop U.S. residents from bringing the virus into the country.

His response to the economic crisis was nearly as bad. He wisely kept out of the way in the early days when Democrats and Republicans in Congress actually agreed to the large CARES relief package, which gave or lent billions to small businesses, families and unemployed workers to bide them over.

Soon enough, Trump began to agitate to reopen everything before the testing, tracking and isolation regime was ready. Under his direction, governors prematurely removed the restrictions on social distancing and allowed the virus to spread further.

Then Trump began to promote quack cures for the economy, such as a payroll-tax holiday that would do nothing for those suffering the most, or a capital-gains tax cut that would further reward the wealthy, who have largely escaped the worst of the pandemic, both physically and financially.

He expressed no interest in renewing the relief measures that had already worked. And so we still don’t have a relief package, a month after many effective measures expired. It’s no surprise that job growth is slowing and consumer confidence is tumbling.

Trump denies the depth of economic misery, and blames those who’ve been laid off for not rushing back into unsafe working conditions. He demands that schools and sporting events return to business as usual without taking any precautions. He insists that everything will be OK, but does nothing to hasten that day.
Great salesman

And yet, Trump gets his best marks from voters on his handling of the economy. Despite all the evidence to the contrary, many still believe that he’s the genuine article, not a fake.

Trump may be a lousy president, but he’s a great salesman and he knows better than most that if you boast with confidence, there’s almost nothing you can’t persuade people to believe. Some people run on their record, but Trump knows it’s better to lie about your record and run on that.

People often confuse confidence for competence. You don’t have to fool all the people all the time; you just need 270 electoral votes.

Trump is running for re-election, but he has no concrete plans for his second term, just a list of wishes. He still doesn’t have a strategy for getting the virus under control, or for reopening the economy safely.

For the first time ever, the Republican Party is refusing to adopt a party platform. The party that made its mark fighting against slavery and communism and in favor of freedom and limited government now finds itself unable to articulate what it believes in beyond blind loyalty to the supreme leader.

Trump himself has no idea what he would do in a second term. Friendly interviewers have given him softball questions about what he hopes to achieve in the next four years, but he always comes up blank.

Instead of a party platform, Trump’s campaign has released a list of 50 “core priorities” for a second term, but the list is remarkably short on specifics. It reads like a list of New Year’s resolutions, with lofty goals such as creating 10 million jobs, “returning to normal in 2021” and wiping out global terrorism, along with garden-variety graft such as “expanding opportunity zones.” The only things missing are the vows to lose 10 pounds and to call your sister more often.

In other words, Trump is still faking it. He knows what people want to hear, but he has no clue how to make any of it happen.

Unfortunately, Trump’s presidency is not a game of make-believe. It’s as real as 24 million people out of work, and as final as 177,000 deaths.

I’m here to tell you gently: Make-believe time is over. 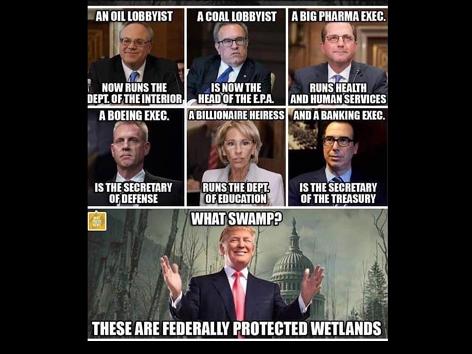 Drain the Swamp
Add Your Comments
Support Independent Media
We are 100% volunteer and depend on your participation to sustain our efforts!