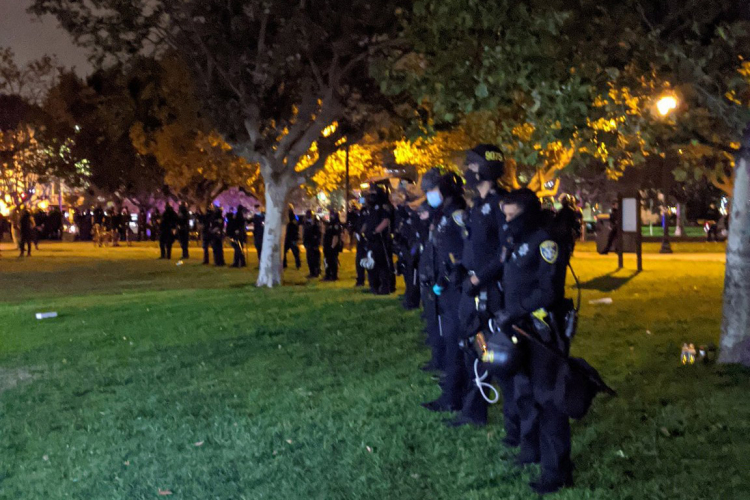 original image (1152x768)
[ This is the line of cops that surrounded the remaining protestors, to the left out of frame, backed up to Lake Merritt. Protestors asked OPD directly and repeatedly if there was a dispersal order. No response. ]

On Saturday, August 29th, a beautiful crowd gathered at Lake Merritt to mourn the death of the martyrs of the rebellions. It was called for by a group of anonymous youth organizers who led a prayer in Punjabi and preached the importance of keeping our comrades safe. The march kicked off with the following quote by Assata Shakur: "It is our duty to fight for our freedom. It is our duty to win. We must love each other and support each other. We have nothing to lose but our chains."

The group took off down Grand amidst a massive police presence and after turning onto a residential road, police began tear gassing, beating, and arresting protestors. Courageous comrades young and old made a dynamic shield wall to protect the march as police continued to block exists and terrorize children as young as thirteen years old. The shield wall was able to move fluidly through the crowd pulled together to protect one another with a fierce loving and supportive energy.

The teargas and flashbangs were unsuccessful in dispersing the crowd or creating panic. The cops were pushing up against the back of the march while simultaneously flanking the sides and blocking roads. They used the LRAD to announce a dispersal order while they continued to block any exit. Despite these challenges, youth leaders were able to change routes to avoid being kettled and got the crowd back to the vigil safely with very few arrests. At the vigil, comrades were able to exit in small groups while a crowd held their ground against a large, aggressive police line that outnumbered the remaining crowd 2:1.

The city of Oakland and Libby Schaaf have made it clear that they are willing to teargas a youth led demo in a residential neighborhood in order to protect the business interests of Lakeshore, which is one of the earliest locations of anti-Black gentrification in Oakland.

The vigil remains lit and colorful at the Pergola of Lake Merritt and is being taken care of by local houseless community members.

Up until this point, OPD's strategy has been hands-off in the hopes of decreasing public outrage over police brutality and weakening the movement, while simultaneously terrorizing Black and Brown neighborhoods in West and East Oakland that are removed from the public eye. This second wave of police repression is meant to crush the remaining movement and scare people from coming out.

Now is the time to collectively reignite. They are hoping this abrupt increase of force will make the movement die down and scare us into submission. Now is the time to come back stronger than before and show them we won't back down. Libby Schaaf has hundreds upon hundreds of police being paid overtime in order to teargas and terrorize a march led by high school aged kids. This is unacceptable.

§Video by 𝐫𝐞𝐧𝐞 𝐦𝐨𝐫𝐫𝐢𝐬𝐨𝐧
by YAR
Sunday Sep 6th, 2020 2:06 PM
Copy the code below to embed this movie into a web page:
Download Video (6.7MB) | Embed Video
March lasted about an hour, with OPD completely outnumbering demonstrators and following the march with dozens of vehicles crammed with more police. There were at least five people detained tonight.

Two medics were detained and released, but the medic van was impounded again. The medic van was not a part of the march, but was parked near the lake and targeted by police. Also, I witnessed one NLG observer being shoved to the ground by OPD during the first bull rush.
https://twitter.com/renepakmorrison/status...
§Oakland Police Impounds the Medic Van
by via Cat
Sunday Sep 6th, 2020 2:15 PM 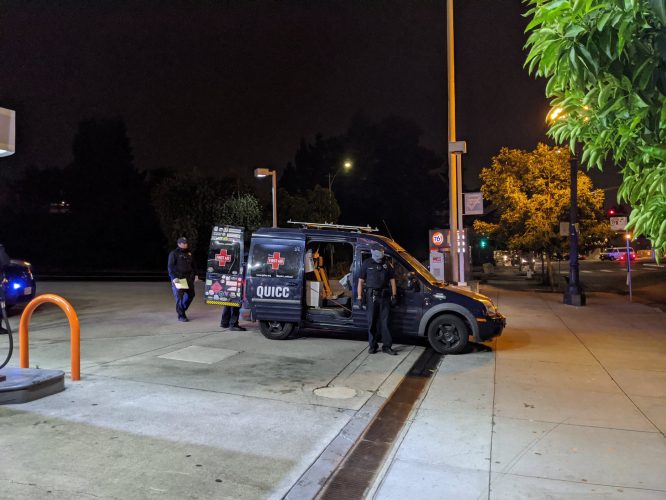 original image (2048x1536)
First aid van. They're doing this because they want to punish anyone who helps protesters.
§OPD Surround and Impound the Medic Van
by via Cat
Sunday Sep 6th, 2020 2:17 PM 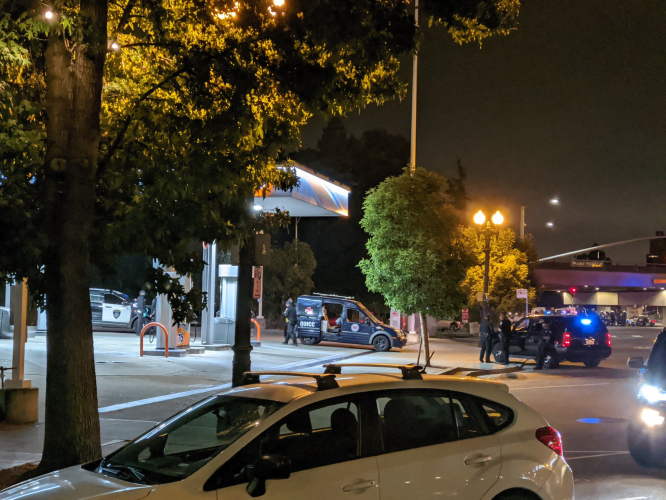 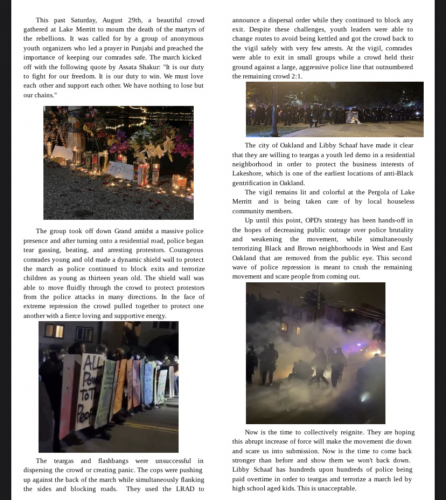 original image (828x927)
This Sunday we will speak out against her oppressive administration and make her listen to the youth's demands to defund and abolish the Oakland Police Department.